A Guide to Annuities for Seniors

Share: copied!
What Are Annuities? How Do Annuities Work? Downsides Planning for Later Right for You? Recap

Financial planning is a labyrinth at any age, but it becomes more of a tightrope walk as we enter retirement. Income streams become fixed and lower as we extend savings, pensions, and other components of our portfolio, all with one express purpose: we don’t want to outlive our money.

One of the ways the market has responded to the financial insecurity of seniors is by creating annuities, which are a financial product offered by insurance companies that can give seniors a lower-volatility way to guarantee income for the rest of their lives.

Like many financial products, however, annuities are not without controversy; they have vocal proponents and detractors alike. And the truth is, no matter what an expert says, everyone’s financial decisions are specific to them; so before investing in an annuity it’s best to consult a financial planner that knows your situation and can walk you through the best actions to take in your retirement planning.

In this guide, we’ll discuss the basics of annuities, some of the controversy surrounding them, and for whom they may be a good investment. 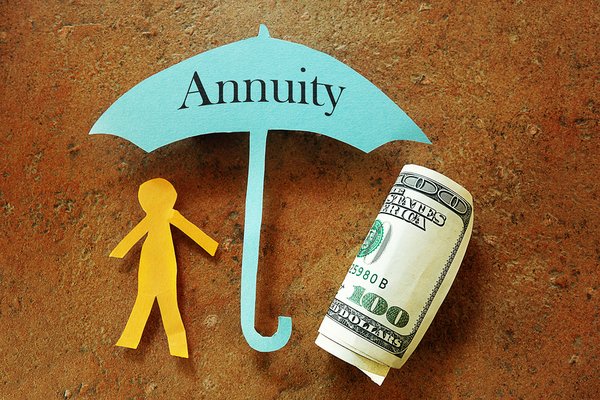 Like most financial products, annuities are complex and come in multiple forms, which makes them difficult to define with one broad stroke. A handy way to think about annuities is that they’re the exact opposite of life insurance. For life insurance, you pay in a small amount of money each week or month, and, should you unexpectedly pass, your beneficiary receives a predefined lump sum. With annuities, you pay in a large sum of money to the insurance company, they invest it, and then pay you out a certain amount each month, quarter, or year, typically for the rest of your life.

Ostensibly, an annuity means betting on you living longer than the insurance company thinks you will. If you were to invest $50,000 in an immediate annuity (meaning it begins paying out right away), the annuity may pay out around $200 per month if you were to begin collecting at age 70, but if you begin collecting at 80, that number could jump to $250 each month, for example.

The theory is that the insurance company has determined what your life expectancy is and how much they can feasibly pay out against your initial investment before they’re assuming loss. If you outlive their predictions, you stand to earn money beyond your initial investment because the annuity is guaranteed for life. It’s a bit morbid, to be sure, but life insurance is too when you get down to the nitty-gritty of it.

Now that we’ve given a broader definition of annuities, let’s look a little deeper at the specific types of annuities and how they work.

How Do Annuities Work?

To understand the ins and outs of annuities, it’s best to take a look at the different types of annuities that there are. Let’s begin by discussing immediate versus deferred annuities.

When you buy an annuity, you give a lump sum to an insurance company that takes the money and invests it. Because that money, in most cases, needs to cover you for the rest of your life, the financial products in which they’re invested tend to be low risk; think low-yield stocks and bonds that may only go up or down by 1-2% year over year.

An immediate annuity means you begin receiving payouts on your investment ASAP. A deferred annuity allows your initial investment to gain in the market for years before it begins paying out. If you buy an annuity at age 50 with the intent that it begins paying out when you’re 70, the investment has had 20 years to gain, which equals higher monthly or quarterly payments when it’s time to collect.

For those willing to take a greater risk with their annuity, there is the option to buy variable annuities (as opposed to fixed annuities). Variable annuities work much like standard investments. Your lump sum is invested in mutual fund-type accounts which can earn much more than traditional fixed annuities, but are subject to market fluctuations, meaning they can lose you money if the market tanks.

In short, annuities can be incredibly basic or incredibly complex, depending on how they’re treated. And these customizations come at a premium, which we’ll get into now.

What Are the Downsides of Annuities?

With how generally low-risk annuities are, one would think they’d be a relatively non-controversial choice among financial professionals. And while a number of advisers are more generous towards annuities citing that they’re more customizable and flexible than detractors give them credit for, there is still a vocal group against them.

Two of the big downsides of annuities are high fees and a lack of liquidity with your money. As we previously mentioned, annuities can be customized in a number of ways through riders, and the final result can be a much more robust investment product. They can even be set up like life insurance where, should you happen to pass before you’ve recouped the entirety of your initial investment, the money is passed down to benefactors, for example. Broker fees and service fees are high for this level of customization, however.

In fact, when the Department of Labor was looking to pass a fiduciary rule in 2016 that pretty much said brokers needed to act in their clients’ best interests, sales of annuities dipped substantially. Then, when the rule was overridden in 2019, sales of annuities surged. The reason brokers favor annuities is that they can make upwards of 10% in commission off the principal, which can mean a $10,000 payday on a $100,000 annuity sale, with fees increasing the more the annuity is amended and customized.

In short, because there’s an incentive for brokers to sell annuities and complicate them to increase commission, annuities have earned a reputation as predatory. If you’re interested in buying an annuity, it’s essential to shop around to various insurance companies and brokers in order to guarantee you find someone trustworthy who is acting in your best interest.

Similarly, there can be a lack of flexibility and liquidity with annuities which, when broken, can incur high fees. When you put a lump sum into an annuity, essentially you’re surrendering it to the terms of your contract. If you’ve invested $100,000 in a deferred annuity that isn’t set to pay out for 10 years, but after five you determine that you need $50,000 back for an emergency, that withdrawal can incur a penalty. Some annuities have a grace amount built in. For example, you may be able to withdraw $10,000 without a fee, but the additional $40,000 may see a penalty of 5% or more.

One final sticking point with annuities is that they’re primarily bought through insurance companies, which are not backed by the federal government in the same way that banks are. Because there is no FDIC insurance behind an annuity purchase, if the insurance company from which you purchased the plan happens to fold, you risk losing everything you invested. If you do plan to buy an annuity, make sure that the insurance company supplying it has a credit rating above an A quality. If you’re handing over a large sum of money, it better be to someone you can trust.

Why are Older Adults Often the Target for Annuities?

Older adults are typically the targets of annuities because annuities represent a safe means of financial planning later in life. When we’re of working age, there are a number of options that are available to us through IRAs, 401ks, stock investments and more; yet as we get older those options tend to dwindle, as does our desire to take risks with our money.

Annuities offer older adults a guaranteed income for the rest of their lives, which is a wonderful piece of mind motivation to invest. Also, and this is another huge draw of annuities, they are tax-deferred in the same way IRAs are. The gains made on an annuity aren’t subject to taxation in the same way as the capital gains in a standard savings account, which is another big motivator.

Another, more cynical read on annuities targeted towards older adults is the products can be complicated and inflexible, and brokers looking to take advantage of seniors looking for peace of mind in a safe investment can be hit immediately with high fees to invest and hit down the road with penalties. But again, finding a trustworthy broker acting in your best interest could help ameliorate some of these risks.

How Do I Know If Annuities are the Right Option for Me?

There is never a one-size-fits-all prescription for financial products, as everyone’s situation is different. Annuities also vary wildly in how they’re executed, which means they may fit someone perfectly while being a terrible investment for others.

A good potential situation to purchase an annuity, for example, could be an older adult nearing retirement that has a high amount of liquidity and wants to ensure that they’re going to receive consistent payments late in life. Investing $50,000 at age 55 in a low-risk, fixed deferred annuity set to pay out at age 75 might be a smart investment because the investor would get the peace of mind in knowing that as their other savings dwindle from ages 65-75, there is a safety net awaiting them. But, as always, a financial planner you trust will know your situation more intimately and can help inform these tough decisions.

Annuities are simple yet complicated financial products, and while they may seem like a smart investment, they can also offer inflexibility and high fees which can make them unsafe if your financial situation changes and you require more immediate access to your money.