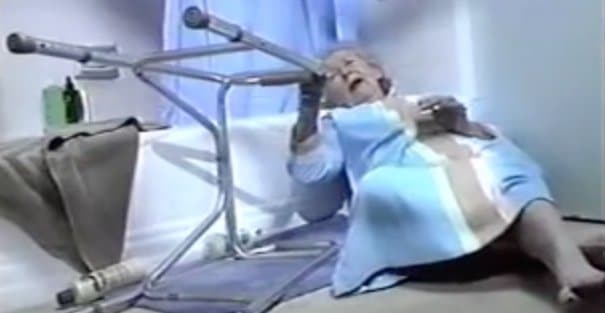 We decided to activate The Senior List Time Machine today, and bring you the very first commercial where the iconic term “I’ve fallen and I can’t get up” was uttered.  It occurred back in 1989 for a medical alert company called LifeCall.  The commercial was so campy it was a bit alarming (pun intended).  After “Mrs. Fletcher” falls, she yells those magic words to the dispatcher (reaching her through the base station) cementing LifeCall’s place in history.

The “I’ve fallen, and I can’t get up” ad had the double misfortune of being unintentionally campy and appearing often on cable and daytime television. The fact that the commercial was a dramatization (as clearly stated in the beginning of the commercial) using bad acting also contributed to the humor. The combination made “I’ve fallen… and I can’t get up!” a recognized, universal punchline that applied to many comedic situations. All of these factors made the ad memorable, ensuring the line’s place in pop culture history. — Wikipedia

Original Video: I’ve Fallen and I Can’t Get Up

We write a great deal about the best medical alert providers out there, and offer advice on how to shop for medical alert systems.  Today seemed like a good day to reflect back on the start of the medical alert revolution.  An industry that exploded with 7 simple words… “I’ve fallen and I can’t get up”.  Thanks Mrs Fletcher, for putting this industry on the map. Oh, and we’re sending help immediately! 🙂