When it comes to living, eating, and covering emergencies, there’s no doubt about it: Money matters. Yet, the average American household has less than $5,000. Nearly 30 percent have less than $1,000, an insufficient amount for covering emergency circumstances like replacing major automobile parts or paying medical bills.

Only the average baby boomer or Gen Xer would likely recover from these costs. The median household savings for those born before 1964 is $24,280, after all, while those born between 1956 and 1980 have a median savings of $15,780. Although time has likely helped them save, seniors can still be an essential honeypot of financial wisdom.

We surveyed 226 seniors and 612 millennials about finances and preparing for retirement. Their answers reveal not only the future of American financial health but also some key takeaways for how to best manage our money and live our twilight years in peace. Read on to hear from those who have learned how to be thrifty and frugal –or from those who are still working on it, like the rest of us.

As the saying goes, “everyone makes mistakes” – and when it comes to money, errors are sometimes inevitable. We asked seniors (people aged 55 and older) and millennials about their biggest financial miscalculations. 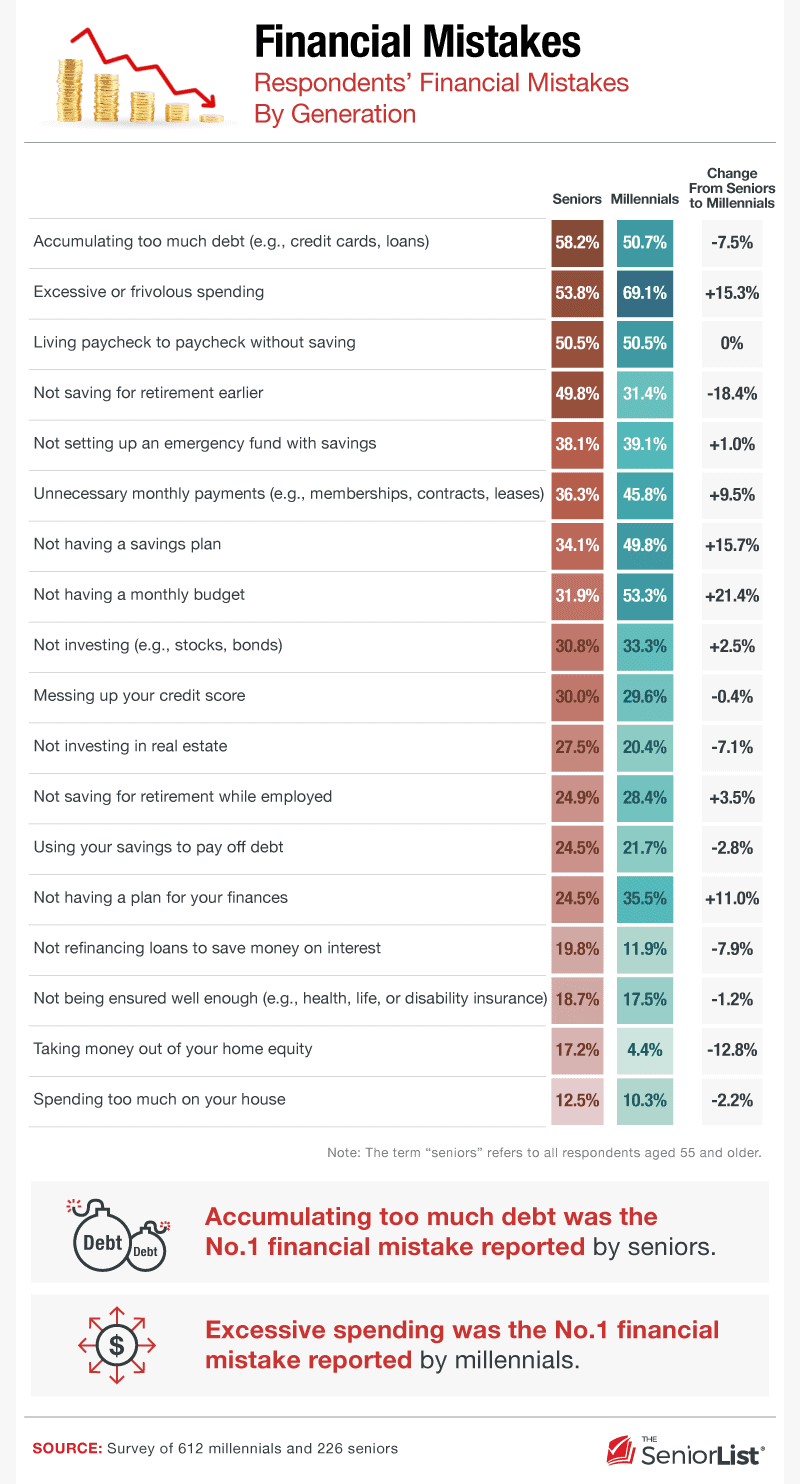 According to our survey results, seniors were the most likely to regret accumulating too much debt (58.2 percent of the sample said they did), spending money excessively or frivolously (53.8 percent), living paycheck to paycheck without saving (50.5 percent), and not saving for retirement early enough (49.8 percent). 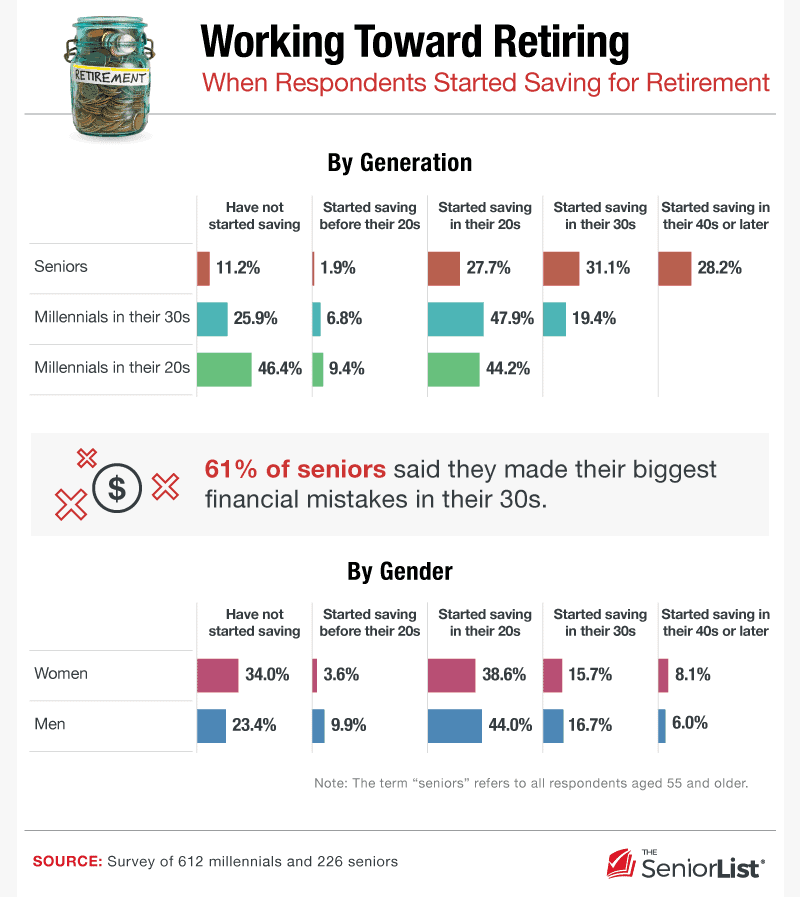 Interestingly, women appeared less likely to save early. Over a third of women had not started saving yet, compared to just under a quarter of men. Male respondents were most likely to start saving in their between their 20s to 30s.

These days, a growing number of people are advocating for financial literacy to be taught in American public schools. But where does financial education stand in the U.S. right now? 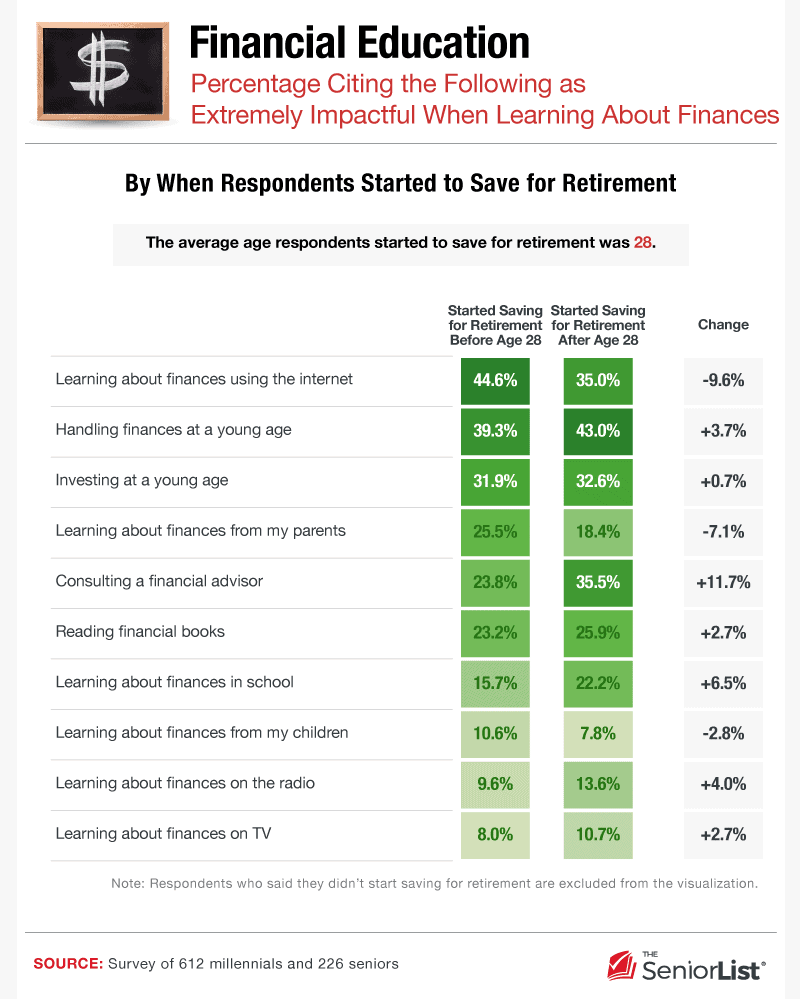 Among those who started saving before the age of 28, nearly 45 percent learned about finances using the internet, while others learned from experience – roughly 39 percent of respondents said they handled finances at a young age, while nearly 32 percent invested at a young age. Only about a quarter of respondents said they learned about finances from their parents.

After years of lived experience, what financial advice do seniors have for younger generations? 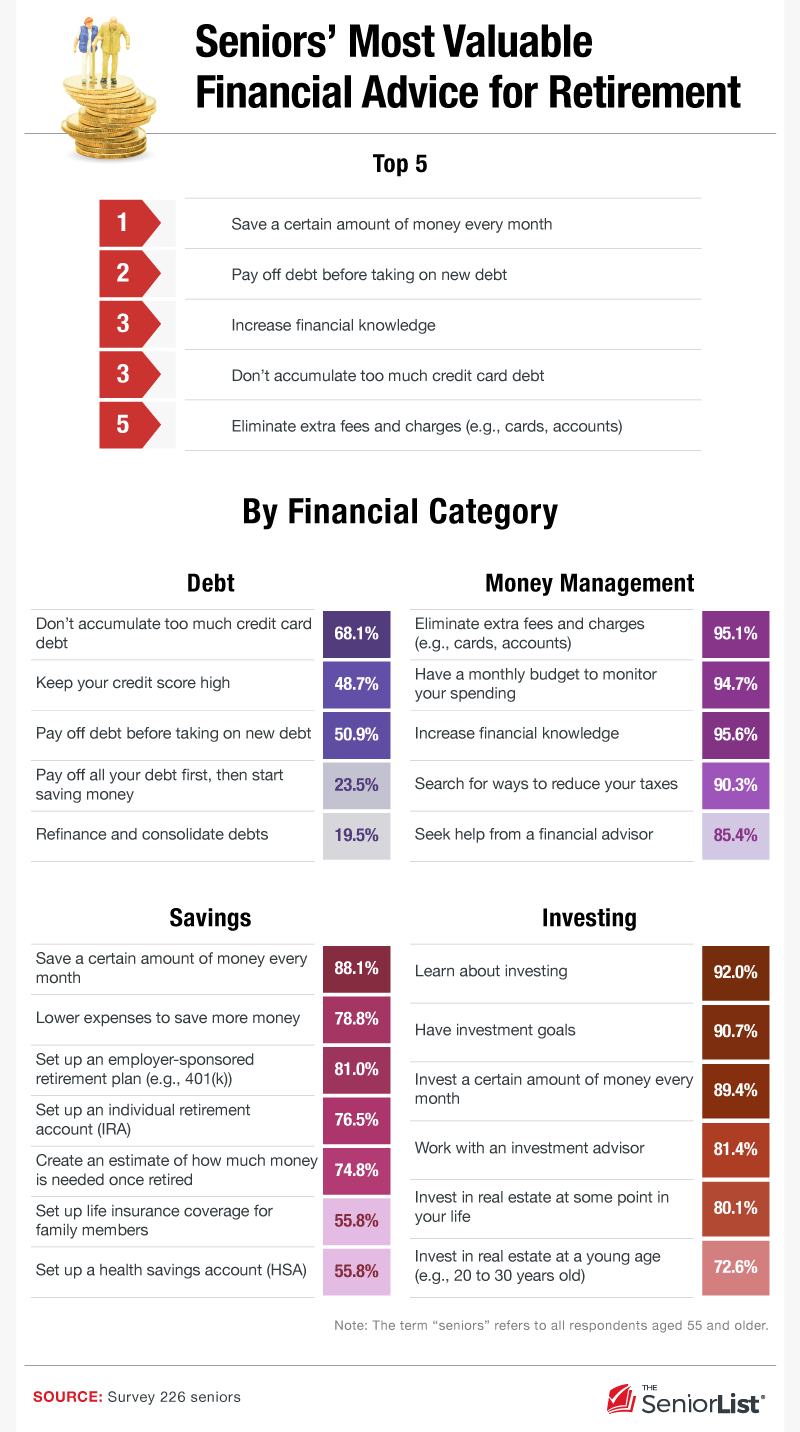 One thing millennials do know is what it’s like to live with overwhelming debt. The current reality is that more than 44 million Americans have student loans, while the average millennial owes around $42,000. About 68 percent of seniors recommended that young people don’t accumulate too much credit card debt, while nearly 49 percent suggested individuals keep their credit score high.

At the same time, almost 51 percent suggested paying off old debts before accumulating new ones, although that is very often impossible for the average college graduate mired by student loans. Another 23.5 percent of seniors suggested saving after paying off debt, but that, again, is a difficult framework for many millennial postgraduates.

The top advice for money management was to eliminate extra fees and charges on things like credit cards and bank accounts. For savings, 88 percent of seniors recommended saving a certain amount of money every month. They also advised others to lower their expenses to save more money, learn about investing, and have investment goals.

Although senior households, on average, have more savings and experience with money management, there’s plenty one might wish they’d known in hindsight. 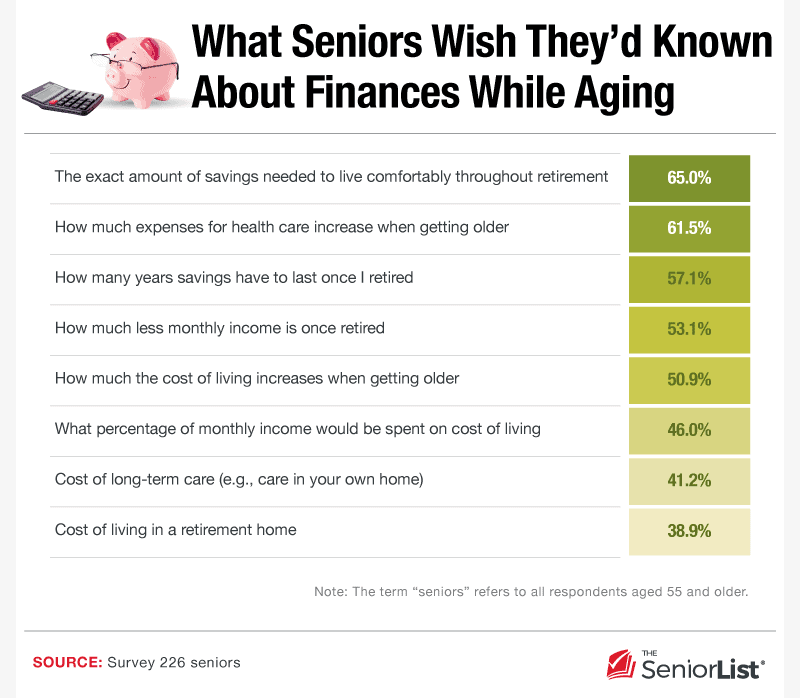 Sixty-five percent of seniors said they wish they’d known the exact amount of savings they needed to live comfortably throughout retirement. Likewise, 57 percent said they would’ve preferred to know how many years their savings would have to last during retirement, and another 61.5 percent said knowing how much expenses for health care increases when one gets older would’ve proved helpful.

Our older years, including retirement, are still quite expensive: The average household run by someone aged 65 or older spends around $45,756 each year (or $3,800 monthly). Although that’s less than the average younger household, it’s a staggering reminder that Americans should start saving for their twilight years. We surveyed senior citizens and millennials alike to see how Americans handle their money, plus where they learned about financial health. Our results suggest that the young and the old both think about money, the future, and how to better manage their finances.

We surveyed 226 seniors and 612 millennials about finances and preparing for retirement. The term “seniors” used in this project includes the following generations, as defined in our survey: silent generation, born 1925 to 1945, and baby boomers, born 1946 to 1964. Of the 226 seniors, 108 identified as men and 118 as women. Respondents in this group ranged in age from 55 to 81 with an average age of 61 and a standard deviation of 5.7. Sixty-one of the seniors in our survey were retired, and the others were employed full or part time. Forty-seven of the 226 seniors reported being retired.

Do you want to educate your friends and family about our findings on generational differences in finances and savings? The graphics and information found on this website are available for noncommercial reuse. Feel free to share them as much as you’d like across the web and on social media, but please make sure to link back to this page. Thank you!