Having a Life Crisis

Anxiety, panic, insecurity, and feeling absolutely lost in life – you’ve hit a turning point, and instead of the clarity everyone said you would have at this age, your life has lost direction. Most people think they have half their life to live before reaching this stage, but it may be more like a quarter. While midlife crises are still alive and well, your elders may have underestimated societal changes when they said your 20s and 30s would be the “best years of your life.” Instead, financial struggles, educational regrets, and career confusion have caused those in their mid-20s to early 30s to undergo a new type of crisis, often referred to as a quarter-life crisis.

With just over two decades under their belts, what life events are triggering crises in millennials and how does the new stage of unease compare to the long-standing midlife crisis? We surveyed 995 Americans for their take on hectic life stages, their main crisis triggers, and how they cope with overwhelming feelings. Keep reading to see when life truly hits the hardest and what you can do to navigate through it.

Different life events can cause a fluctuation in emotions – it’s just a part of being human – and while some people experience points of intense struggles earlier than others, 91.1% of respondents said they had experienced a period in their life where they felt extreme self-doubt or fear that they had yet to fulfill their full potential, otherwise known as a life crisis. 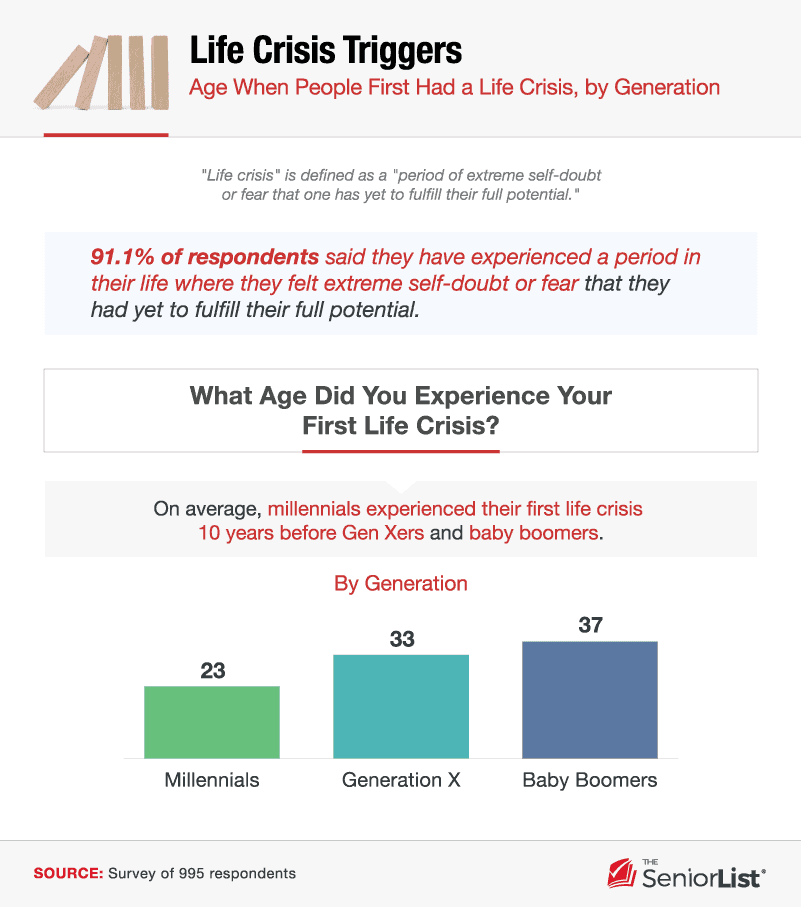 Baby boomers experienced their first crisis at age 37, but Gen Xers and millennials pointed to the ages of 33 and 23, respectively. Of course, boomers have lived longer than these other generations, therefore likely experiencing more of the ebbs and flows that life has to offer. With less life experiences behind them, it stands to reason that millennials who have endured their first life crisis did so an average of 10 years before Gen Xers and baby boomers.

Considering the difference in stressors and triggers each generation faces is vital to understanding the drastic differences in onset. The majority of people across all ages named finances as the biggest catalyst of their most significant crisis, followed by job-related stressors. Americans work more hours than any other country in the industrialized world while wages continue to fall behind the rising costs of living, so it’s no surprise that career and financial stress are overwhelming the majority of adults across all ages.

Breaking it down by generation revealed interesting findings: Millennials were significantly more likely to say mental health caused a spiral into a life crisis, while romantic relationships and physical health were the third most common triggers for Gen Xers and baby boomers, respectively. 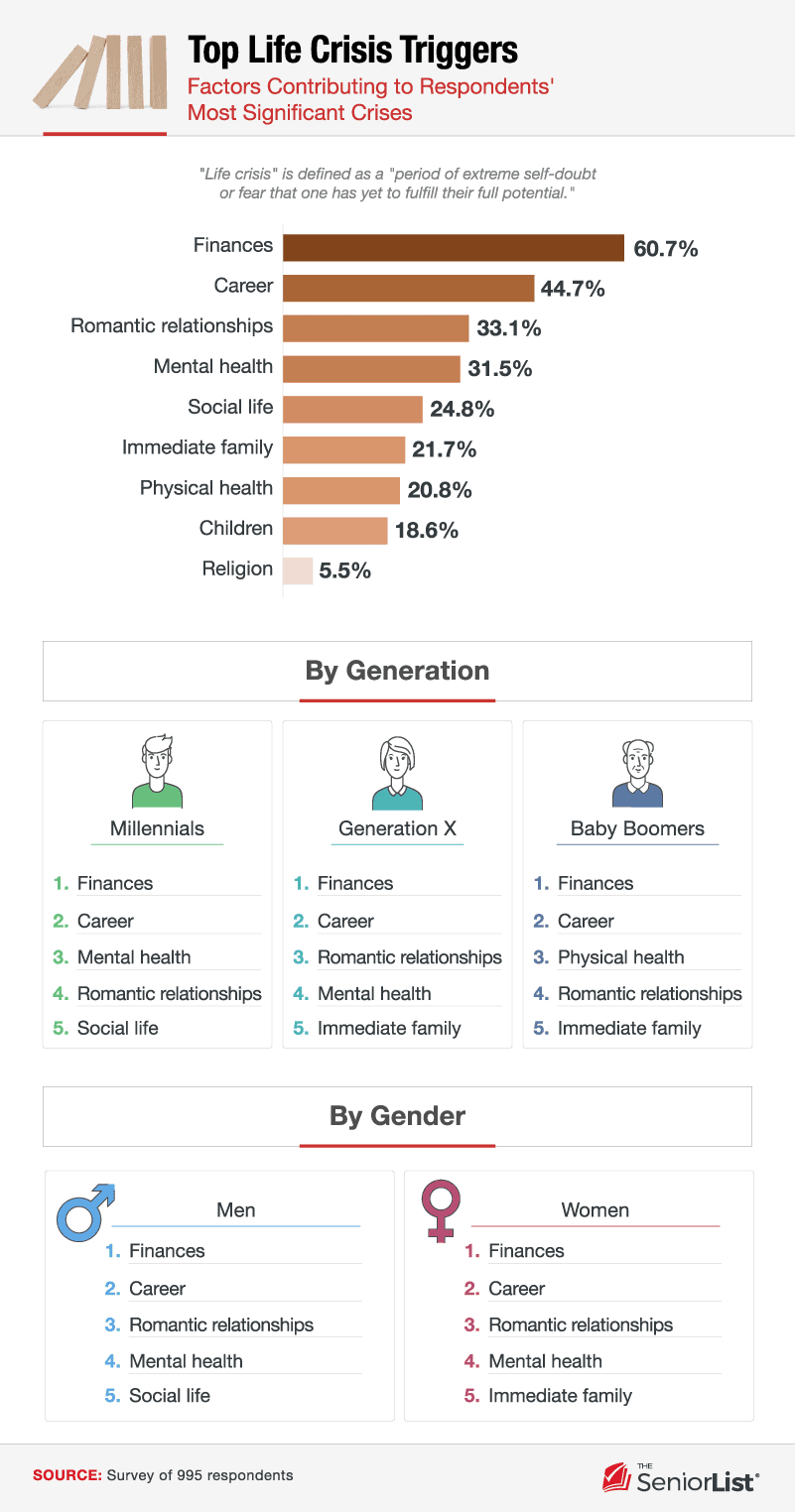 The youngest generation has brought a new wave of openness regarding mental health; however, the lack of stigma hasn’t prevented the generation from struggling. Young adults have higher rates of mental health issues and are less equipped to deal with them, likely leading to an increased risk of crises.

Resilience is not only lacking in young people struggling with mental health issues, though. Only 1 in 5 people felt they managed their stress well during a life crisis, with nearly 40% saying they managed poorly.

Struggles with finances are no longer only occurring well into one’s time in the workforce. As millennials become the majority of employees and fail to see a substantial amount in their bank account, finances have triggered their life crises at the prime age of 23. Gen Xers didn’t have financially triggered crises until they reached 33, while baby boomers didn’t experience one until their early 40s. 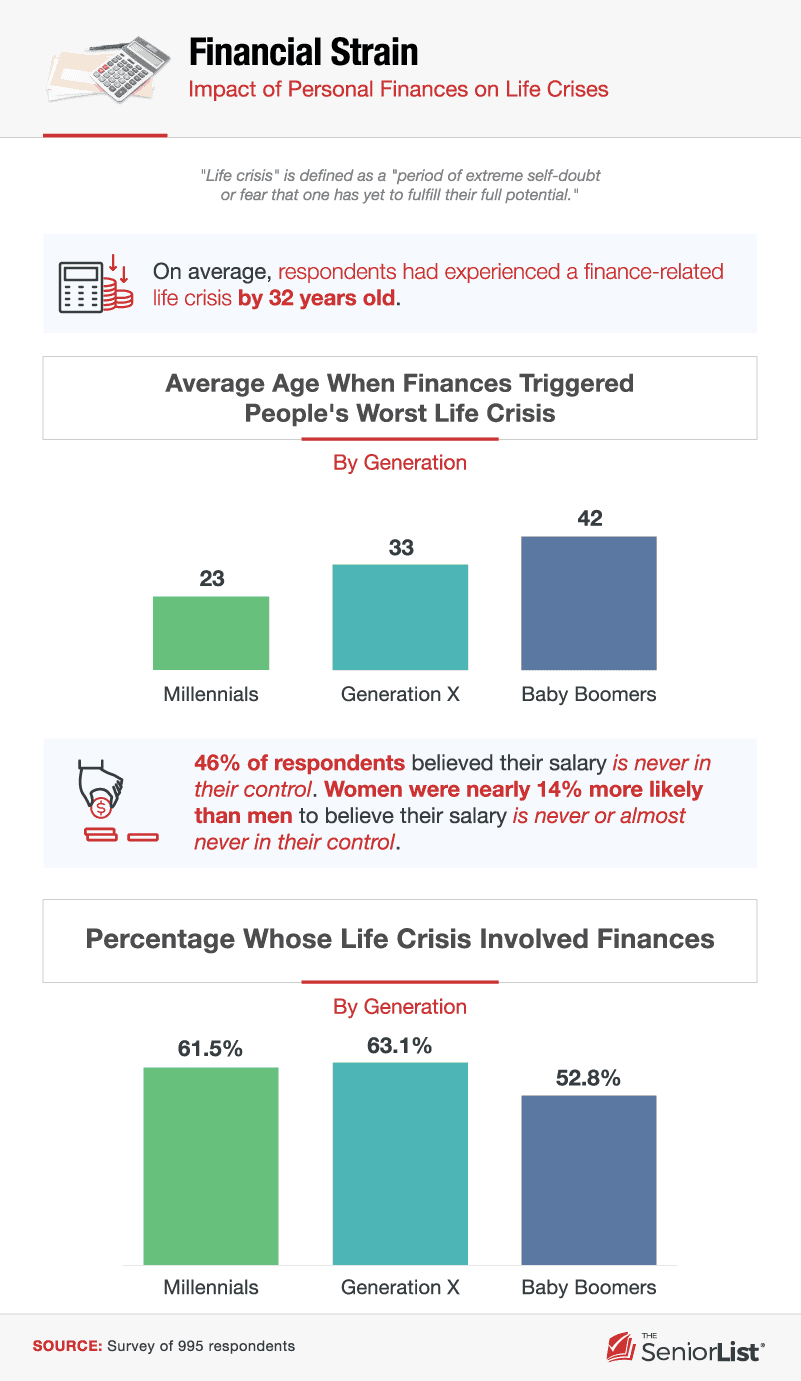 The feeling of unease surrounding finances often comes from a lack of control – 46% of respondents believed their salary is never in their control, and thanks to the gender gap, women were nearly 14% more likely than men to feel out of financial control. However, in terms of salary differences with age, baby boomers typically earn higher incomes than the younger generations, with Gen Xers also making more than millennials across nearly every state. Despite the higher income, Gen Xers were more likely than millennials to cite finances as the trigger of their most significant life crisis.

But the answer may lie in their spending. Compared to millennials, Gen Xers spend one-third more annually and have more than themselves to worry about: Roughly half of Gen Xers are also financially supporting both a parent and a child simultaneously, likely leading to a significant increase in financial stress.

The eight-hour workday has been standard for over a century, but all these years later, the 40-hour workweek is finally starting to change. Mass amounts of burnout and stress have made Americans sick and led to 75% of people experiencing a work-related life crisis. Again, millennials are experiencing these crises at a much younger age than their older counterparts, with 25 years old being the average age of onset. Baby boomers, on the other hand, experienced a work-triggered crisis at an average age of 38, while the average age for Gen Xers was 35.

It didn’t take long for millennials and Gen Xers to reach the level of crisis, either. Compared to nearly two years on the job before baby boomers went into crisis mode, Gen Xers and millennials were only working for 15 and 13 months, respectively. While the middle and youngest generations were closer in timing, millennials were significantly more likely to be currently experiencing a work-related life crisis. However, the impact of work on millennials is leading to a reciprocal change – young adults are unhappy with the current nature of work and are now shaking up the labor force. By demanding remote work options, standing up for transparency, and focusing more on work-life balance, millennials are actively fighting against the work-related crises their generation is so heavily facing.

No matter how hard people try, stresses from the outside world often seep into relationships. External stressors, whether it be from finances, work, or something else altogether, have a way of coming between two people and, sometimes, demolishing relationships. But regardless of external or internal stressors, 1 in 3 respondents stated that their romantic relationships triggered a life crisis. 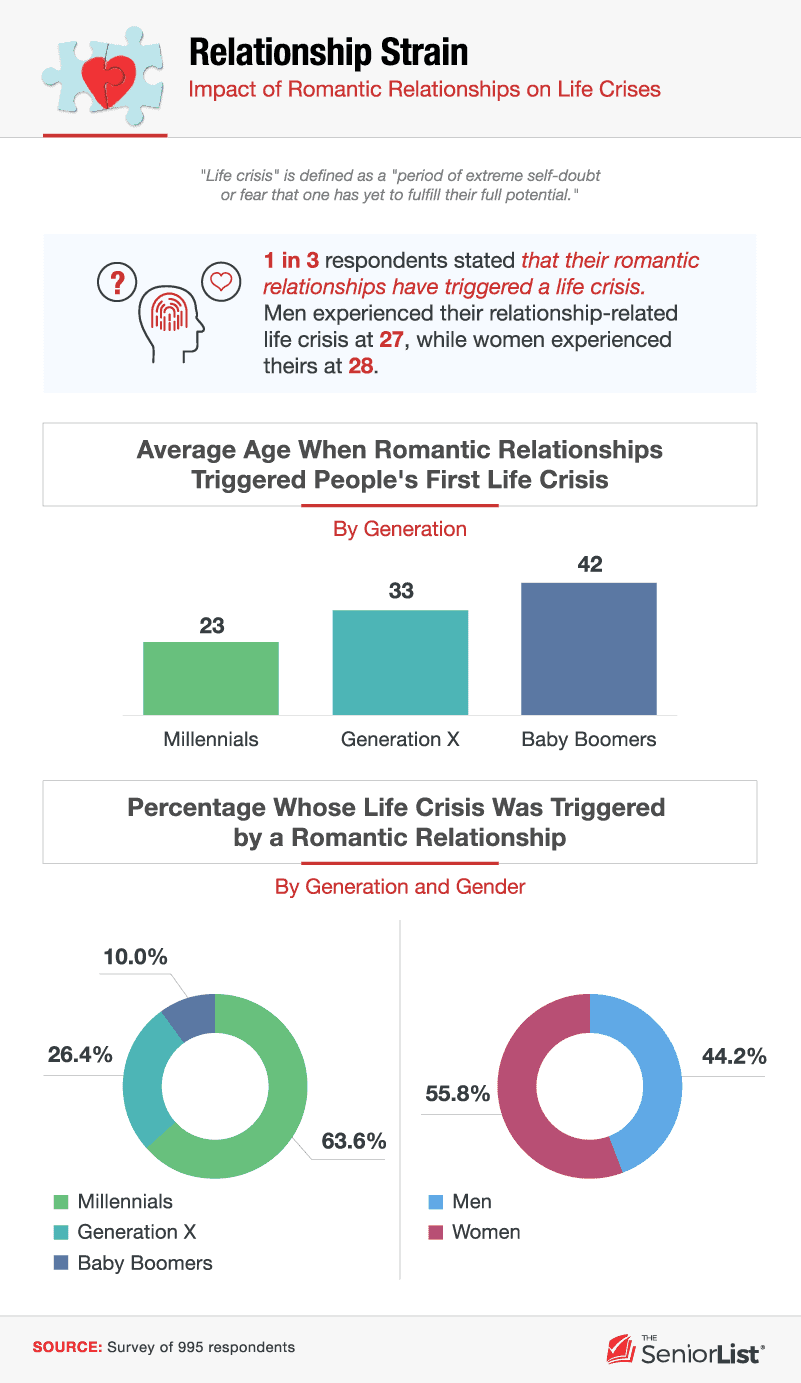 Trouble in the dating world for young adults is likely to blame for the overwhelming majority of millennials who have previously suffered a relationship-triggered life crisis, but women were also more likely than men to report romantic roots for their most significant crisis. Nevertheless, both genders ranked romantic relationships within the top five life crisis triggers.

Worst Has Yet to Come

Talking about the most significant crisis in one’s life can be difficult if they haven’t lived long enough to experience at least a few, so we turned to baby boomers to find out which life crisis was the worst. 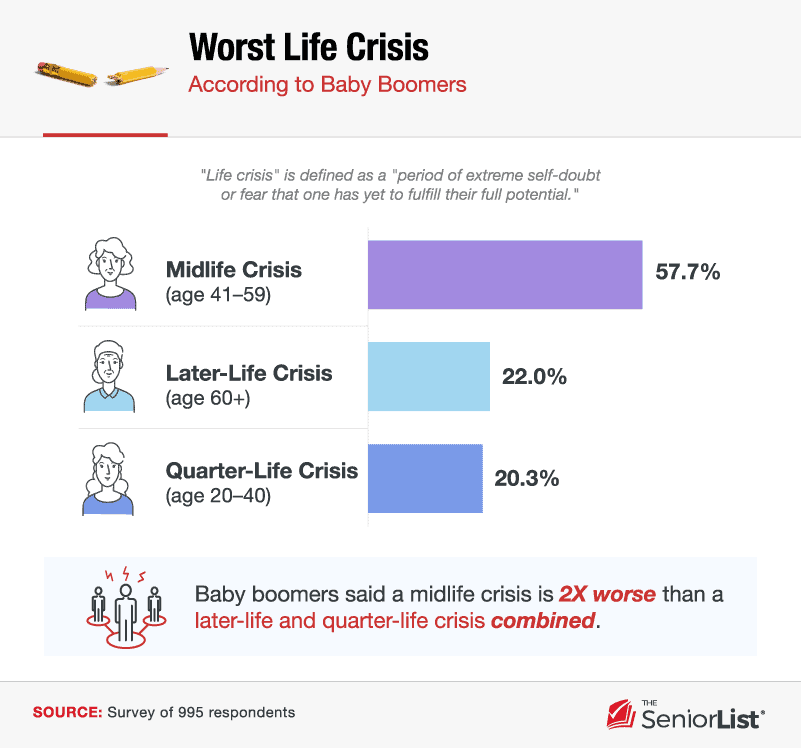 Negative emotions are never easy to deal with, and when the feelings of uncertainty, helplessness, and lack of control settle in, it can be even more difficult to manage. But regardless of whether the feelings stem from a life crisis or just normal life stressors, the majority of Americans struggle to cope with adversity. Nearly 40% of respondents said they were moderately confident in coping with adversity over the past month, while only 6.3% felt extremely confident. 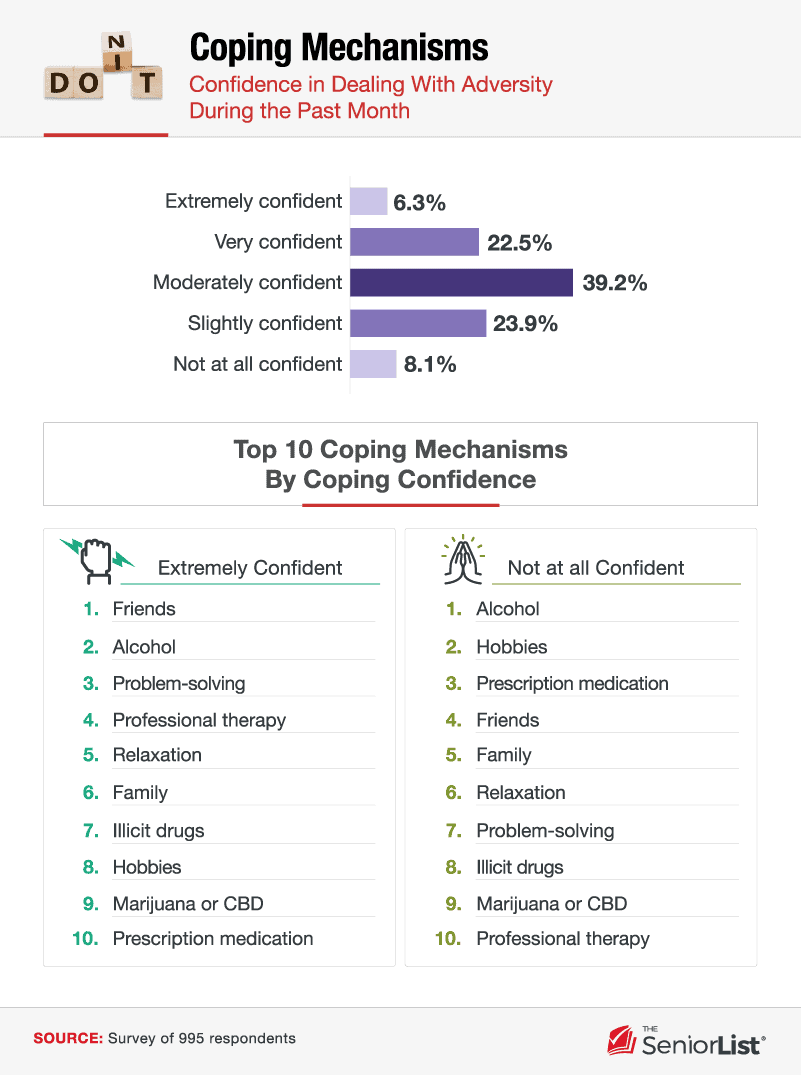 Those reporting extreme confidence in their ability to cope with adversity heavily relied on friends to get through tough times. While alcohol still ranked high on their top coping mechanisms, problem-solving, professional therapy, and relaxation also made it to the top five. On the other hand, those who said they lack confidence in their coping skills used alcohol to cope more than any other mechanism – an unhealthy tactic that can exacerbate their issues with stress. Prescribed medications were also a popular coping mechanism for those without confidence, even more so than friends and family.

Growing up, most people think they have a good 50 years before they’re faced with an identity or life crisis. But as work stress increases, finances decrease, and relationships become more difficult, crises are hitting earlier and earlier. Quarter-life crises affected millennials the most, though baby boomers claimed these youngsters have yet to see the worst of it. Regardless of the stage in life, learning how to manage stress and adversity in a safe and healthy way can make a significant difference in the lasting effects of a quarter-, mid-, or later-life crisis.

Data were gathered through a survey answered by 995 respondents. The respondents who were excluded missed the attention-check question or indicated they had never experienced a life crisis (a period in life where one felt extreme self-doubt or fear that they had yet to fulfill their full potential). Throughout the survey, any outliers were excluded from our data. From the able respondents, 44% were men and 56% were women. 60.14% were millennials, 24.88% were Generation X, and 12.29% were baby boomers. Our respondents ranged in age from 18 to 77 with a mean of 34 and a standard deviation of 12.08.

The data we are presenting are self-reported. There are many issues with self-reported data. These issues include but are not limited to selective memory, telescoping, and exaggeration. As a result, the outliers in this study have been excluded.

Life crises can leave you feeling lost and uncertain, but nobody should ever go through it alone. If you want to help spread awareness by sharing this project, the graphics and content found here are available for noncommercial reuse. Just don’t forget to link back to this page to give the authors proper credit.