Data from more than 2,000 seniors in March, April, and July

As stay-home and quarantine orders spread across the U.S. this March, so too did fears that reduced contact with friends, loved ones, and even strangers would result in a mental health crisis brought about by social isolation.

At least one major study in June indicated that those concerns largely haven’t materialized with the broader public, with an American Psychological Association-backed analysis finding no significant increase in the percentage of Americans who say they feel lonely or isolated.

However, the report doesn’t focus exclusively on seniors and notes that older adults were the only group to show increased loneliness. It further states that people with chronic conditions or people that live alone are more prone to loneliness.

Beginning in mid-March, we’ve conducted multiple surveys of American adults 65 and older, totaling more than 2,000 responses, initially to discern whether they were prepared for lengthy quarantine periods and later to find out how their interactions with others have changed and if they are feeling a stronger sense of loneliness.

You can see the results of previous study periods here and here, but our latest survey has revealed that most seniors were feeling more lonely in late July than they were in mid-March. In addition, for a small-but-worrying percentage of older adults, extreme feelings of loneliness are on the rise.

Read on to check out our full study, but take a look at the key findings:

When our surveys began in March, the COVID-19 pandemic was still in its early stages here in the U.S. Health officials were recommending people practice aggressive hygiene and avoid large groups, but no states had yet issued sweeping stay-at-home orders, which would eventually become commonplace in most states.

As a result, our first survey period found that almost all seniors said the pandemic had not resulted in any changes to their feelings of loneliness. But by the next month, the share of seniors who said they weren’t feeling any different had declined by about one-third, while four times more seniors said they were more lonely.

Notably, we did not find significant differences in these rates between our second and third studies, perhaps due to the nation settling into a new normal, or possibly as a result of many states relaxing restrictions on people’s ability to move freely.

With infection rates back on the rise in many states today and the possibility of a second wave on the horizon that could throw many areas of the country back into quarantine, it’s unlikely our next survey period will show no movement in seniors’ overall feelings of loneliness.

While overall our latest study showed that seniors grew much more likely to report an increase of loneliness, women were far more likely than men to say the pandemic had made them feel more lonely. The gap was at its widest in our second study when 47 percent of women said they were feeling more lonely compared to 29 percent of men.

Both groups have seen their loneliness rates rise, but the increase has been steeper for men than for women. Between our first and latest study, the share of women reporting that they feel more lonely rose by 277 percent, while the corresponding rate for men climbed by 329 percent.

As with overall feelings of loneliness among all seniors, those have stabilized for both men or women.

In addition to asking seniors generally whether they had been feeling more lonely as a result of the pandemic, we asked them to quantify exactly how lonely they would say they are.

Respondents provided a number, on a scale of 0-100, and while the majority of seniors don’t report their loneliness as being concerningly high today, feelings of extreme loneliness have risen since March.

Fast forward to today, only 50 percent of seniors gave their loneliness a low rating, and five percent said they were extremely lonely, giving their feelings of loneliness an 80 or higher. That’s an increase of nearly 80 percent in feelings of extreme loneliness.

Most predictions of the impact of the pandemic on Americans’ feelings of loneliness and isolation stemmed from the need to limit contact with people outside of our households to reduce the risk of transmitting the virus from person to person.

Our survey found that in-person contact plummeted during the spring but has bounced back over the summer. About 37 percent of seniors said they had in-person interaction with people outside their household several times per day in the beginning. This figure fell to just under 12 percent in our second study, but our latest survey found that more than 22 percent of seniors said they were interacting in-person with non-household members many times every day. That’s an increase of 92 percent between our latest surveys.

Other contact frequency rates indicate that most seniors were aggressive with their social distancing practices in the spring but have either relaxed those practices. A Gallup poll in mid-July found that about 47 percent of Americans 55 and older always wear a mask when out in public, which is quite concerning given that seniors account for an outsized percentage of COVID-19 deaths and cases.

Safer forms of contact with others, including video chat and other online interaction methods, are on the rise, though this type of communication was already relatively high for seniors. Still, seniors are more common to have online interactions with people outside their household multiple times per day, and they’re about half as likely to have little online contact with others. 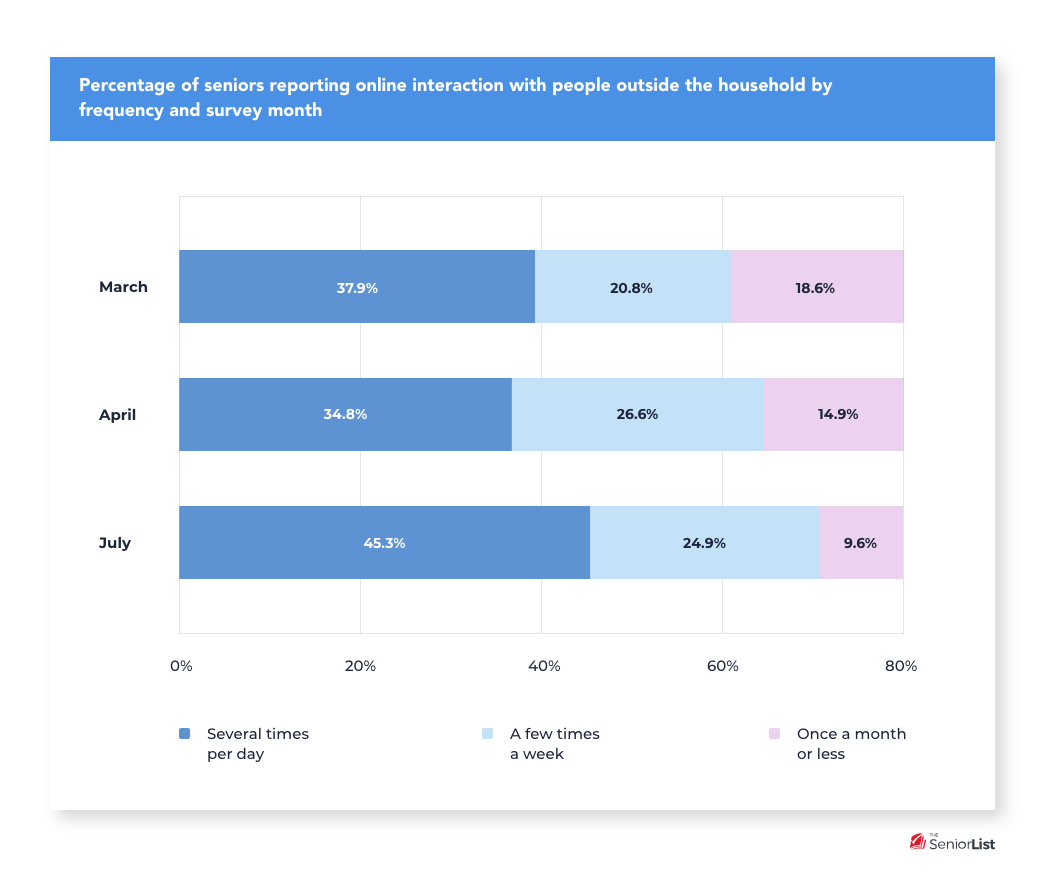 If there’s a silver lining in the COVID-19 crisis, it could be that seniors are becoming more
tech-savvy. During our first survey period, just over one in four seniors said they were using
video calls, which could include FaceTime, Zoom, or Facebook Messenger. This share rose during every survey period, and today more than half of seniors say they’re using video calling.

Because both rates have risen, it’s unclear the extent to which video chat or other forms of online communication can help battle loneliness.

Nearly 13 percent of seniors who said in our first survey that they were feeling more lonely reported that they communicated multiple times per week online with people outside their household. The rate nearly doubled between March and April and rose less dramatically through July.

Among seniors who reported that they were extremely lonely or those who rated their loneliness at an 80 or higher on a 0-100 scale, video calling has more than tripled, surging between March and April and rising more slowly over the late spring and summer.

A 2018 study by insurance giant Cigna found that almost half of American adults said they sometimes or always feel lonely. While it’s normal to feel lonely from time to time, a meta-analysis of scientific literature on the effects of social isolation and loneliness found that these feelings increased the chances of death by nearly 30 percent.

Add to that baseline risk from social isolation and loneliness general anxiety about an ongoing pandemic, and it’s no wonder that more seniors are feeling lonely as a result of the virus. So what can be done to ensure that extreme loneliness and social isolation don’t take hold while we all reduce our risk of contracting or transmitting COVID-19?

Here are a few tips for coping with isolation and loneliness during the pandemic:

Put it in writing: Send notes to friends and loved ones, in addition to regular contact over the phone or online. A UCLA study in 2007 found that the act of writing can heighten mindfulness and reduce stress and anxiety.

Get out (safely): Stepping outside, whether for a dog walk or stroll around the block, if it can be done safely (wear a mask if you can’t maintain social distance), can allow a worried mind to focus on nature. Seniors should be sure to wear proper sun protection when outdoors.

Make time for virtual hangouts: Spontaneous communication can lift the spirits, but the best way to ensure you’re regularly communicating with others is to put virtual hangouts on a calendar. Set days and times that work, and try to stick with the schedule as much as possible.

Give back: Science shows that helping others helps us, too. That’s because contributing to causes and helping others can stimulate the brain’s pleasure centers.

None of us knows when the COVID-19 crisis will be over, and with cases rising in many parts of the country, we may be not all far into the progression of this virus. But whether it’s over in a month or a year, it’s clear that getting physically sick is not the only risk, especially for seniors. While the good news is that loneliness among seniors is generally leveling off, more seniors are feeling lonely, and far too many are feeling extremely isolated.

In March, April and July, we surveyed more than 2,000 Americans 65 and older about how the pandemic had changed their behavior when it comes to interaction with others, as well as their use of technology like video chat and other online communication methods.