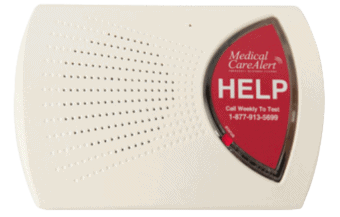 I have heard great things recently about a Michigan-based emergency-response system called Medical Care Alert. Out of professional and personal curiosity, I decided to test it out. I chose to review the company’s basic in-home system and mobile unit, which is perfect for active users.

I’ll recount my experience with Medical Care Alert below. I hope it will help you decide whether it’s the right fit for you or your loved ones.

After testing the Medical Care Alert system, I see why the caregiving experts in my circle are praising it. It checks almost all the boxes for product quality and service.

Medical Care Alert systems can be purchased either over the phone or on the company’s website. I used the website to purchase both my Home and Home and Away systems. I simply selected the additional devices I wanted, such as fall-detection pendants, entered my credit-card information, and waited for my systems to arrive.

My Home and Away system included:

FYI: If you pay for a Medical Care Alert system on an annual basis, then you’ll receive both free shipping and a free lockbox, which can help first responders enter your home in the event of an emergency.

Setting up my Home system was quick and easy. I plugged the base unit into an outlet, then plugged the unit into a phone jack and waited for a connection to be established. Once the system beeped, I knew it was ready to begin testing.

The Home and Away system was just as easy to set up. I placed the mobile unit on the charging cradle, plugged the cradle into the wall, and waited for the battery to fully charge. Once the charging light stopped flashing, the mobile system was ready for use.

To test my Home system, I walked around my house wearing the pendant and placing calls in different rooms. Each of my calls was answered promptly, and I could communicate clearly with response agents through the base unit’s loud speakerphone. With the system’s 1,000-foot range, I was able to make emergency calls from my porch. Since the system’s buttons are waterproof, I could even make calls from the shower without breaking the equipment. Fall detection also worked well. During a series of simulated falls (which are about as fun as they sound), my device automatically contacted Medical Care Alert’s response center. To cut down on false alarms, I could press my fall-detection pendant after a call was triggered to let them know it was erroneous.

Once the mobile unit was charged, I began testing the device. This involved dialing a phone number and following the prompts. Once the 15-minute test mode was on, I pressed the device’s help button. It beeped, so I knew it was in testing mode. I made test calls around the house, and each was answered quickly by an agent at the monitoring center.

To test the pendant’s waterproofing, I brought it onto my lawn and turned on the sprinklers. My calls still went off without a hitch. To check the efficiency of the pendant’s range, I took it with me to the local theater. Whenever the cellular range was good, the device delivered crisp, clear audio.

Something else to note is that Medical Care Alert’s mobile device is an all-in-one unit, which means I didn’t need to wear an extra pendant to make calls or have automatic fall detection.

This app came free with my Home and Away system, and it was very handy for keeping track of the device’s location via GPS. People listed as emergency contacts can download the app on Android and iOS devices. The app lets caregivers check the weather in the device’s location, as well as battery and signal strength. My husband received notifications each time I made a test call and when my system’s battery got low.

Medical Care Alert’s systems go for as low as $27.45 per month for the in-home landline system. This price, however, reflects the cost with an annual contract. A month-to-month contract costs $29.95 per month.

The Home and Away system costs $36.62 per month on an annual plan, and the month-to-month pricing is $39.95 per month. Fall detection costs an additional $10 per month, regardless of the system type.

Look no further than Medical Care Alert if you want a simple emergency system with a team of well-trained emergency-response operators. One huge advantage of Medical Care Alert is that it has an in-house monitoring center based in the United States with both English- and Spanish-speaking operators. It doesn’t offer many advanced features, but Medical Care Alert delivers a solid performance you can trust will protect you or your loved ones.

For more information about this year’s best devices, take a look at my picks for the best medical alert systems.

I wouldn’t recommend Medical Care Alert if you want: