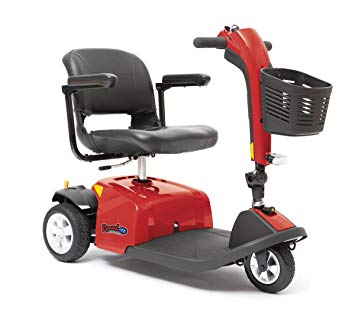 Are you sure Rascal is right for you?
See Our Favorite Scooters

For people with mobility issues, scooters like the Rascal brand offer many advantages. They operate by a rechargeable battery rather than the manual propulsion required of a standard wheelchair and reach speeds of about four miles per hour. They steer via an intuitive control rather than a small, confusing joystick. Many are able to be disassembled so that they can be transported by automobile and have a basket on the front so that you can easily carry your possessions with you.

For 35 years, the brand name “Rascal” was almost synonymous with mobility scooters. However, the company fell upon hard times in the early years of this decade. Lost contracts led to lost revenue, which prompted bankruptcy proceedings, and questionable business practices led to legal troubles that caused Rascal’s retailer, The SCOOTER Store, to shut down permanently in 2013.

For this reason, Rascal scooters are no longer widely available in the United States. Preowned models may still be available from retailers and outlets that deal specifically in used home medical equipment. A related company, Electric Mobility Euro Limited, is still in operation in the United Kingdom and continues to manufacture and distribute scooters and other mobility aids, but it does not appear that their products are available outside Europe.

Electric Mobility, the company that manufactured Rascal scooters, was founded in 1986. For decades, it was one of the leading companies in the mobility industry. At one point, the company even had a contract with the Department of Veterans Affairs to provide full-size four-wheeled scooters to disabled service members. The company initially rose to prominence in part by saturating television airwaves with commercials for products promising to give people with mobility issues the freedom to go anywhere, as well as restoration of the independence that many felt they had lost.

The aggressive advertising techniques used by the company included promotional sweepstakes offering the opportunity to win a free Rascal scooter. The contest was legitimate in that 300 participants did receive free scooters since the first sweepstakes were held in 1986. However, the company also used the sweepstakes entries to obtain phone numbers from contest entrants. The entry form prompted participants to include phone numbers on the form so that the company could contact them directly if they had won a scooter in the sweepstakes. What the form did not tell entrants was that Electric Mobility was collecting their phone numbers to use for telemarketing purposes.

Though ethically questionable, this practice of collecting phone numbers via sweepstakes entries was legal until 2003 when the national Do Not Call Registry went into effect. Consumers had the option of voluntarily listing their phone numbers on the registry, and once the numbers were registered, it became illegal for telemarketers to contact them at that number under the Federal Trade Commission’s Telemarketing Sales Rule.

There are some exceptions to the Telemarketing Sales Rule that allow a company to call customers whose phone numbers are listed on the Do Not Call Registry. If a company has an established business relationship with a consumer, it can continue to contact the consumer by phone for up to 18 months. However, the rules clearly state that merely obtaining a phone number from a consumer is not sufficient to establish a business relationship between the consumer and a company. Therefore, all telemarketing calls made by Electric Mobility to contest entrants since 2003, which numbered in the millions, were illegal.

Meanwhile, the aggressive advertising campaign used by Electric Mobility to market its products to seniors came under scrutiny from the U.S. Department of Justice, which filed a lawsuit against the company in 2005 for Medicare fraud. In 2007, that suit was settled for $4 million, but the settlement required periodic government reviews of the company. One such review in 2011 indicated that the company had received improper payments for scooters in estimated amounts ranging from $47 million to $88 million.

Perhaps due to Electric Mobility’s ongoing legal trouble with the government, the VA discontinued its contract with the company in 2011. The resulting loss of business revenue caused the company to file for Chapter 11 bankruptcy.

Around the same time that Electric Mobility filed for bankruptcy, the FTC started cracking down on the illegal telemarketing calls that the company had allegedly been making since 2003. A settlement between the FTC and Electric Mobility imposed a $100,000 penalty on the owner of the company, Michael Flowers. A $2 million penalty was to be imposed on the company itself, but due to an inability to pay, the FTC suspended it with the understanding that it would be due immediately if the Electric Mobility was found to have misrepresented its financial condition.

The company’s death blow came in 2013 when the Centers for Medicare and Medicaid Services informed Electric Mobility that it would no longer be able to receive federal reimbursement from the sale of its products due to continued allegations of Medicare fraud, causing the company to shut down for good.

Despite the demise of the parent company, there appears to be one retailer still selling one model of Rascal scooters in the United States today: Walgreens Pharmacy. It is unclear how or when Walgreens acquired its stock of this product, but it advertises a four-wheel Mega Motion Rascal scooter available for sale through its website. They are not available in Walgreens stores.

Otherwise, companies that sell used home medical equipment sometimes advertise Rascal scooters for sale. A search at the time of this writing discovered results for preowned Rascal scooters through third-party sellers on eBay and Amazon.

The following table indicates pricing for Rascal scooters available for sale online. Data may be subject to change.

It may be possible for a consumer to find a good deal on a preowned Rascal scooter. However, if you’re thinking about trying to find one, you should keep in mind that, since the manufacturer is no longer in business, you are unlikely to receive any warranties or other consumer protections unless the seller offers them.