Whether they’re a trained professional being paid to visit a client’s home so they can dispense medication and help them with physical therapy or they’re a family member driving an elderly loved one to a doctor’s appointment, an estimated 43 million Americans take on the task of “caregivers” for an increasingly aging population.

This report explores the services that caregivers provide and the safety and function of seniors’ homes from the perspective of caregivers. In this report, we’re looking specifically at care provided to adults age 70 and higher.

Nearly 60 percent of caregivers believe that seniors’ homes should be safer. If caregivers’ recommendations were followed when it comes to safety and medical devices, spending on those new devices alone would surpass $150 billion.

Who Is Receiving Care & What Are Their Needs?

According to U.S. Census data, there are more than 35 million Americans who are 70 or older, and those between 70 and 80 account for the largest share of this group, roughly 60 percent.

Though the ratios are slightly different, those between 70 and 80 also account for the lion’s share of those receiving care, with folks in the 90-and-up bracket being the smallest group among seniors receiving care (51 percent vs. 12 percent).

The most common task for which seniors required help was in shopping, as 75 percent of caregivers in our study said they helped an older adult with going to the market, while less than one in three said they helped a person with using the toilet. 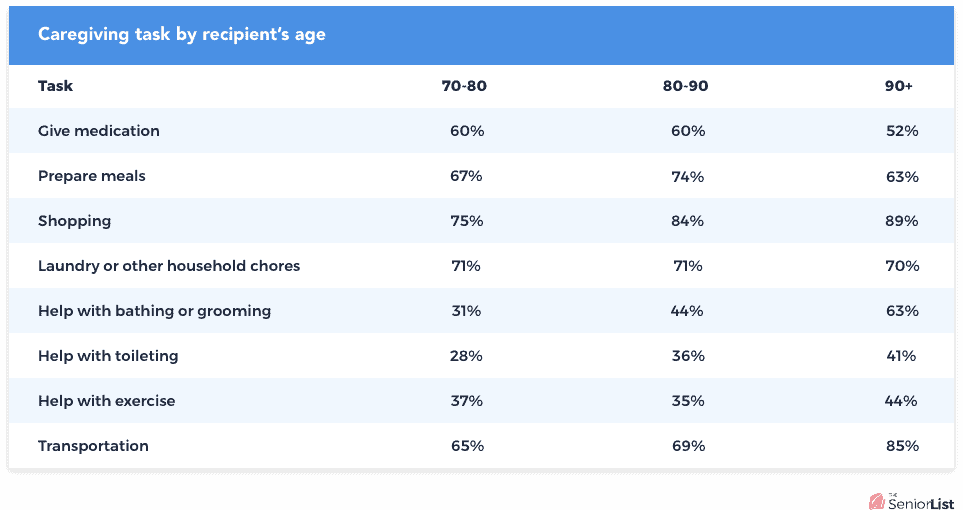 How & Where Is Care Provided?

No single living situation accounted for the majority of responses, but 43 percent of caregivers said they were providing care for an senior who lived with them in the caregiver’s home, while 33 percent of older adults receiving care lived alone in their own apartment. Only 8 percent live in a senior housing community, and about 16 percent were living in a home or apartment with family members or roommates.

Older adults living with their caregivers were the group most likely to receive every type of care we asked about, while those living in senior housing or retirement communities generally were the least likely, which is due largely to proximity. 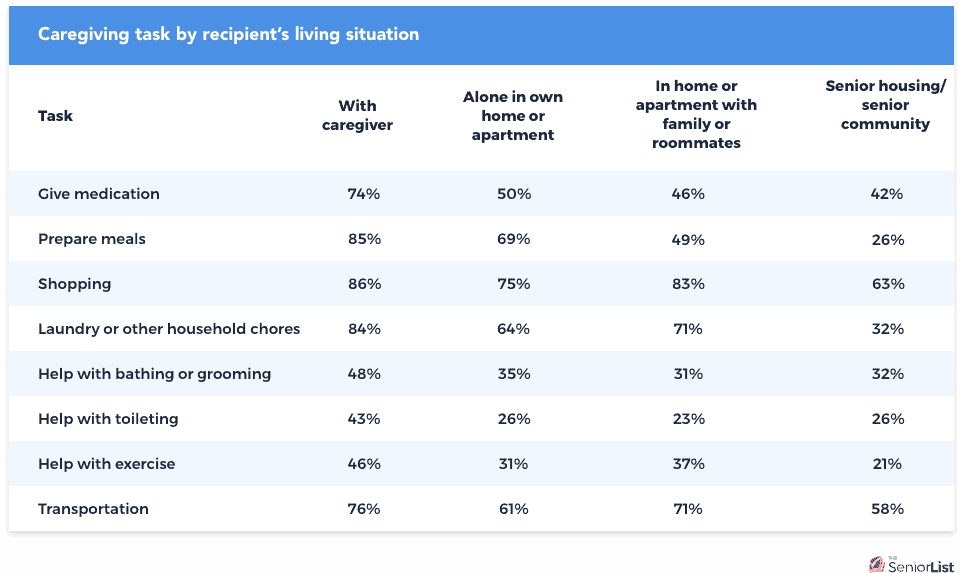 Nearly than half of caregivers in our survey provide care daily. There weren’t significant frequency differences when it comes to the recipient’s age. 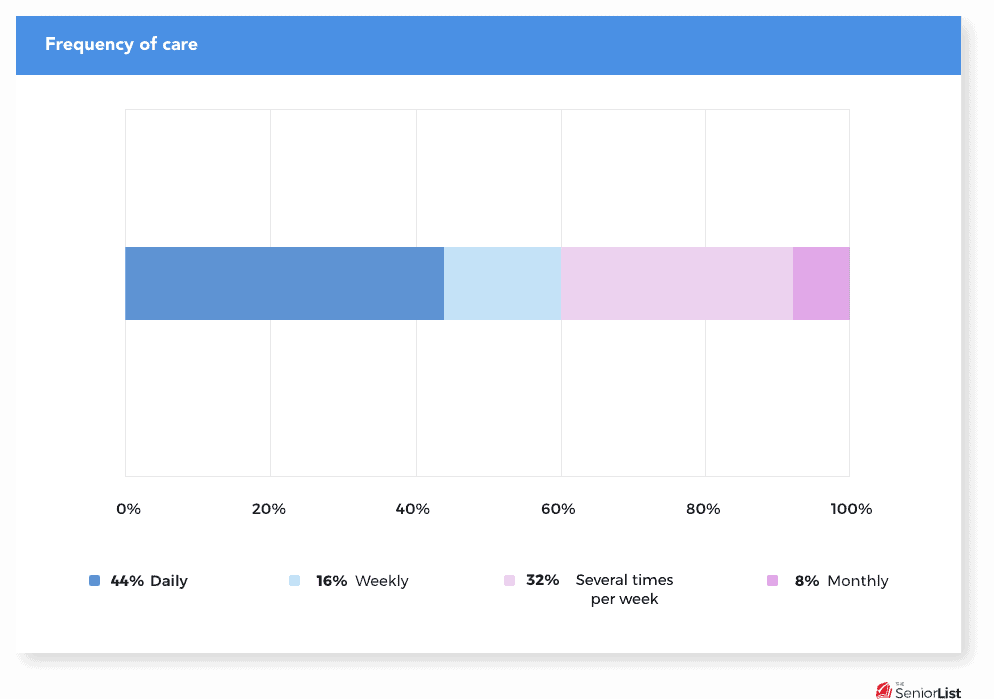 How Can We Make Seniors’ Homes Safer?

Seniors at are high-risk of falling and related accidents at home. According to the National Council on Aging, every 11 seconds an older adult is treated in an emergency room by a fall and leads to more than 45,000 deaths each year. We asked caregivers if the seniors home where they provide care should be made safer, 60 percent said yes.

Medical safety products, from walk-in tubs to medical alert devices, are intended to reduce injury or quicken response from emergency services. We asked caregivers which products that seniors currently used. 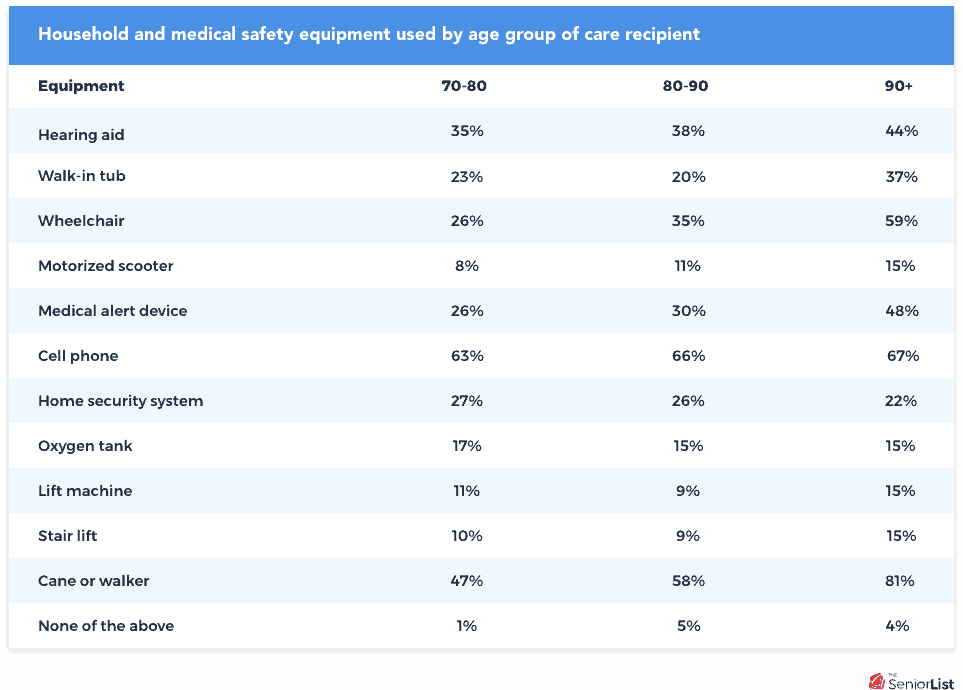 We then asked for recommendations from caregivers to increase the safety of the senior they care for. The most commonly cited products caregivers said would make older adults safer were walk-in tubs, medical alert devices and hearing aids. 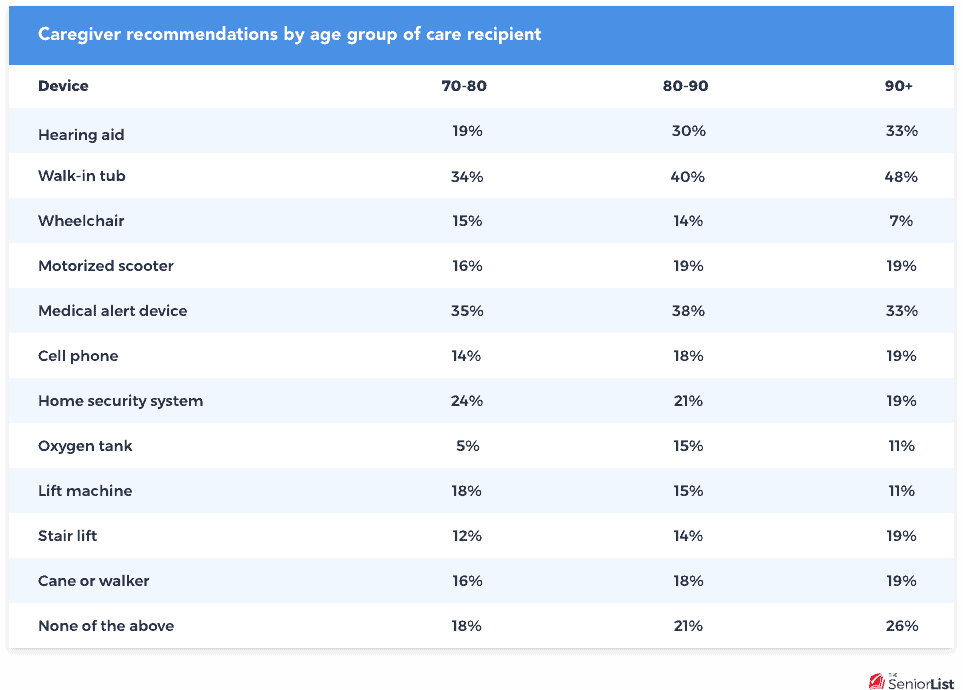 If caregivers’ recommendations were followed, more than $150 billion would be spent on safety equipment for older adults, though in many cases, devices’ costs are partially or completely covered by Medicare or private insurance. 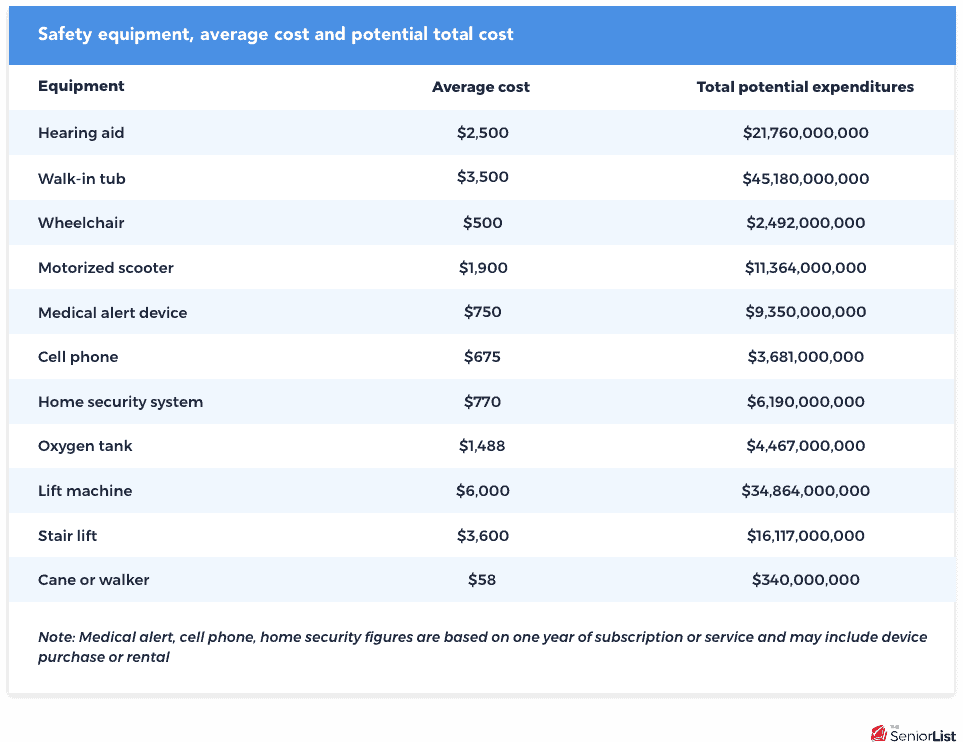 With the adult population expected to double between now and 2060, significant investments in safety products will need to be made in order to reduce injuries to seniors and to make the jobs of caregivers easier. While Medicare or insurance will cover some costs, policies need to be evaluated to increase the use of available senior care equipment, products and services.

The Senior List’s research team actively studies aging in place. We publish independent content covering social, economic, political and geographic topics for seniors. Data from this report comes from the Family Caregiver Alliance, National Council on Aging, U.S. Census Bureau and survey data from more than 500 adults that provide care to an adult age 70 or over. Other data sources have been linked in the text, with the exception of the average cost of safety and medical devices. Those sources can be found below: