What Do
Older Americans
Want To Be Called? New study shows traditional terms like “senior” are on the way out in favor of more modern, inclusive labels

From politics to the pandemic, older Americans are at the forefront of some of our most pressing issues, labeled by the media in ways that range from traditional (“senior citizens”) to respectful (“mature adults”) to snide (“OK, Boomer!”). We felt it was important to determine how the group itself would like to be described, and surveyed 600+ people aged 55+ to find out.

We learned that older adults primarily want to be recognized as integral parts of society rather than as burdening outsiders, and also that individual preferences varied.

Overall, our conclusions are nuanced, but several points are apparent:

In the search for a favorite descriptor, we asked older Americans which of eight widely-used labels they most preferred, and results varied dramatically.

No term garnered more than 1/5th of the votes, with “mature adults” and “older adults” narrowly ahead of “seniors” and “retirees”, followed by “senior citizens”. “Other” and “none” combined for significant numbers, outpacing declining terms like “elders”, “the elderly” , and “golden agers”. 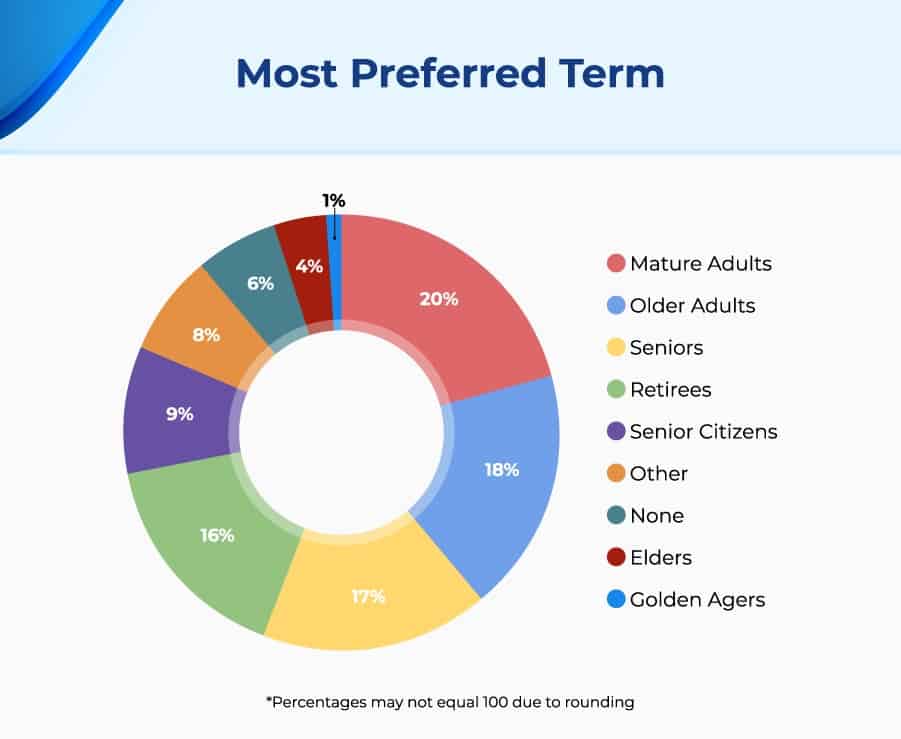 The lack of a standout isn’t particularly surprising, as that choice can be deeply personal; some seniors embrace growing older, others resist mortality, while the very definition of “old” is a matter of perspective. Since aging is inevitable, perhaps some people feel boxed in or trapped by a label of any kind.

This diversity of preferences was interesting, if less-than-enlightening. Fortunately, further insight came when we asked for elaboration.

When we asked for specific feelings about each term, trends became clear as approval rose above 60% for several labels: 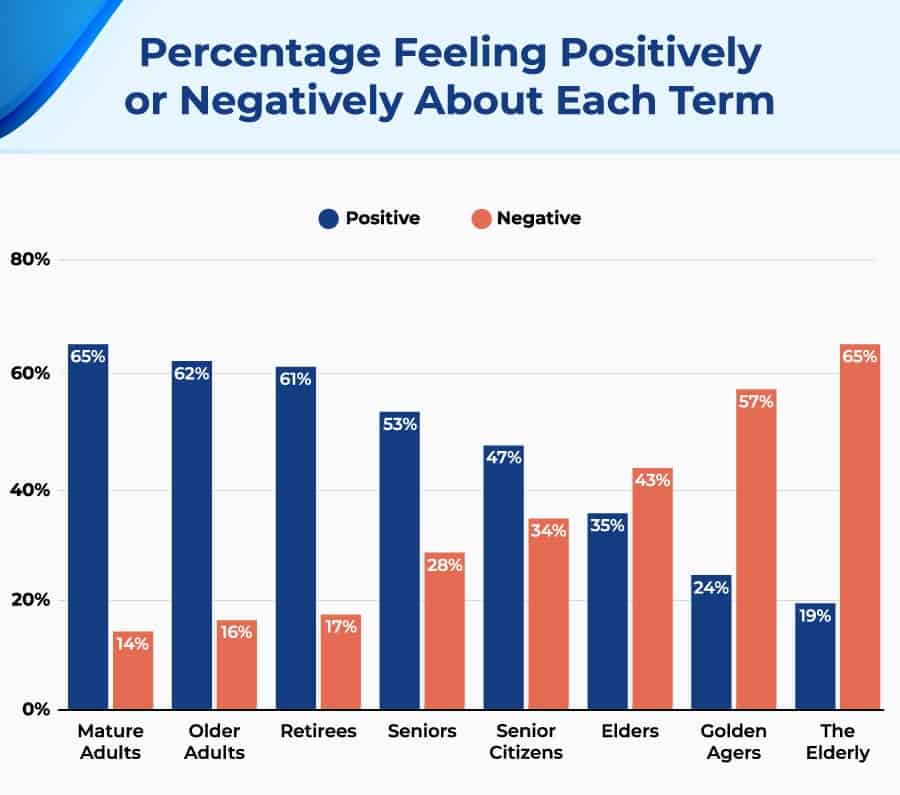 These preferences grew clearer when we grouped titles along those lines: 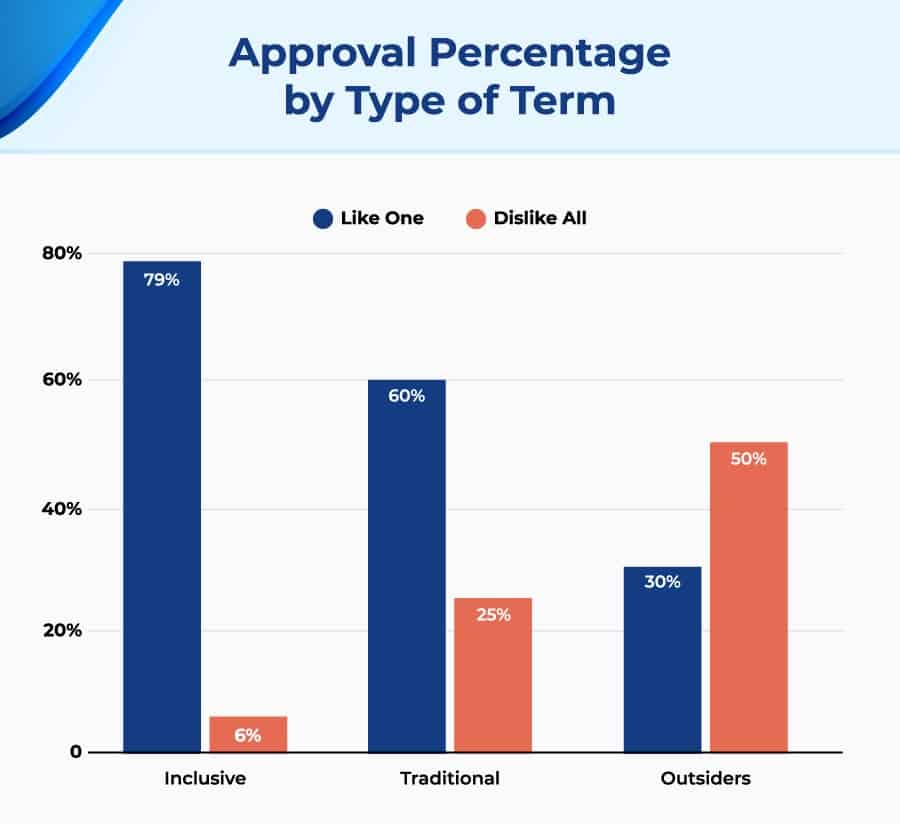 These results show that Americans prefer inclusive labels which place seniors within adult society rather than a separate class. That sentiment was further reinforced by the 7% of “other” replies, where preferences most commonly featured some version of “people”, “human”, or “adult”.

Older adults are still tolerant of traditional labels like “senior”, but those labels also saw much higher disapproval ratings. Coined during the New Deal to identify benefit recipients aged 65 and older (when life expectancy was that same age), these “senior” terms still carry the stigma of charity and feel out-of-touch in a world where we live nearly 80 years, and most Americans consider 65 “middle-age”.

Further breaking down our answers by age, it’s likely that these perceptions will be even more prevalent going forward.

Older adults are not a monolith; those in their fifties don’t necessarily favor the same language as those in their eighties, which becomes apparent when dissecting the data along age lines.

Many opinions were consistent across age groups, especially the universal intolerance of least popular names (“the elderly”, ”elderly”, and “golden agers”). A comparison of these emerging terms versus traditional titles, however, revealed different preferences by decade. 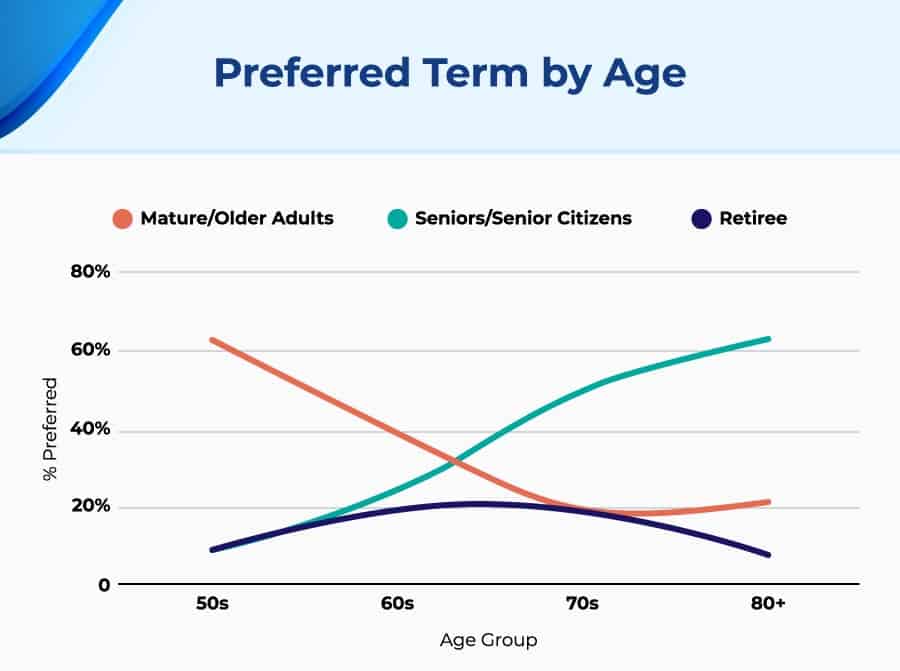 63% of respondents in their fifties chose inclusive references as their favorite, and had little love for traditional “senior” labels (9%). Opinions over age 80 were inverted, and senior titles (63%) bested the inclusive options (21%).

This might only suggest that we become more comfortable with “senior” titles as we grow older, but popular usage reflects the same shifting dynamic.

According to databases like Corpus of Contemporary American English and Google’s Ngram Viewer, which analyze word counts across published sources, the use of “senior citizen” has steadily declined since 1980, while “older adult” has consistently climbed in recent decades and looks to continue on that path.

Meanwhile, support for the lifestyle term “retiree” followed a classic bell curve, peaking around traditional retirement age, with less support among those too young to consider it or long past the age where it was relevant.

Then again, societal forces may soon divorce this term from age entirely.

Older Americans now live longer, work longer, and have expanded employment opportunities thanks to remote technology. Tech moguls retire at 35 as grandparents reenter the workforce, blurring lines so much that AARP dropped “retired” from its acronym…perhaps an indication of future use.

Heightened social awareness has ingrained the importance of seeing individuals as more than their gender/race/sexuality, and these results suggest it’s time to take the same approach to seniority. The poll provided no clear-cut choice for favorite title, but clearly showed how seniors wish to be perceived: as people who happened to have lived a long time, not a separate segment of society.

This survey provides an interesting snapshot documenting a moment in time, and since language and longevity are both moving targets, stay tuned for how they continue to evolve.