Which States Have the Best & Worst Nursing Homes?

The number of Americans residing in nursing care facilities has surged over the past half-century, rising more than 200-fold since the 1960s and nearly doubling in just the past 20 years.

As the U.S. population continues to grow older, it seems likely that more and more of us will require the care offered by nursing facilities in our later years because we need the kind of constant, skilled care such facilities offer.

Whether you’re considering nursing care for yourself in your later years or are weighing the options for a parent or other loved one, quality of care is always the single biggest concern. None of us want to send our parents or grandparents (or ourselves) to a nursing home where the level of care afforded to residents is substandard or even dangerous.

The federal government, specifically the Centers for Medicare & Medicaid Services (CMS), conducts regular analysis and monitoring of conditions in licensed nursing facilities across the country. Despite this, reports of abuses that weren’t caught by CMS in its oversight capacity are far from rare. In fact, the U.S. Government Accountability Office, a federal agency, recently called on CMS to beef up its efforts at ensuring nursing facilities comply with regulations after abuses at nursing homes in Oregon went unreported for 15 years.

While CMS may be called into question for gaps in reporting, the truth agencies nationwide investigate tens of thousands of complaints and other reports every year. In fact, the CMS database lists more than 120,000 inspections.

Did You Know: Nursing home costs can be some of the steepest among care facilities. To learn about your options for funding this type of care, read my guide to paying for nursing homes.

A closer look at those inspections reveals huge regional differences in the number of incidents at each facility, which types of reports are most common and how CMS has penalized facilities for breaking the rules.

For instance, the most populous state, California, has just under 1,200 licensed nursing care facilities, and more than 14,000 deficiencies were reported at California facilities. Many other high-population states follow California, including Texas, Ohio and Illinois.

There are more than 15,000 licensed nursing facilities in the U.S. With upwards of 121,000 deficiencies, that equates to just under 8 deficiencies per facility. 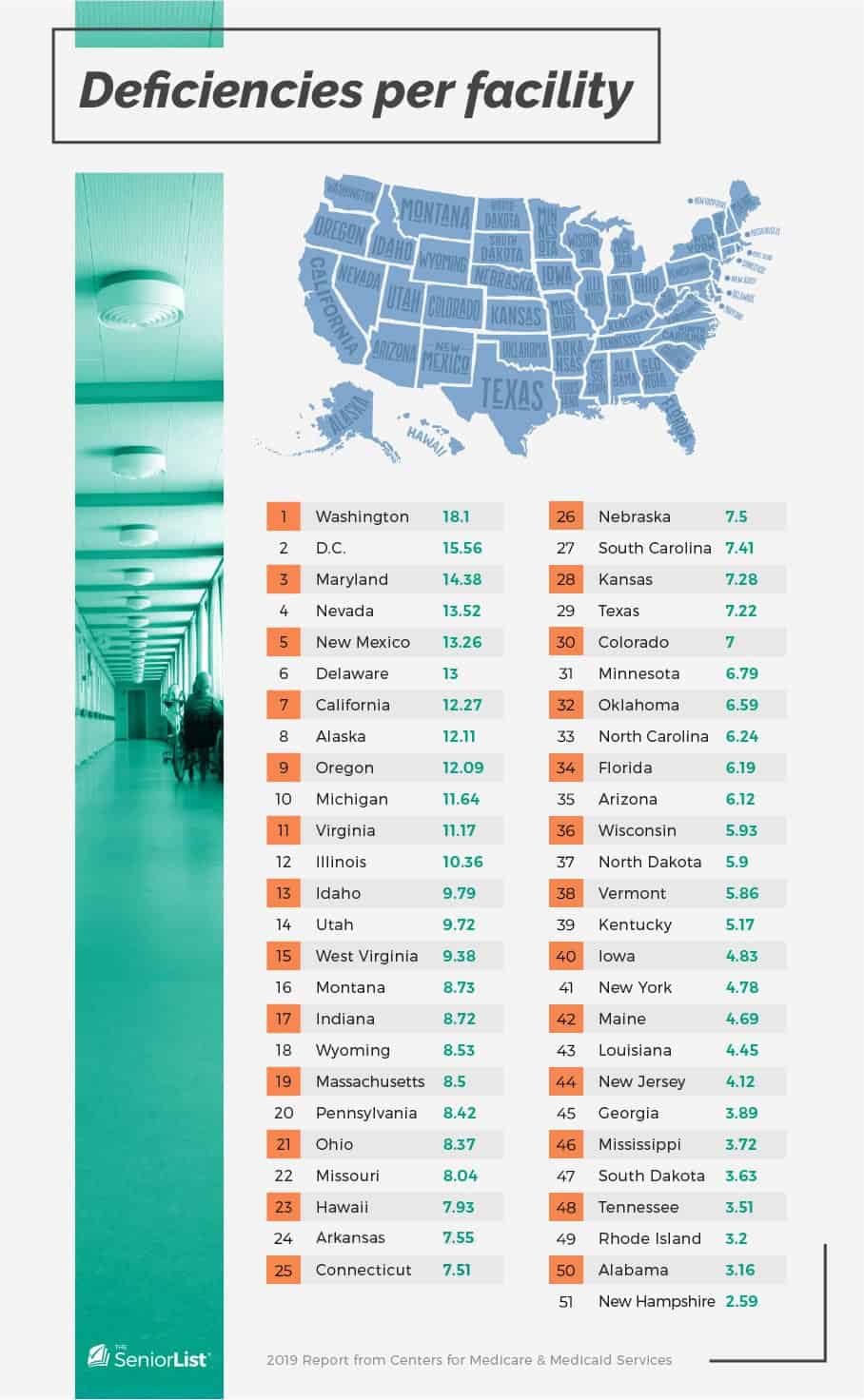 The state of Washington has by far the most issues per facility with the state’s 213 licensed facilities producing more than 3,800 deficiencies in the CMS data. New Hampshire has just 74 licensed facilities, and only 192 issues were reported.

But a simple read of the average number of complaints per facility isn’t really the whole story. CMS uses a complex matrix to determine scope and severity of issues. For instance, while certain administrative failures are technically not allowed, many of those issues don’t directly impact the health or safety of residents.

FYI: Assisted living can be a great alternative to a nursing home. To find a top-tier community near you, read our guide to the best assisted living by city.

There are 12 divisions in the CMS assessment matrix, which categorizes complaints by how serious they are as well as how common they are with that facility. Of the 12 divisions, six of them are indicative of substandard care. So how do the states rank with less-serious incidents removed? 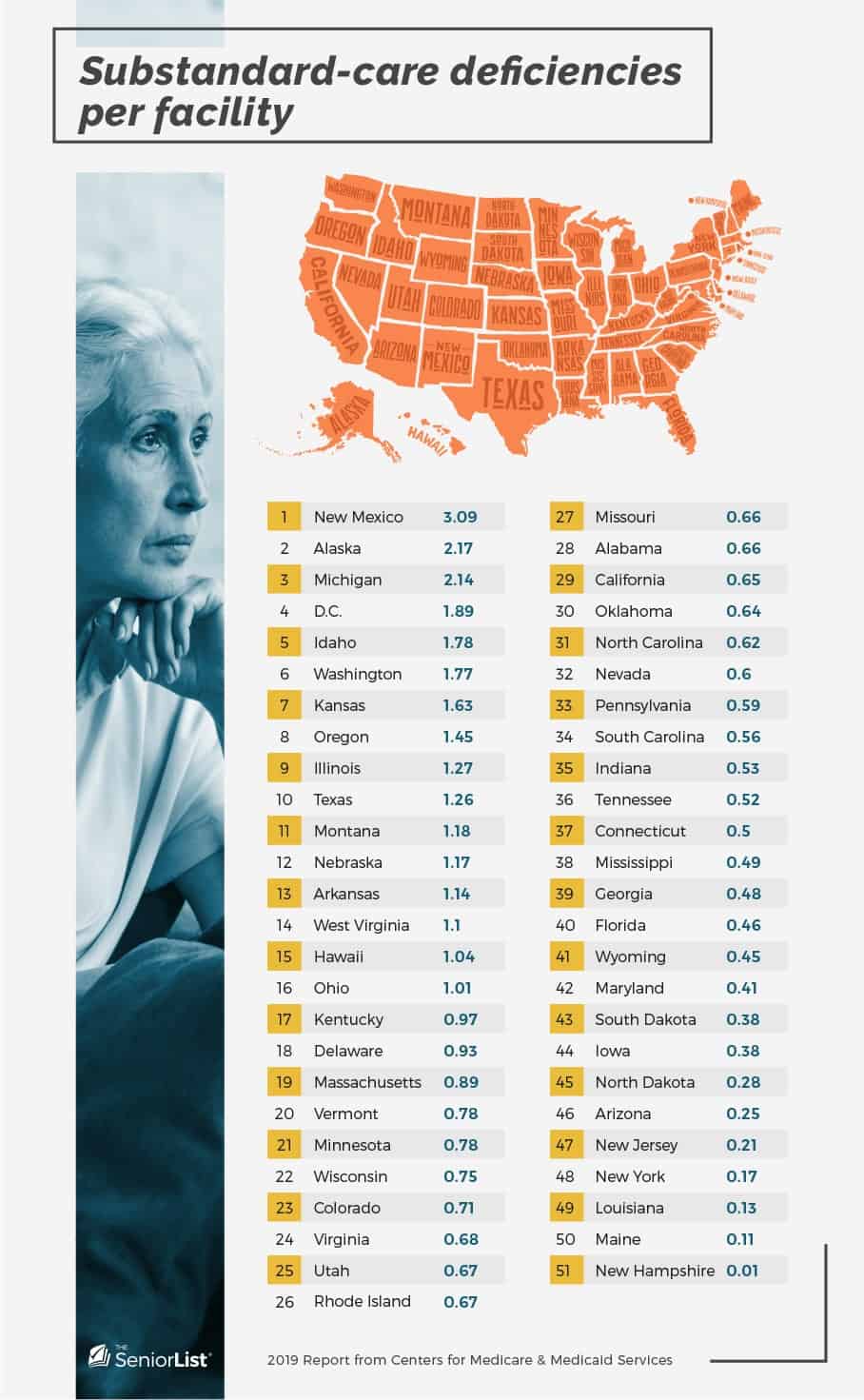 Washington D.C. and New Mexico appear in the top five on both lists, however.

Which Issues
Are Most Common?

In addition to rating how serious and widespread complaints are, the CMS data also categorizes reports by which general area the issue can be slotted into. For instance, is the issue related to the training of staff or the nutrition level of the food offered to residents?

Certain categories, such as quality of care, quality of life and freedom from abuse, are all slotted into the serious deficiency area. Other categories include only some deficiencies that are considered serious.

Nationally, the leading category for complaints is quality of care, which accounts for nearly 1 in 5 deficiencies. 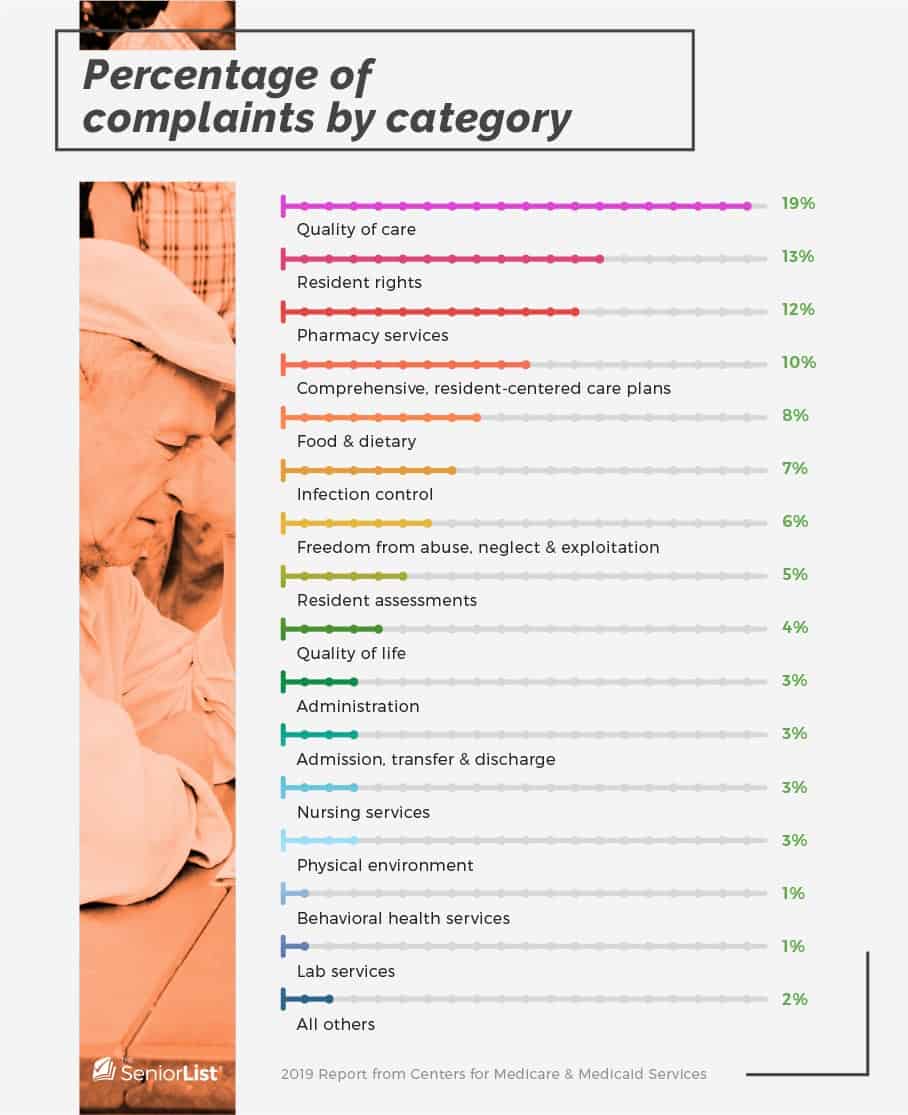 Of the five most common complaint areas, quality of care is both the most frequent and the most concerning for patients and their families. But let’s look at the top five and how they differ from state to state. 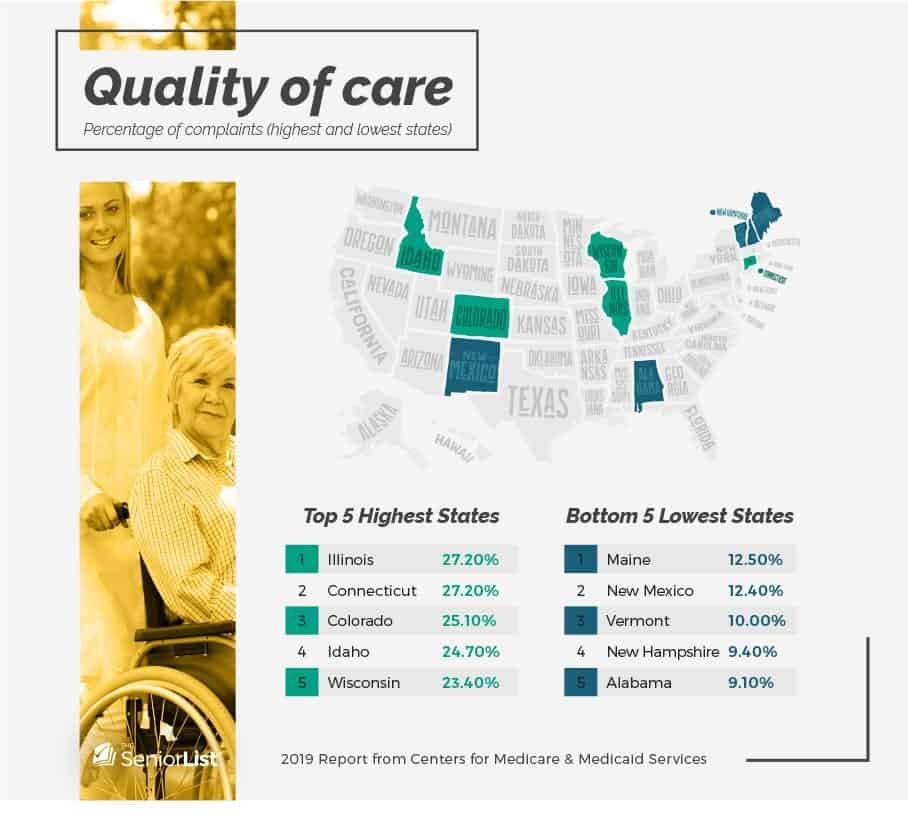 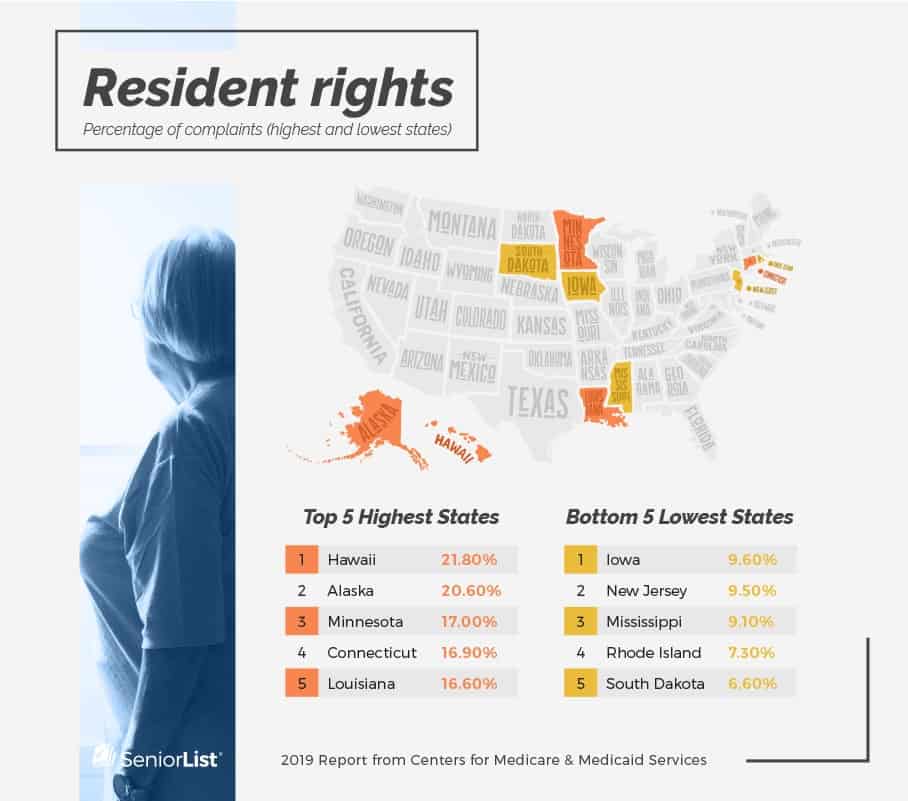 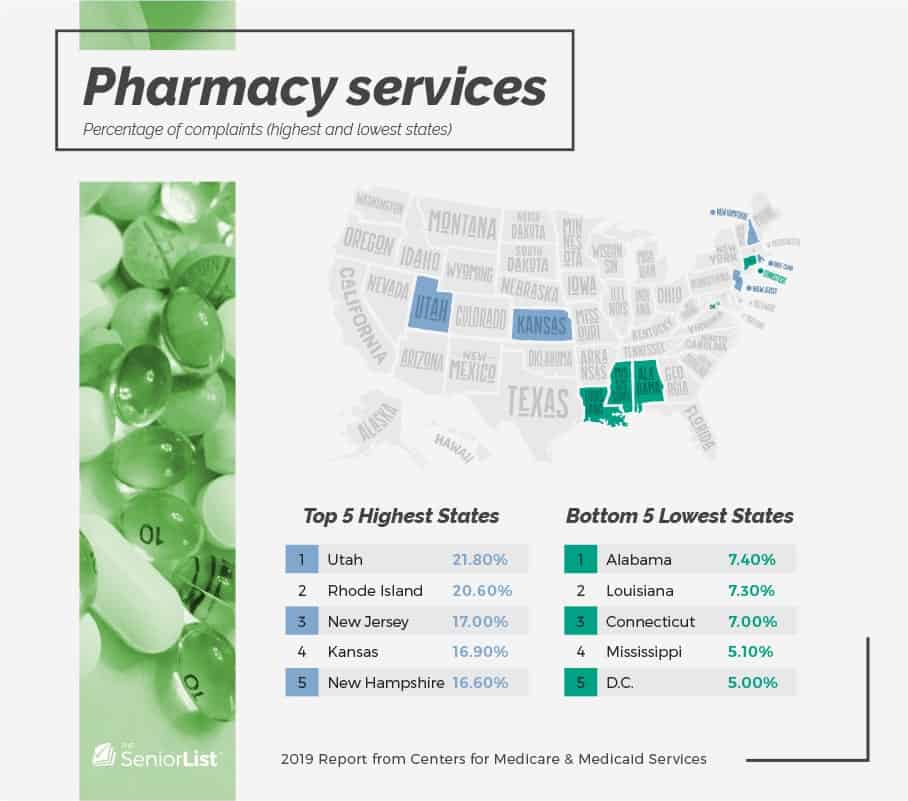 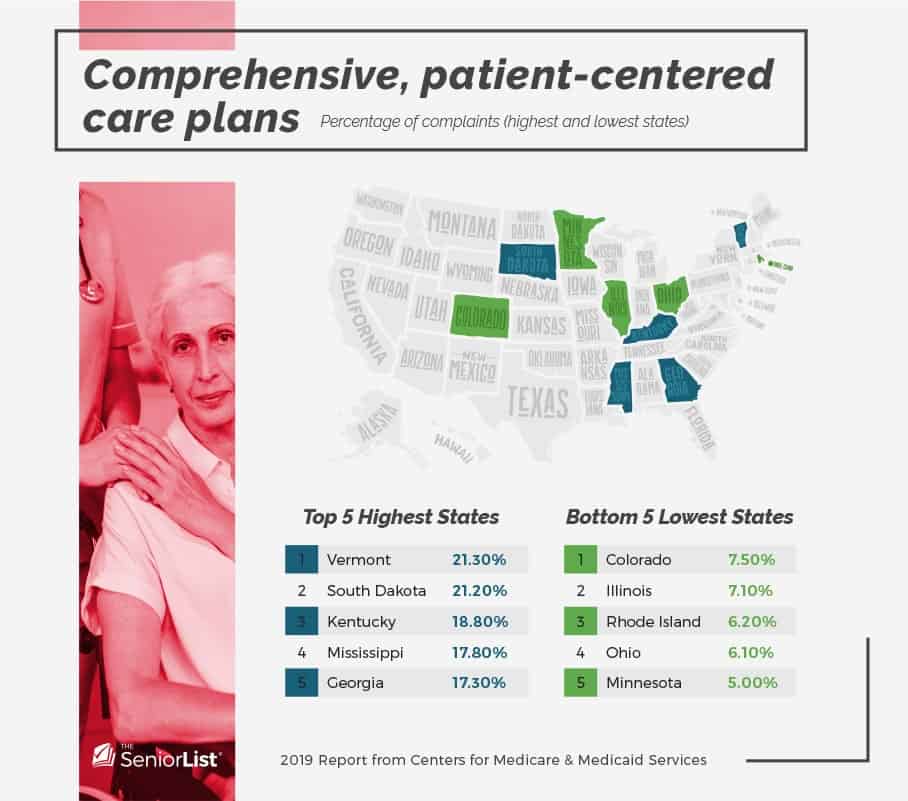 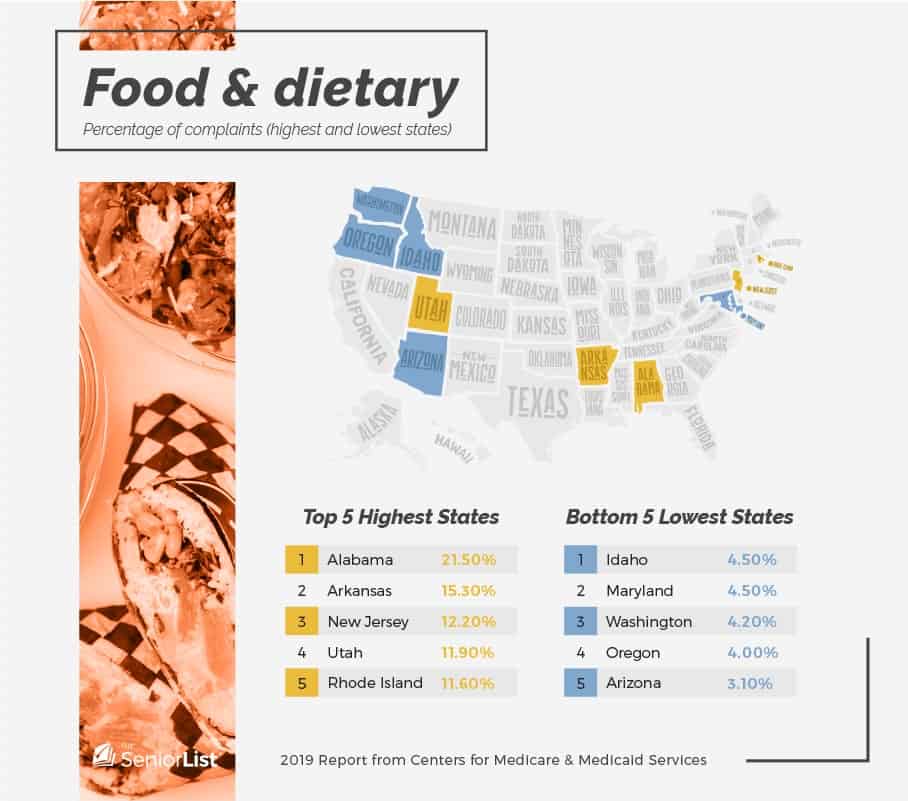 While just a few categories account for the vast majority of reports, a few states are unique in that issues that don’t seem to be huge problems nationally are much more common. 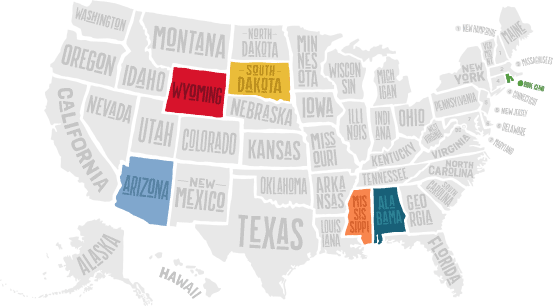 How Are Nursing
Homes Evaluated?

Licensed nursing care facilities are legally obligated to undergo regular inspections that are conducted on a schedule, but complaints also can draw a visit from inspectors. These inspections are conducted at the state level, and the findings are, ideally, reported to CMS.

In addition to maintaining its publicly available database, CMS rates all nursing facilities on a 1- to 5-star scale, and in some cases, fines are issued. 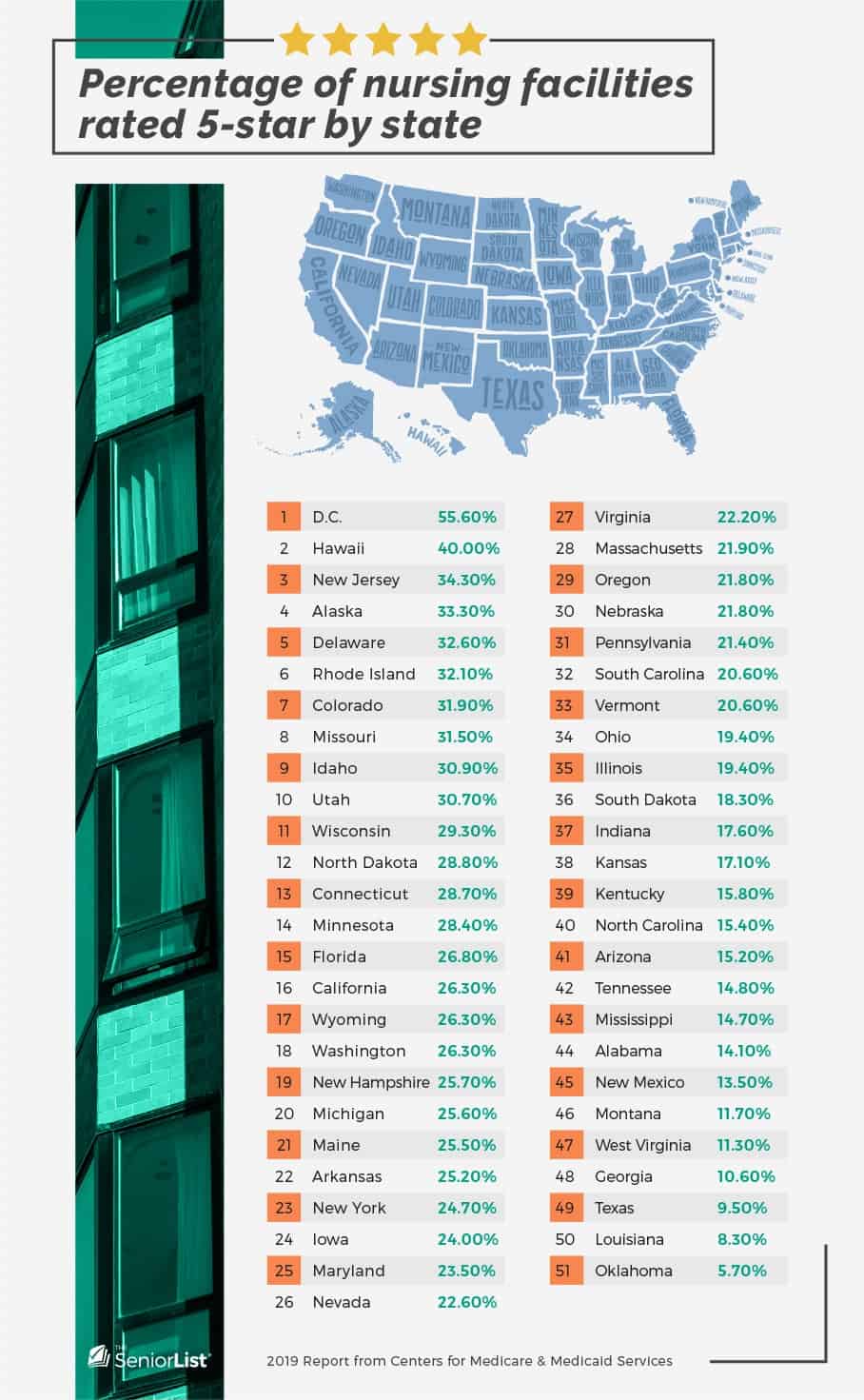 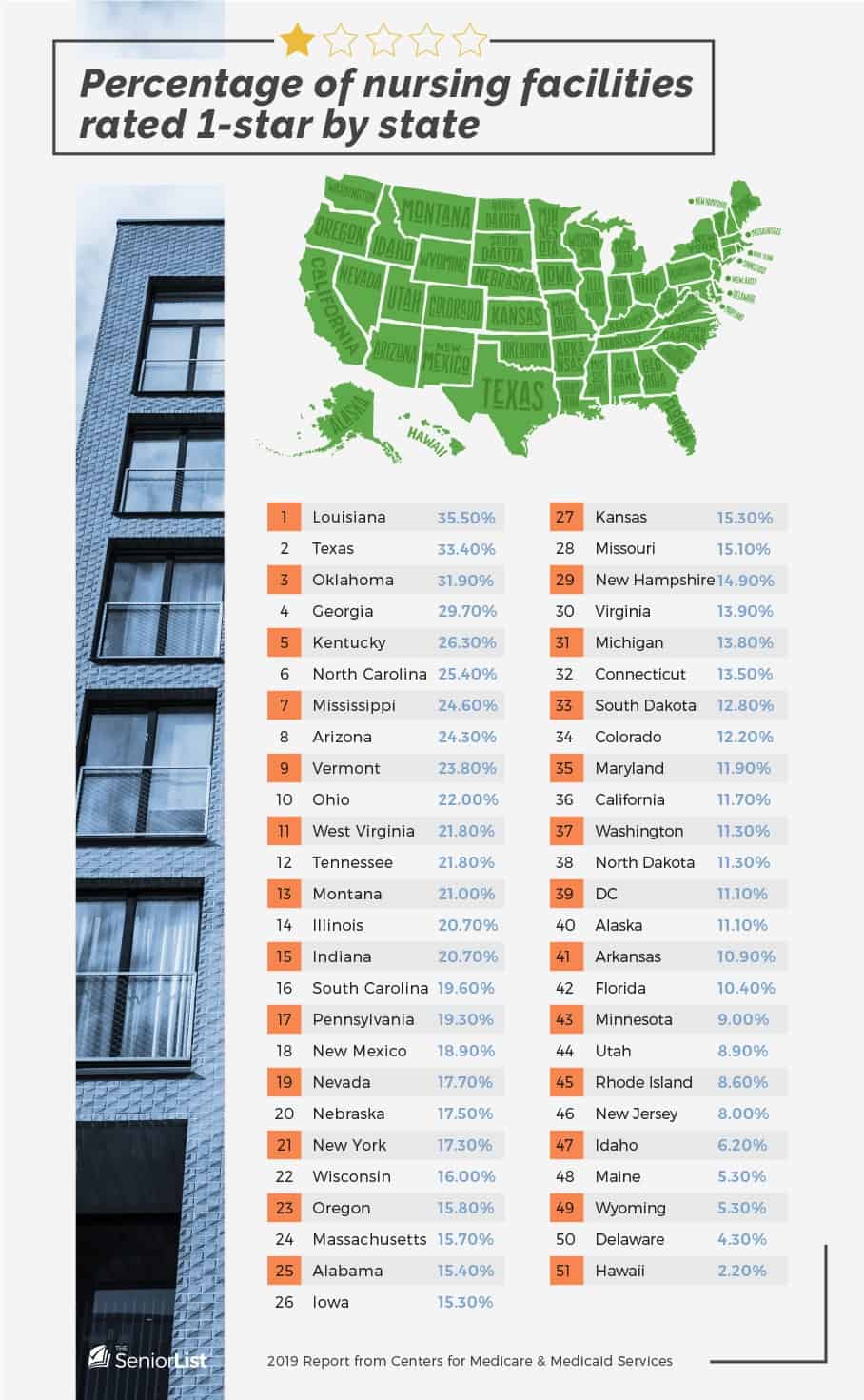 In many cases, CMS levies fines or denies Medicare and Medicaid payment to facilities that are out of and/or remain out of compliance with regulations after inspections. In just the past year, more than $34 million of payment denials and fines have been issued. 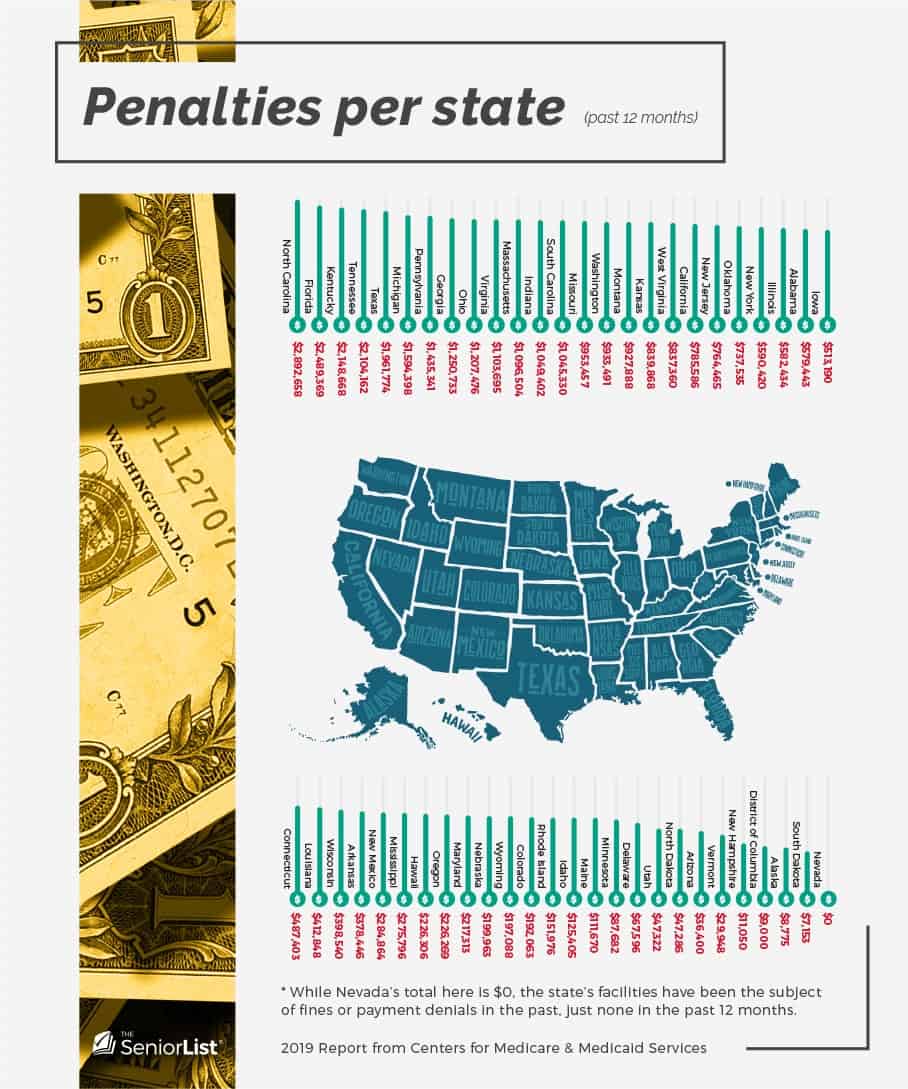 The choice of where a person spends what probably will be their final months and days on earth is an important one that they should be able to make in consultation with their physicians and families. And knowledge is power; more and better oversight may well be needed, but families should use all the tools available to ensure the nursing facilities they and their family members use are focused not on maximizing profit but ensuring quality care, freedom and dignity of residents.

Did You Know: If you’re looking to pay less for prescription medications, check out our list of the best prescription discount cards.

We’ve linked to the original sources of all the data contained in our charts, but it may be helpful to better understand how the Centers for Medicare & Medicaid Services reports this data in the first place.

The CMS Nursing Home Compare and Five-Star Quality Rating tools are updated monthly and include information contained in inspections and site visits conducted in all of the 15,000+ nursing homes on a regular basis (and when complaints warrant). Other reports contributing to the CMS data includes resident assessments, Medicare claims information and staffing levels.

You can access and download the full Nursing Home Compare datasets here, and if you follow that link, you’ll see that the deficiency data is split into three cycles, but for the purposes of our report, we wanted to get the most up-to-date information, so we’ve used the Cycle 1 report, which covers the past year of complaint-spurred inspections and the most recent regularly scheduled inspection for each nursing home. You can learn more about the 5-star system here.

The text and images on this page are free for non-commercial use, but if you want to share this information on your site, please include a link back to the URL of this page.