Images from social media and magazines entice us to visit faraway lands for relaxation and enjoyment, with some suggesting travel can actually make us happier over the long term. But there’s one major catch: money.

How are Americans affording so many vacations? What sacrifices do they make to visit other cities, states, or countries? We surveyed 984 people to find out. If you’re craving your next great vacation, you might want to read what our travelers had to say. 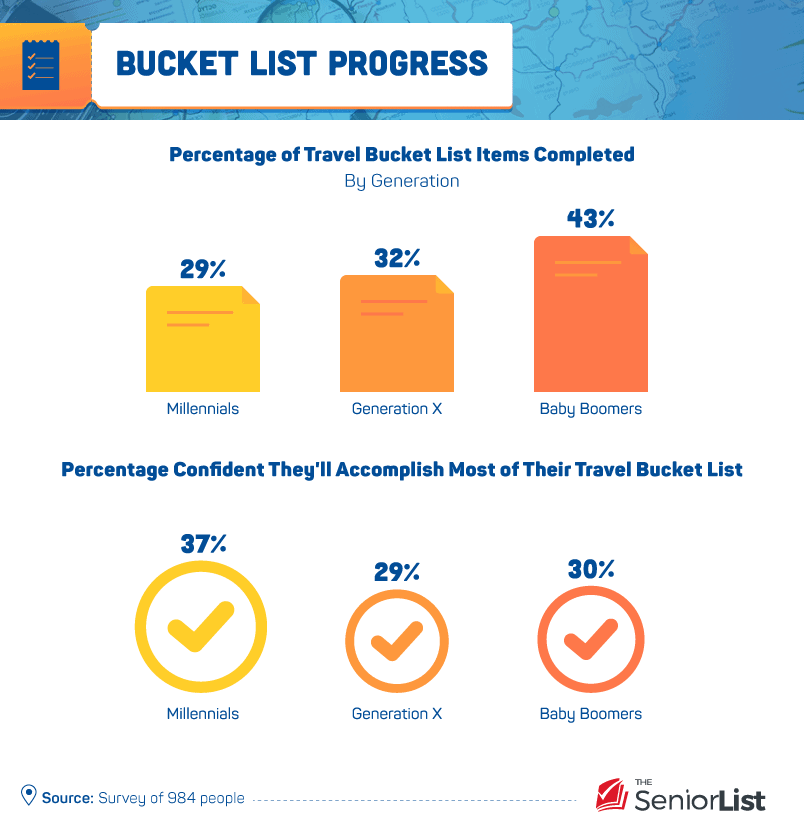 This might reflect Gen Xers’ unfortunate monetary situation, leaving some experts to describe the generation as “financially wrecked.” With more credit card debt than any other generation, as well as an increased likelihood of families and homeownership, Gen Xers have made little headway in checking items off their travel bucket lists compared to their younger counterparts.

Unfortunately, our data showed Gen Xers losing hope, as well. Only 29% of respondents aged 39 to 54 felt optimistic about completing their travel bucket lists. Even baby boomers felt slightly more optimistic. Millennial optimism was unsurpassed, however, with 37% of this generation feeling they would be able to travel everywhere they wanted.

To Travel or Not to Travel 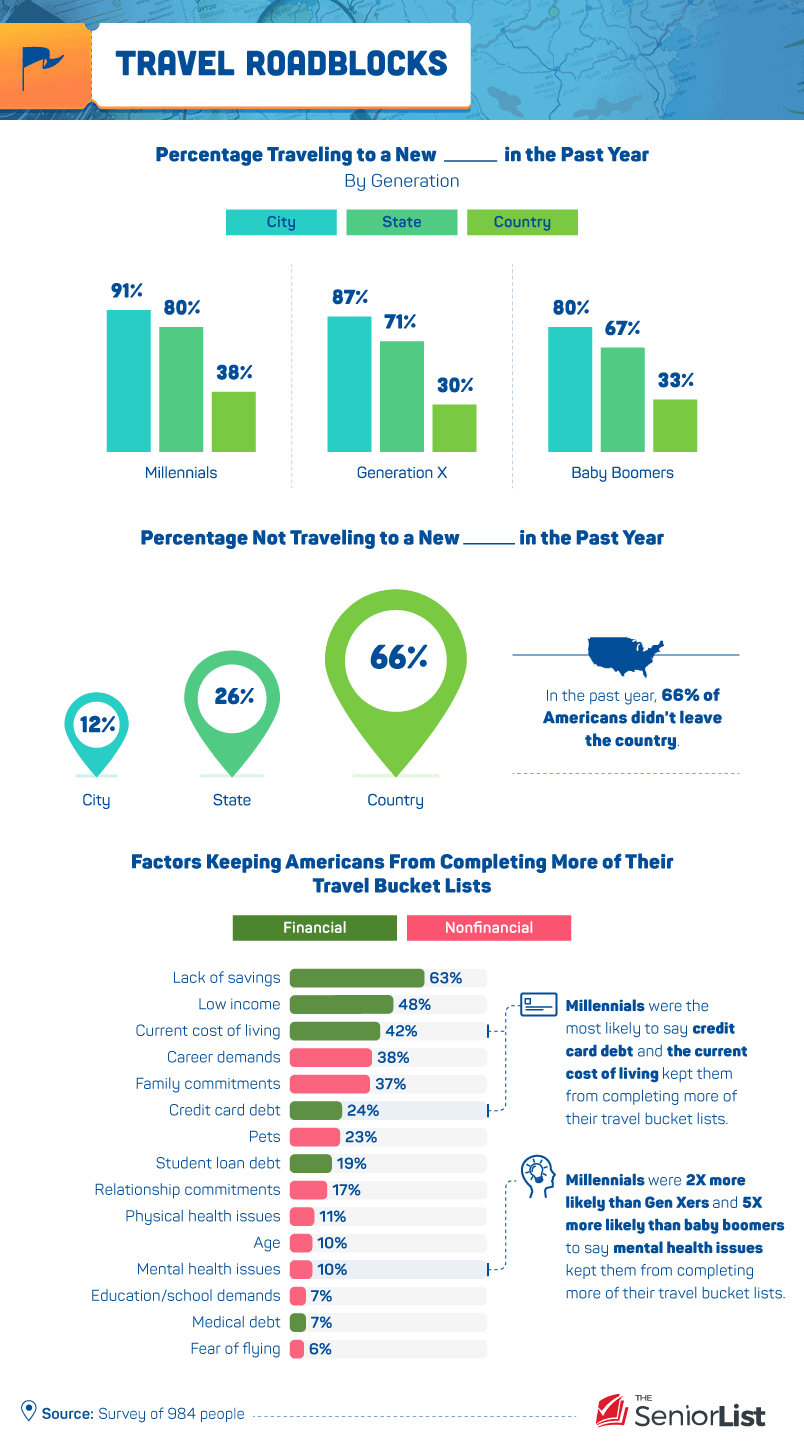 In spite of lowered optimism, significant portions of all three generations had traveled to new cities, states, and countries in the past year. Eighty-seven percent of the least optimistic generation, Generation X, had traveled to a new city in the past year, while 71% had visited a new state, and 30% went to a new country. Surprisingly, though, over 1 in 10 respondents across all ages never left their city.

Millennials have fueled the “staycation” trend, where a traveler can explore and enjoy a vacation more locally. Our data backs this up, revealing 91% of millennials saw a new city in the past year.

But millennials didn’t always do everything right. They were the most likely to say that credit card debt and the current cost of living kept them from checking items off their travel bucket lists. They were also two times more likely than Gen Xers and five times more likely than baby boomers to say their mental health prevented them from taking vacations. This may be an unfortunate Catch-22, as a vacation has been shown to alleviate stress and even improve life satisfaction. 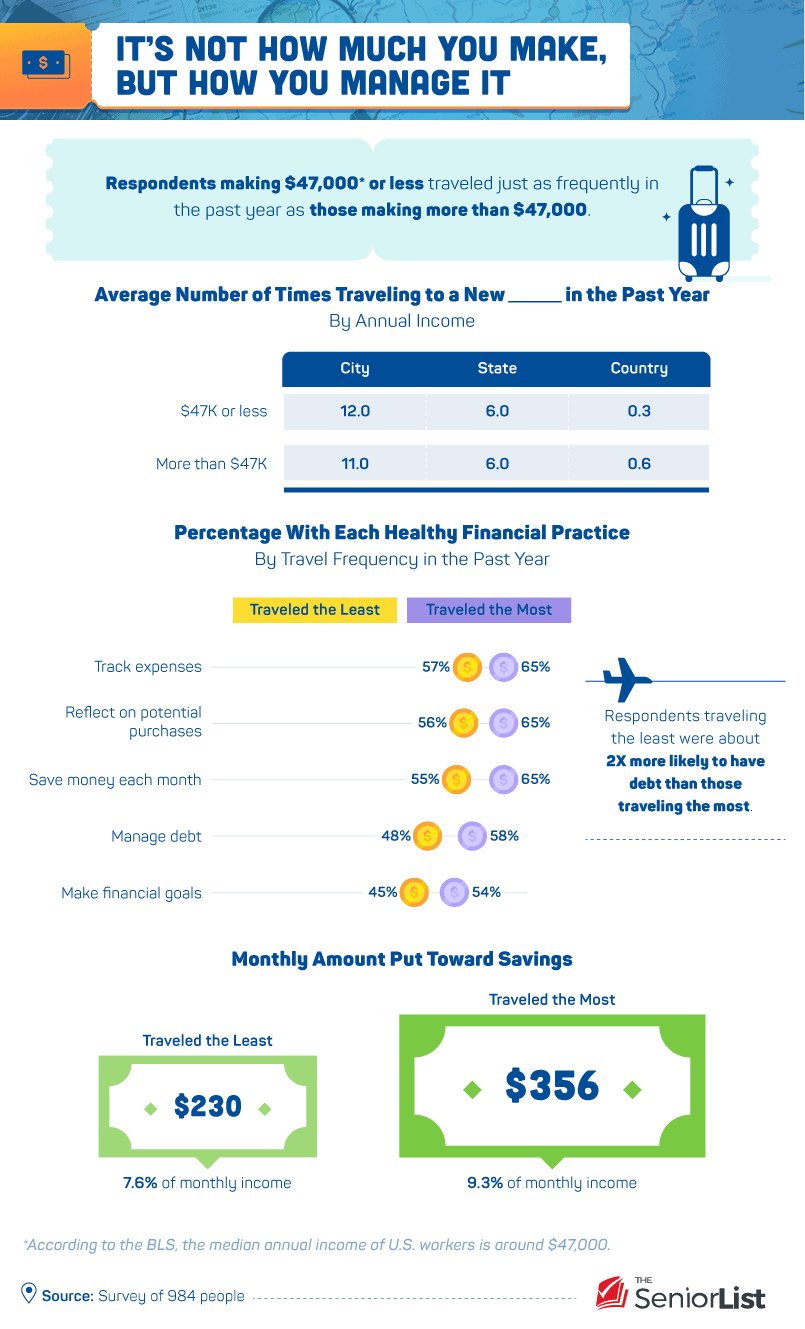 Considering respondents often cited financial issues as reasons they were unable to travel, you might wonder how income made little to no impact on respondents’ travel history. The explanation respondents shared was money management. How a person managed their finances mattered significantly more than the overall amount of money they made. People who traveled the most were more likely to do the following: track their expenses, reflect on potential purchases, save each month, manage debt, and make financial goals.

It may seem that the battle is won once you’re actually on vacation, but the average American was unable to enjoy the aftermath of vacation bliss due to poor spending habits while away. Respondents reported feeling the adverse financial effects of overspending on a trip for an average of four months after returning home. 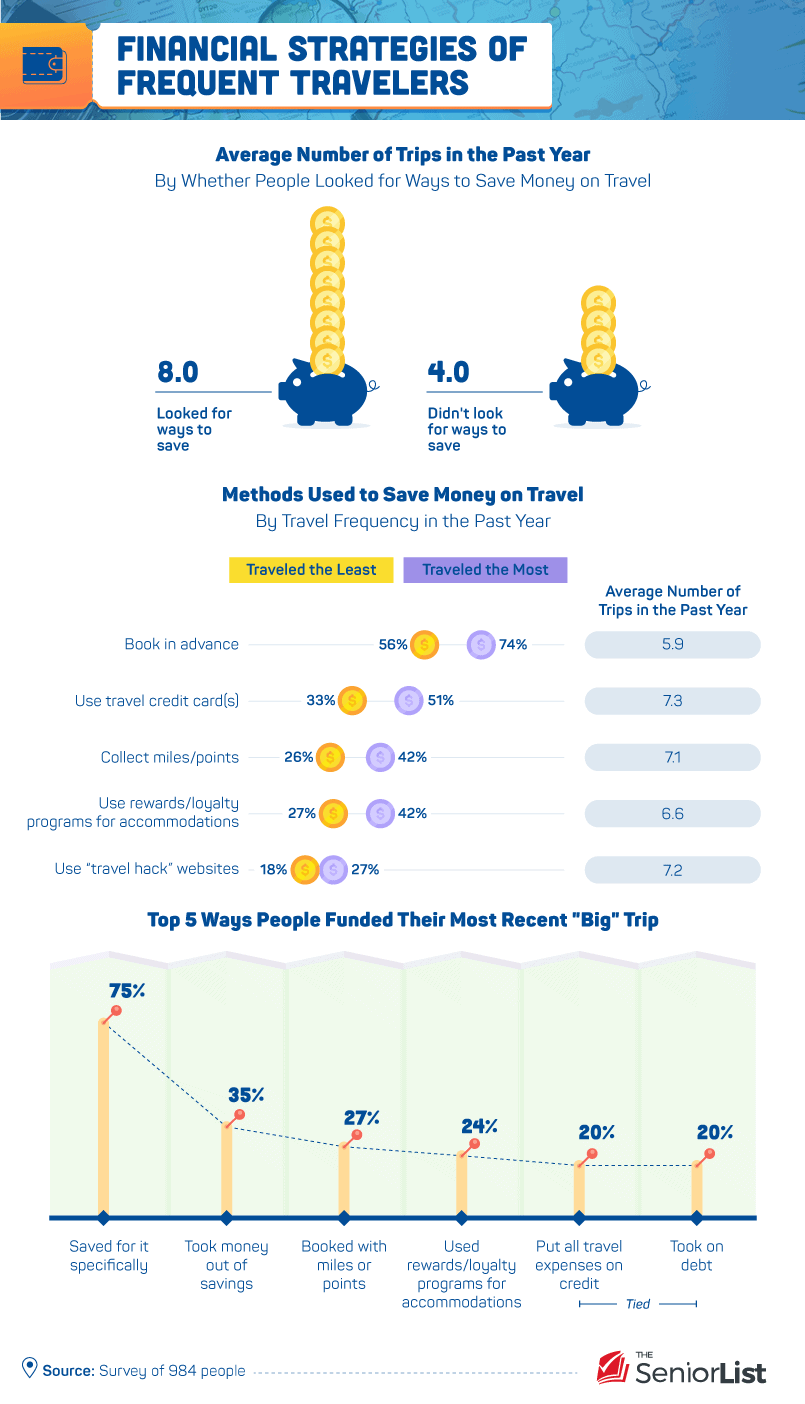 Simply put, saving money afforded more travel. Respondents who looked for ways to save on travel took twice as many trips, on average, in the past year compared to those who traveled without looking for ways to save. Those traveling the most frequently said they saved money by booking in advance (74%), using travel credit cards (51%), and collecting miles or points (42%).

When you want that big trip, however, credit card tricks and advanced booking may not cut it. You’ll have to save – a tactic 75% of respondents said they did to afford their last big trip. Unfortunately for the nation’s overwhelming debt levels, 1 in 5 also took on debt to fund their latest big trip.

Saving and Seeing the World 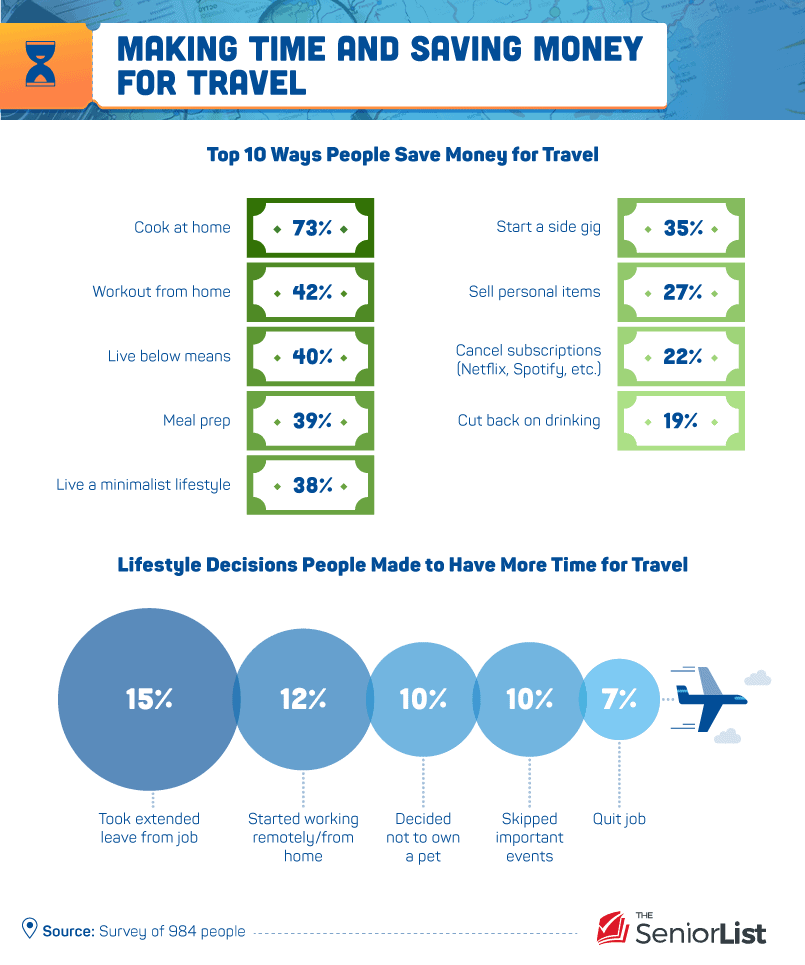 Going into debt wasn’t the only thing Americans did to afford their dream vacations. Many were more responsible. Seventy-three percent told us they cooked instead of dining out to help afford their next vacation. Forty-two percent started working out at home, while another 40% said they lived below their means. And instead of streaming nature documentaries about their next great trip, 22% canceled their subscriptions to save and see it in real life.

Careers, however, were rarely jeopardized for travel. Just 15% took an extended leave from their jobs for vacation, and only 12% tried working remotely while moving about the world. Pets were an even rarer sacrifice, with only 10% saying they postponed getting a pet to travel more freely.

Traveling the World in Financial Style

Where there’s a will, there’s a way. And if the will is to travel, the way is a savings account – or at least more financially responsible behavior. Lifestyle changes before a vacation or any large purchase can make checking items off a bucket list more of a reality than a fantasy.

Whatever your travel or financial goals are, don’t be afraid to dream far and wide. There are a seemingly infinite list of places to go and ways to get there. While traveling may temporarily deplete your bank account, it will make your life rich. So save, travel, repeat.

We surveyed 984 people about their travel experiences, lifestyle activities, and financial habits. For respondents to be included in our data, they were required to complete the entire survey and pass an attention-check question. Participants who failed to do either of these were excluded from the study.

The data we are presenting rely on self-reporting. There are many issues with self-reported data. These issues include but are not limited to: selective memory, telescoping, attribution, and exaggeration. In finding averages of quantitative values, we removed outliers so that data were not exaggerated.

If you’re already online, you’ve probably seen some inspiration for that next great vacation. Make sure to pair that inspiration with some data-backed knowledge. You’re welcome to share this research online for noncommercial purposes, so long as you link back to this page.