Where Do Paychecks Stretch Farthest?

In fact, the average American buying a home in the 1940s would spend the equivalent of about $45,000 in today’s dollars. Education, consumer goods, healthcare — the costs of all of these have increased even in just the past decade.

Of course, during this same time, the average wage for full-time workers has gone up, too, from an inflation-adjusted $38,000 in 2008 to about $50,000 today. But is that higher wage enough to adequately offset the cost of living in the United States, which it seems will be going in only one direction — up?

Did You Know: Are you planning to retire early? Read our guide to the best states for early retirees to learn about your best options for relocation.

And how do the states compare to each other when it comes to how much consumers spend vs. how much workers earn? Which states are most affordable, and where do people spend the most on things like housing, groceries, clothing and healthcare? In other words, in which state will the average paycheck go the farthest?

To understand how much the average person spends in each state, we’ll examine data from the Bureau of Economic Analysis (BEA), which calculates consumer spending in a range of categories, from spending on necessities like food to more fun items like theme park visits, and compare those numbers to data from the Bureau of Labor Statistics (BLS) that covers what the average full-time worker earns in a year.

Americans spent a per-capita $40,878 in 2017, the most recent year for which BEA data is available. This includes spending on things like housing, utilities, food, clothing, furnishings, healthcare, transportation services, household services, financial services, insurance and more. This measure of voluntary consumer spending includes spending on necessities like housing but also on discretionary spending like books and luggage. Not included in the BEA’s measurement are things like finance charges or income tax.

Did You Know: Where you live is the only factor you’ll want to consider in retirement. To learn more about straightening out your affairs, read my guide: What Is Estate Planning?

In 2017, the average full-time worker earned about $50,000 per year, which means that they spent at least 81% of what they made — and probably more, given that the average American has about $9,500 in credit card debt.

So how do the states compare when it comes to how much of the state’s average annual income is eaten up by consumer spending? Interestingly, one of the most expensive places to live in the country — the District of Columbia — is actually the most affordable when compared to what people earn, according to this measure. 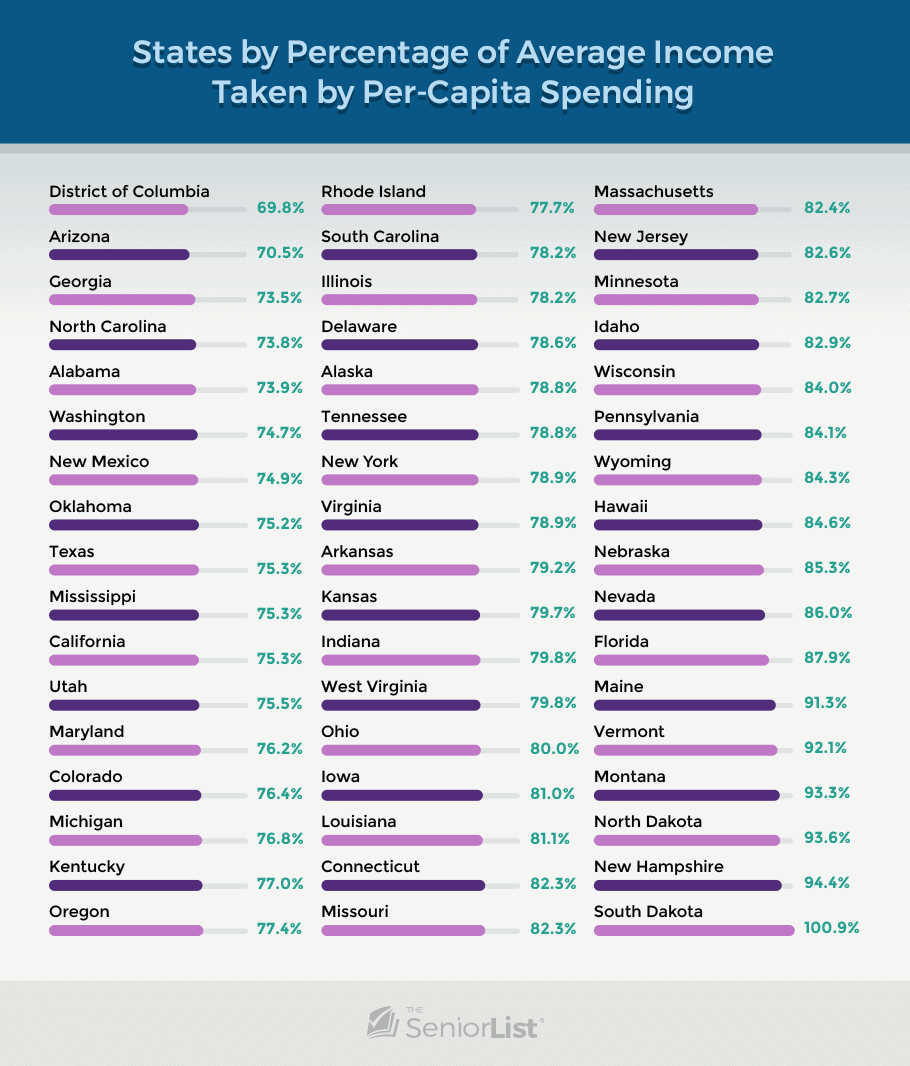 This simple comparison shows that the least affordable state in the U.S. is South Dakota, where consumers spend more per capita than the average worker makes in a year. Several other states also have a ratio of spending-to-income that’s higher than the national average of 81%.

The South is the most affordable region in the country, according to our analysis, followed by the West. Americans living in the Northeast see the highest proportion of income eaten up by spending. 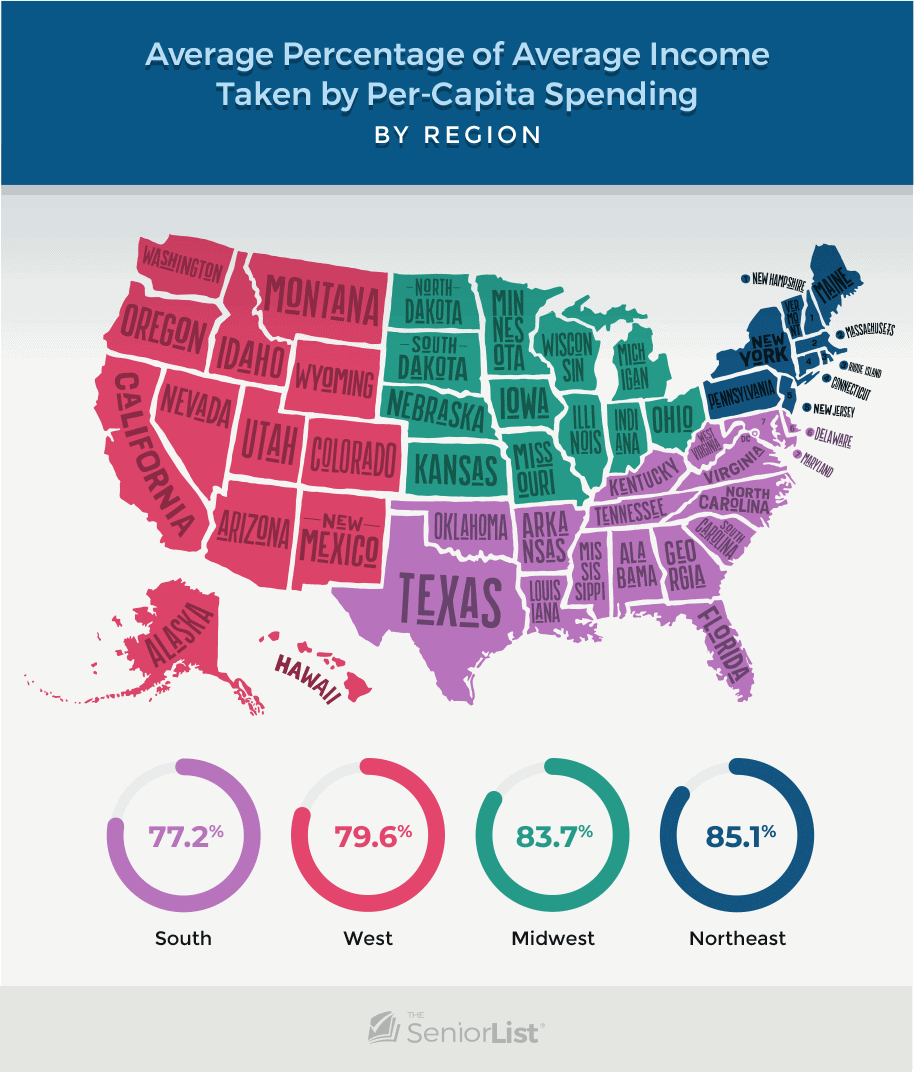 What Are We Spending
the Most Money On?

The average American spends more on housing and utilities than any other specific individual spending category, followed closely by healthcare. In fact, housing and healthcare combine to account for nearly half of the spending in these detailed categories.

Just as overall cost of living varies widely across the country, so, too, does spending in these individual areas. For example, groceries cost an average of $4,577 in D.C., while healthcare in Alaska is the most expensive at $10,859 per capita. Let’s look at the highest and lowest spending for the top three categories: 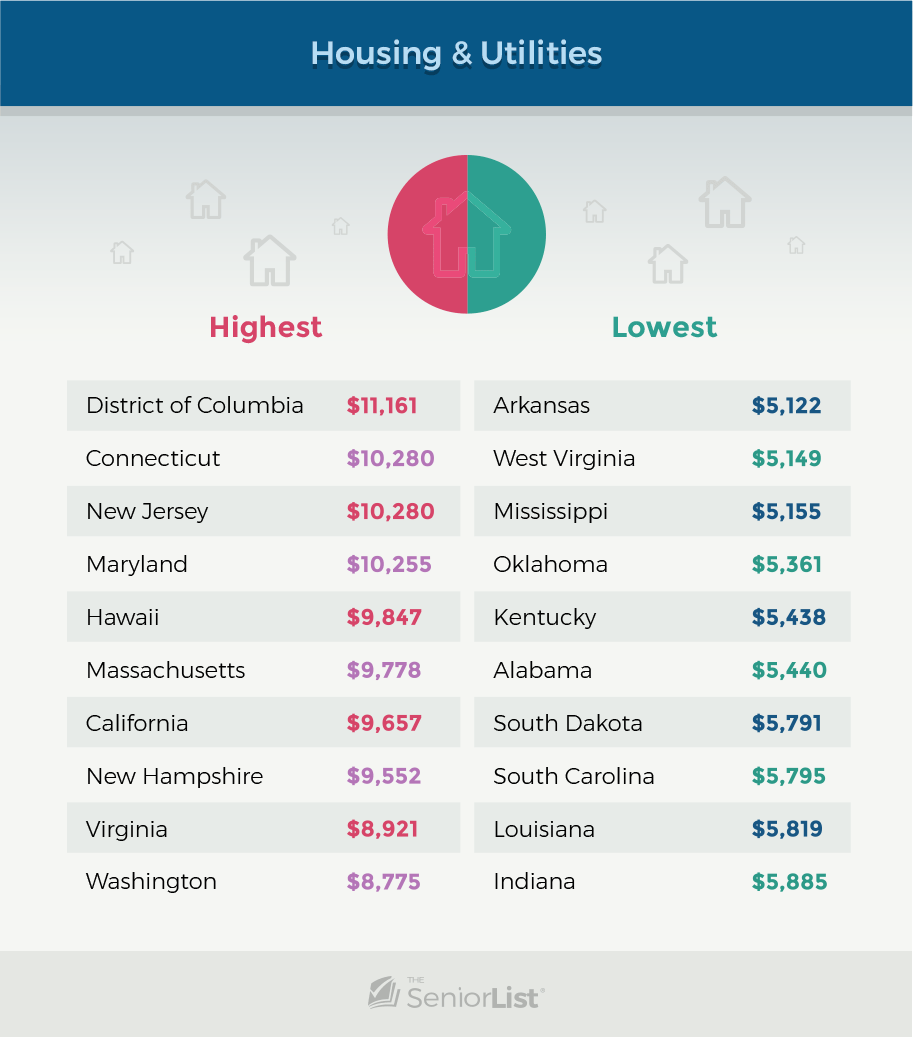 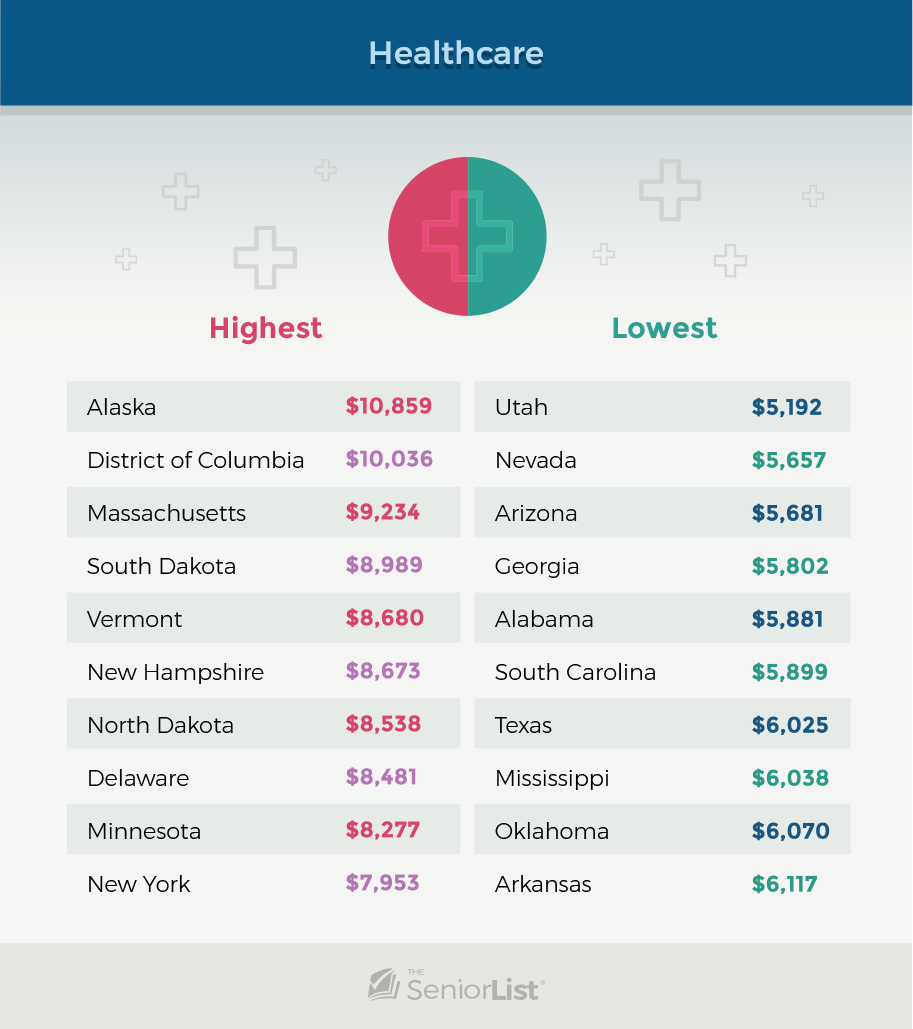 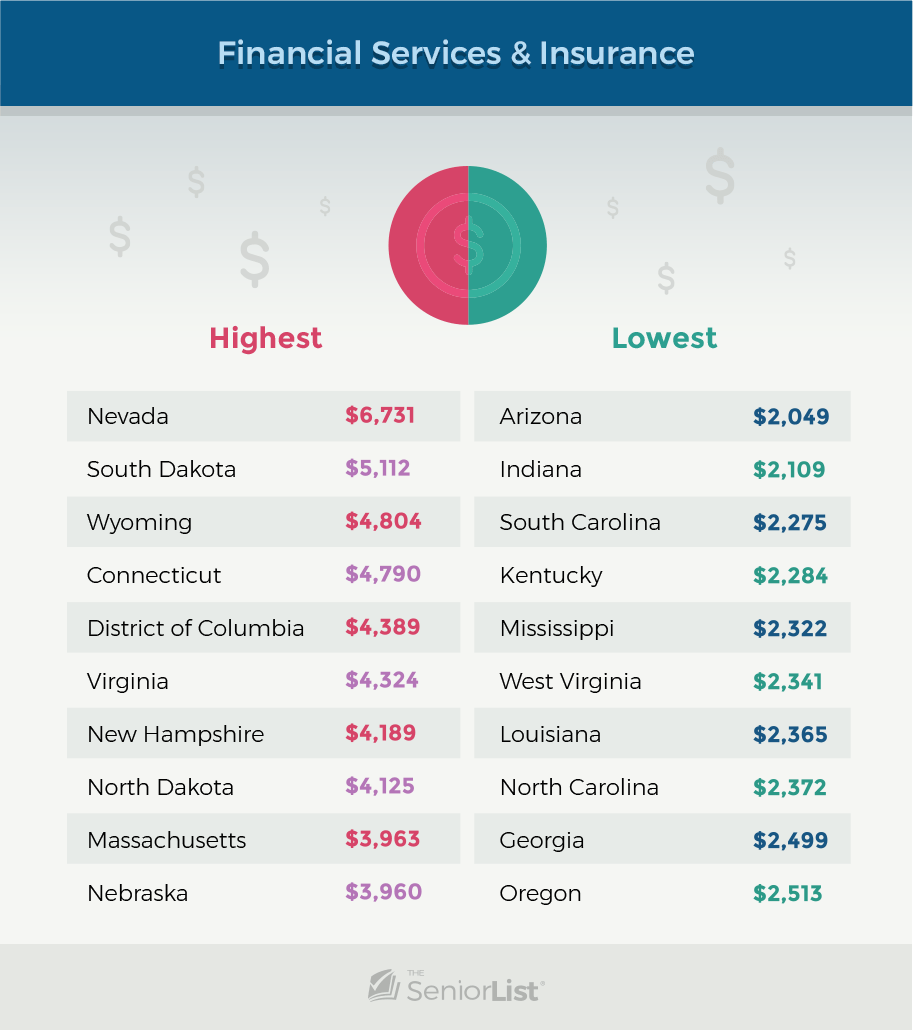 Regionally, Midwesterners spend the least on groceries, while Northeasterners spend the most on recreational services, which includes things like admission to sporting events or theme parks. Here’s a look at average spending by region for some select categories: 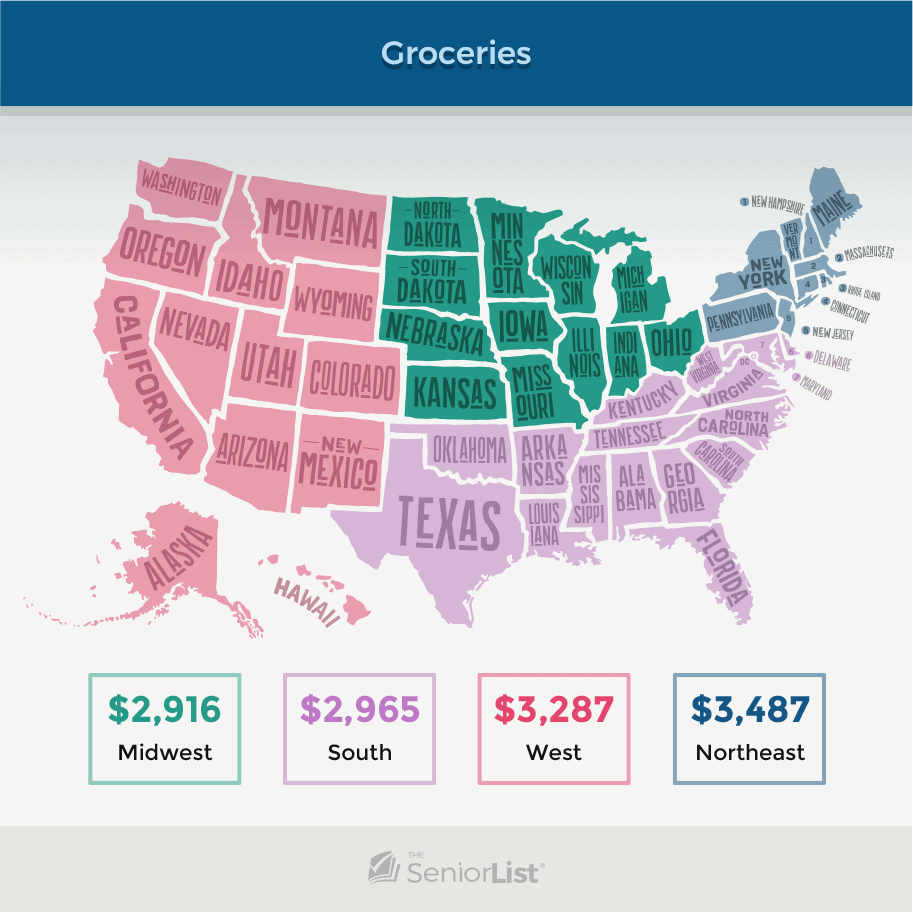 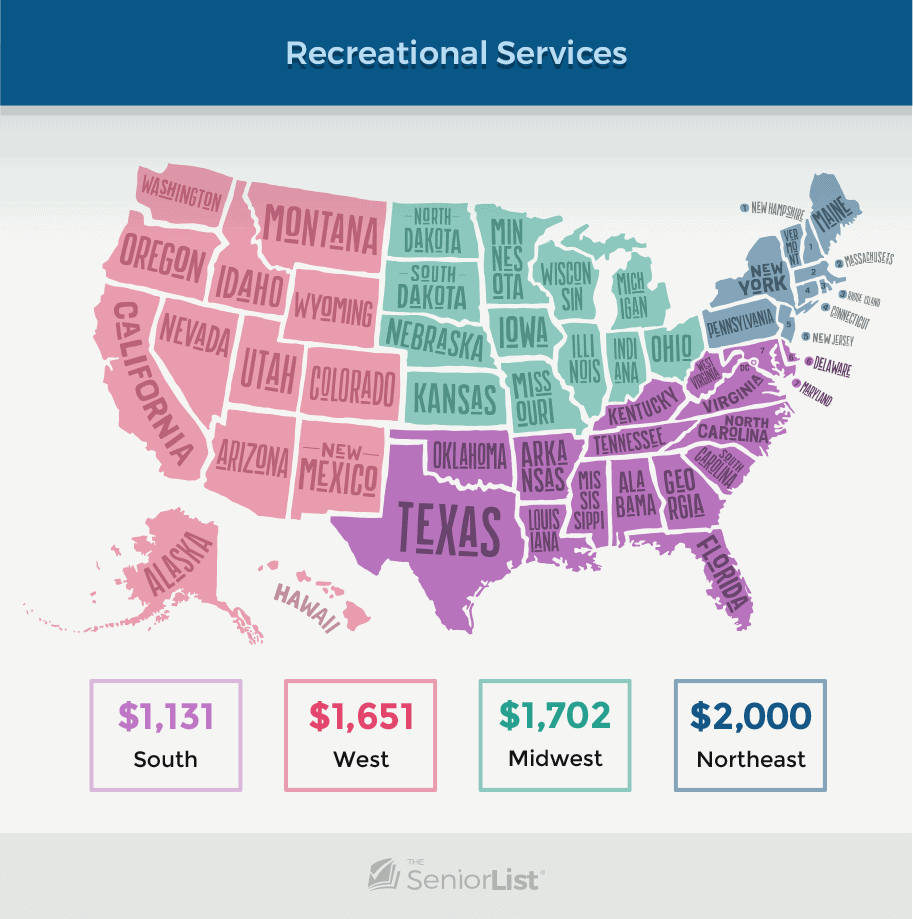 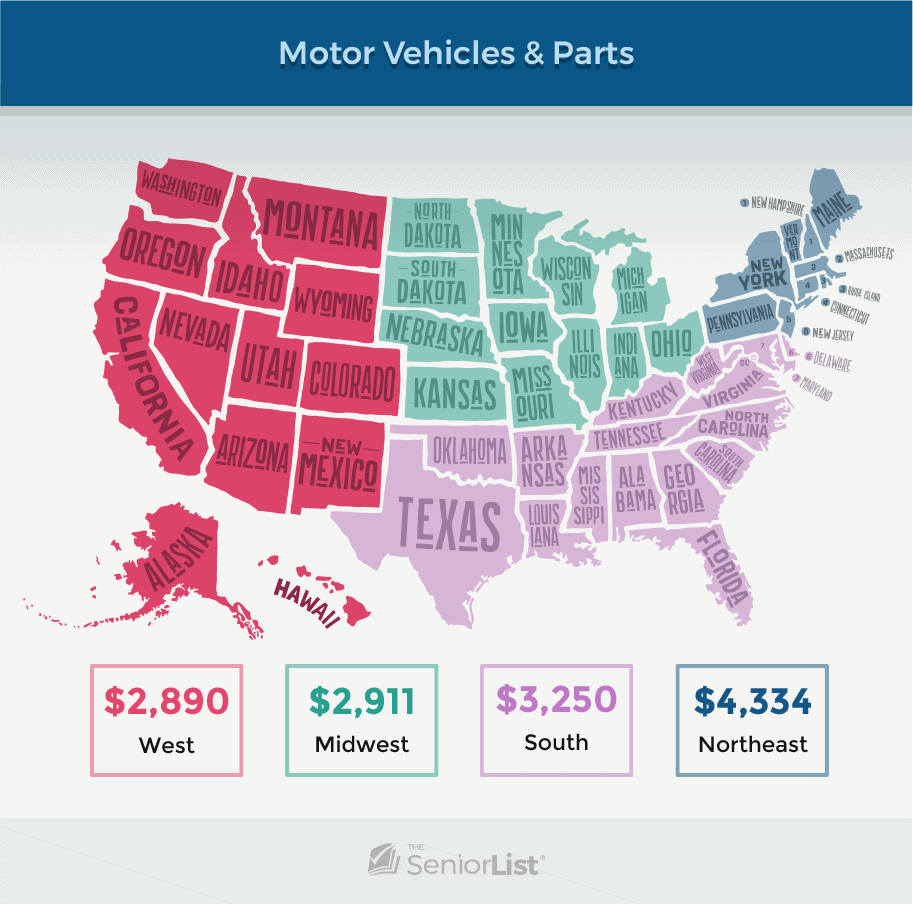 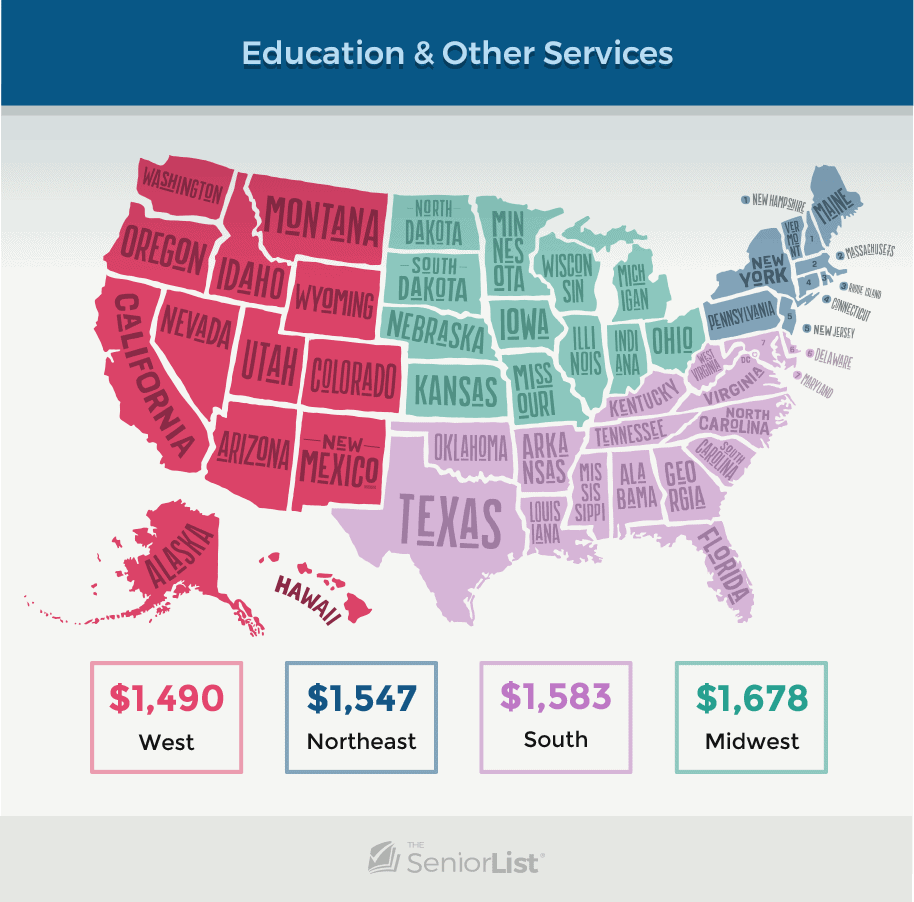 How Have
Things Changed?

In every state, Americans have increased expenditures over the past decade, though some of the increases are quite modest and keep up well with inflation. Others, however, have seen double-digit expenditure increases. 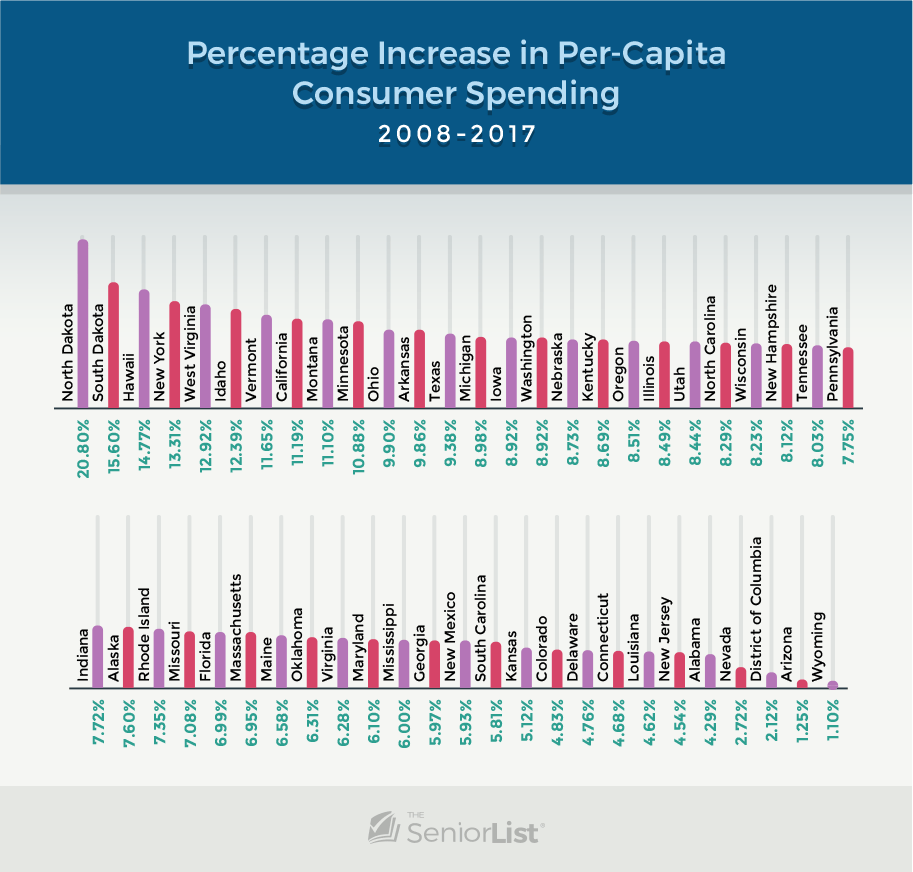 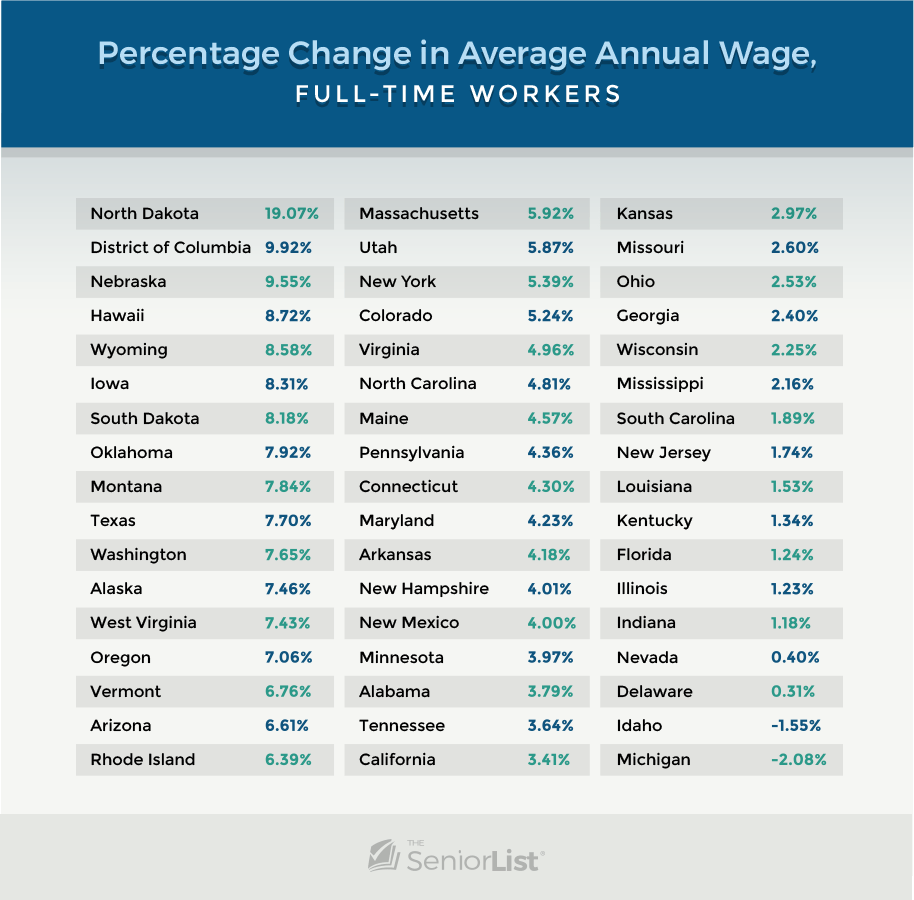 The majority of states have become less affordable for consumers since 2008, though some states have seen high enough wage increases that living there eats up less income than it did 10 years ago. 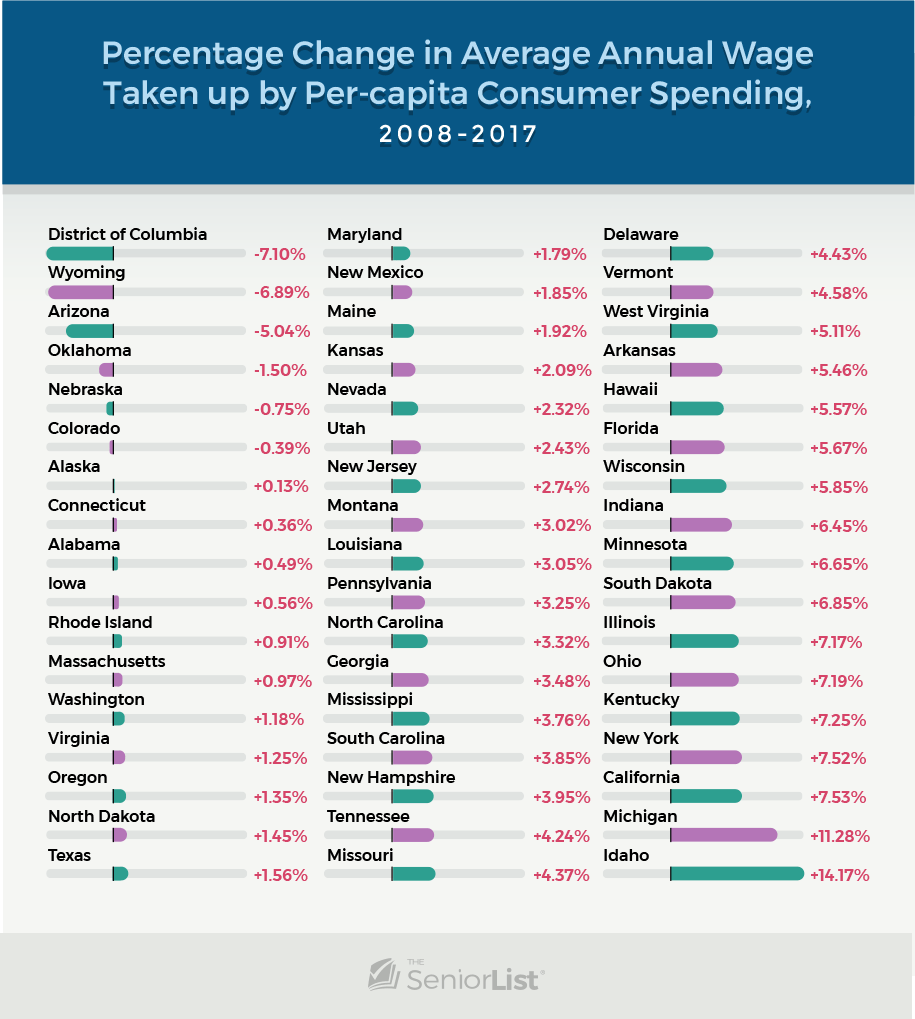 If it feels like you’re working more hours for less money to spend on things that cost a lot more than they used to, it’s probably because that’s exactly what’s happening. Even after adjusting for inflationary effects over the past 10 years, the average American worker (outside of North Dakota) who has seen wages increase is enjoying only about 4.5% more income than they were a decade ago. Put in plain terms: That $20 bill in your pocket would grow to just $20.93. In every state, consumers are spending more today than they spent 10 years ago, and full-time workers in two states have actually seen wages decline since 2008.

All consumer spending is variable, and we all have different priorities when it comes to budgeting, but a plain reading of the data clearly shows that the typical American is spending more and not necessarily earning enough to keep up.

FYI: While the costs of in-home care can be steep, a budget-friendly medical alert system can be a great way to keep your loved one safe.

There are myriad ways to calculate cost of living and affordability by state. We wanted to use a way that would be simple to understand, so we used just two data sources — the Bureau of Economic Analysis and the Bureau of Labor Statistics.

We’ve already partially addressed some of the limitations of the BEA data. For instance, employer spending on behalf of employees, such as workplace health insurance, is excluded, as are some other household spending. Most notably, perhaps, for the average consumer is that income tax is also excluded from this measure, so it’s important to note that the BEA’s consumer spending data consists largely of voluntary spending, and taxes certainly don’t qualify. Additionally, used a figure that represents total consumer spending minus expenditures of nonprofits that serve households, which can serve to offset the cost of various goods and services. The most recent complete year for which the BEA has published data is 2017.

Data on the average wage came from tables published by the BLS for 2017 and 2008. All 2008 figures for both spending and income were adjusted for inflation using this calculator.

Any reader is free to share the data and analysis they see on this page for noncommercial uses. Please be sure to provide a link back to the URL of this page to give ample credit.