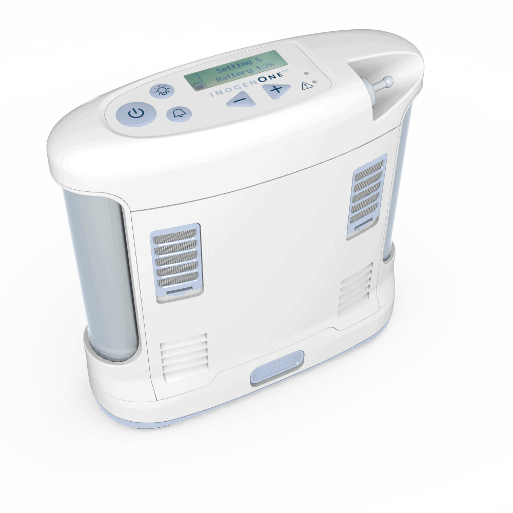 Share: copied!
The Senior List is compensated when you click on the provider links listed on this page. This compensation does not impact our ratings or reviews.
Products and Pricing Purchasing Parts and Accessories System Setup Returns and Warranties

We picked out another recommendation worth considering:

Inogen revolutionized older adult respiratory care in 2001 when it introduced the first-ever portable oxygen concentrator that did not require refills. Instead, the machine purified oxygen from its surrounding environment, eliminating the need for bulky oxygen tanks. Twenty years later, Inogen continues to give people who use oxygen therapy the confidence, freedom, and independence of an active lifestyle.

In this rundown, I’ll provide a thorough overview of Inogen, including its systems, how they function, what they cost, and their overall value. Let’s take a closer look.

Pro Tip: Are you new to the world of portable oxygen concentrators? Check out my Portable Oxygen Concentrator Guide to learn about how the technology works and how much it costs.

Inogen offers four oxygen concentrators, three of which are portable. Base unit prices range from about $1,500 to about $2,600, and Inogen provides several package options for each concentrator and its related parts and accessories.

Quiet yet powerful, the G3 system weighs only 4.8 pounds and maintains the same oxygen purity as larger concentrators. It has five flow settings, so it can accommodate changes in conditions over time. The G3 concentrator also meets FAA travel guidelines, which comes in handy if you travel by air frequently. Inogen’s Intelligent Delivery Technology ensures the G3 concentrator provides safe oxygen delivery during rest, exertion, and sleep, and the system is clinically validated for 24/7 use.

Available only through Medicare or insurance, Inogen’s portable G3 system is ideal for use at home or while on the go. Capable of running for up to 10 hours without a recharge, the G3 system, which can also charge via carport, allows for all day independence.

Known for its portability, the G4 is the smallest Inogen system, which makes the FAA-approved device perfect for air travel. Weighing only 2.8 pounds — less than an average toaster — the G4 won’t hold you back or slow you down like heavier tanks.

The G4 base unit, priced at $2,295, matches the purity of larger concentrators and is clinically validated for 24/7 use. Its three flow settings are fewer than its predecessor, though, which limits its accommodation of prescription changes. It’s a trade-off you may be willing to make for such a compact and lightweight system.

The other primary difference between the G4 and its predecessor is that the G4 has a limited charge. Its single battery lasts less than three hours, and its double battery lasts only five hours before needing a charge. That may be fine if you are not always on the go or if you have breaks during your day, but I’d recommend purchasing extra batteries since it sometimes takes several hours to reach a full charge.

The G4 starts to make up for its lack of battery power with the addition of the Inogen Connect app, which helps you monitor battery life, update your system’s software, and access customer support.

Delivering the most oxygen per pound of any concentrator on the market, Inogen’s portable G5 system is priced at $2,395. Its single battery lasts more than six hours, and its double battery can go for up to 13 hours. Compact and weighing less than 5 pounds, this machine fits easily in a tote bag or backpack.

Like all of Inogen’s concentrators, the G5 is clinically validated for 24/7 use. Similar to the G4 system, Inogen G5 comes with access to the Inogen Connect app. To learn more about my experience with this device, check out my Inogen One G5 review.

Rather than providing pulses of oxygen like Inogen’s other concentrators, Inogen at Home provides 5 liters of continuous oxygen. The ultra-quiet system is one of the most energy-efficient oxygen concentrators on the market, which can save you up to $300 a year in utility costs.

Most at-home oxygen concentrators weigh about 40 pounds, but Inogen at Home comes in at less than half of that — 18 pounds. It’s designed for stationary use, but many people move their oxygen equipment around their homes. I couldn’t easily move a 40-pound concentrator, but an 18-pound device is much more manageable. With five flow settings, the Inogen at Home system can accommodate changes in your condition, circumstances, or prescription.

Tip: With Inogen, you never have to worry about where your system’s equipment comes from or what credentials its engineers have. All of Inogen’s products are designed and assembled in the United States.

You can purchase an Inogen oxygen therapy system on the company’s website or call its sales line. Buying online is faster, but speaking to a customer care agent on the phone is a great way to get expert input and customize your purchase. Given Inogen’s return policy, you’ll probably want to buy everything during one purchase.

As I reviewed Inogen’s website, I was reminded that supplemental oxygen of any kind requires a prescription from a doctor. Make sure you’ve received a prescription and discussed your needs with your medical provider before beginning your search for a portable oxygen concentrator. Once you place your order, you’ll receive a call from an Inogen specialist, who will record your prescription information.

Since they’re considered durable medical equipment, most of Inogen’s portable oxygen concentrators are covered by Medicare.

A variety of accessories are available to help you carry your Inogen oxygen concentrator with comfort and protection. Inogen also offers replacement items, such as power cords and filters, a la carte. Double batteries can be purchased on their own or as part of a Freedom Package, which is available on the Inogen website.

Specifically tailored to transport your Inogen One G3 or G5, this lightweight cart has two adjustable height levels: 34 inches and 41 inches. The cart fully collapses to less than 18 inches for simple transport or storage. Despite weighing only about 3 pounds, the cart is durable and fares well when rolling over uneven surfaces.

Providing a protective cover for your Inogen machine and a convenient handle and shoulder strap, the carry bag is available for both the G3 and G5 systems. The bag also features a small pocket for items such as ID and credit cards.

Backpacks are ideal for your oxygen concentrator while you’re on the go. Each lightweight backpack has adjustable straps and a main compartment for your Inogen concentrator, along with spaces for your water bottle, extra batteries, and anything else you may need. The G4 and G5 backpacks include a thermoformed shell that provides extra padding and protection for your concentrator during your daily adventures.

A first of its kind, the G4 hip bag includes a strong thermoformed belt, which provides stability and comfort without damaging your oxygen concentrator. There are two pockets for carrying a wallet, cell phone, keys, or other personal items. Although the hip bag doesn’t have space for a jacket, I love that I could keep my concentrator at my side without having to wear a large item on my back. If you deal with hip problems, though, this accessory probably isn’t the best choice.

Double batteries enable their systems to run longer, which gives you more time to enjoy life before you need to stop and recharge your concentrator. With the 13 hours a G5 double battery lasts, a double battery is a must. Keep in mind that your flow setting will also affect how long your battery lasts.

Did you know: Taken from the phrase “innovative oxygen,” the name Inogen expresses the company’s approach to product development.

Setting up Your Inogen System

Setup for Inogen concentrators is easy and requires no additional tools or expertise. Inogen provides step-by-step setup videos for each of its systems in the Support section of its website. The following instructions are for the G3 system, but setup for the other concentrators is very similar.

Inogen offers a 30-day trial period after the purchase of an oxygen therapy system. If you are dissatisfied with your product, you may return it for a refund after you have completed an equipment return form (available on Inogen’s website) and sent back your equipment. You can also complete most of your return information over the phone.

Inogen will charge you a $99 handling fee if you choose to return your system, which seems rather steep. Due to Inogen’s detailed reprocessing system, it may take up to 10 business days after your product reaches the company to receive your refund. Unlike Inogen systems, accessories and parts are not eligible for return unless they were purchased and returned with an eligible Inogen One system.

All Inogen machines include a three-year warranty. If you purchase one of the company’s Freedom Packages, it becomes a lifetime warranty. These nontransferable warranties guarantee that, within the agreed period of coverage, your product is warranted to be free of defects “in materials and workmanship under normal use and service.”

Inogen’s portable oxygen concentrators allow oxygen therapy patients to enjoy active and on-the-go lifestyles that were, until recent years, impeded by their need for constant oxygen and heavy refill tanks they had to lug around.

I’m more of a discount kind of gal, and, unless you have Medicare or insurance to cover your oxygen therapy, Inogen’s systems and accessories cost a pretty penny. I like that Inogen’s systems provide freedom once thought to be impossible for patients on supplemental oxygen. Inogen may not be the financially smart answer for oxygen therapy if you rarely leave your home, but if you want to keep living life to its fullest inside, outside, and around your home, the company’s portable oxygen concentrators are a solid solution.