The phrase “fake news” has become a familiar refrain these days, and it’s become somewhat of a defense mechanism. People use it all over the world to say that something they disagree with isn’t “real.” Based on our diverse backgrounds and the variety in how we consume media, everyone now has their own perspective on what is true and what is false.

Polarizing topics, such as race relations, gun safety, and discrimination, dominate the news cycle with pundits and contributors sharing a variety of stances – some true, some false. No matter the validity of the claims, many people refuse to communicate openly about these issues and remain rigid in their stances.

To see which beliefs Americans trust or discredit, we conducted a survey of over 1,000 adults and polled them about various current controversial topics such as climate change and Russian election interference. Which topics found the most people on the same page? How many subscribed to untrue stances rooted in rumor or conspiracy? Read on to see our findings.

Americans Actually Agree on Some Topics

Several statements presented to survey respondents were rooted in some element of reality. However, some of the current controversial issues were nested in topics that can’t be confirmed by authoritative sources. Some of these statements were even outright untrue.

So how did Americans view the topics raised? 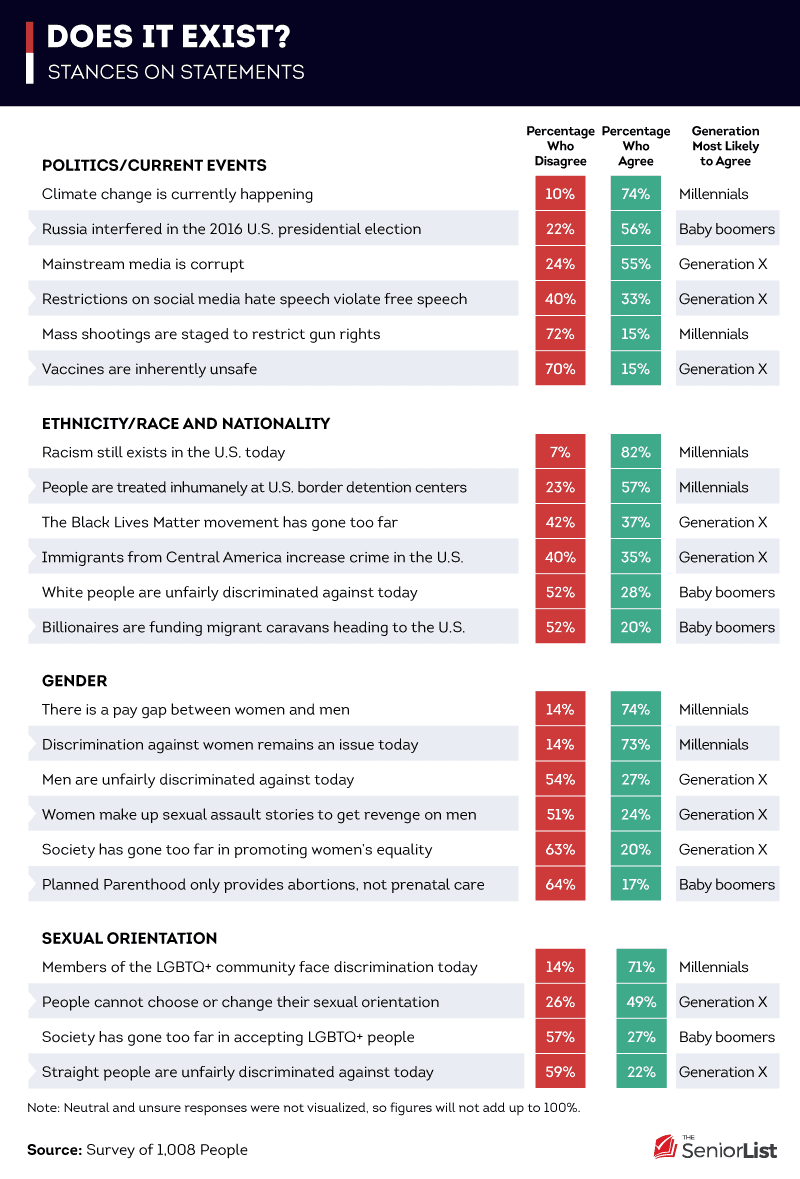 Eighty-two percent of Americans agreed that ethnic prejudice is a very real issue in the U.S., making it the most widely agreed with stance on our list. When it came to more controversial topics, many respondents were likely to support causes that a simple Google search could reveal as untrue.

These days, one tweet can start a rumor that spirals out of control. This is exactly what led to an untrue link that was formed between billionaire George Soros funding a Honduran migrant caravan being taken as fact and shared by influential figures on social media. Over 20% of respondents believed this statement, one that can be easily disputed.

Additionally, nearly 15% of respondents believed that vaccines are inherently unsafe, meaning that they always have been and will be unsuitable for use. Falsehoods about vaccines are leading many to side against the medical community, which advises that vaccinations are safe. Internet chat rooms and “anti-vax” blogs not only accept them but also have promoted these theories as fact.

What about someone who stays on top of the news each day? How do their views vary based on people who don’t read the news? We found that the rate of news consumption directly impacted opinions.

Someone who only consumes the news once per week was more likely to believe untrue stances based on conspiracy theories, such as vaccinations being inherently unsafe (26%) and Planned Parenthood solely providing abortions (27%) – the latter being debunked, as abortions only make up 3.4% of Planned Parenthood’s total services. On the other hand, those who consumed news multiple times a day were likely to believe in racism (85%), climate change (77%), and Russian election interference (65%).

A good rule of thumb when you hear an outlandish statement is to evaluate it and fact-check it with an unbiased or low-bias source. Often, if something sounds too wild to be true, it likely is.

Company We Keep Influences Our Stances

Humans are creatures of habit and can be reflections of the company they keep. It’s natural to feel comfortable around people with the same background: A wide array of shared experiences and familiar personalities can give us comfort and allow us to relate to one another.

However, when those similarities influence our views on various topics or indirectly blind us to issues facing other demographics, we risk living in an “echo chamber” – when a similar group only discusses issues with each other and allows their stances to be strengthened, while other ideas are not recognized or considered. 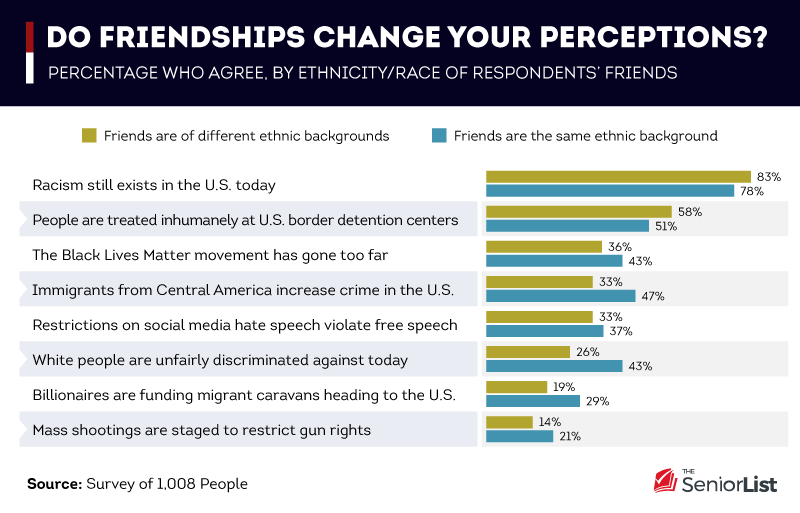 The most divisive issue when comparing diverse and similar ethnic friend groups came from this statement: “White people are unfairly discriminated against today.” There is a propensity among some white Americans to view diversity as a threat to their own stability and well-being.

A study published in 2018 by The Russell Sage Foundation Journal of the Social Sciences found that merely mentioning the increasing minority population in America to white respondents was able to “elicit identity-relevant concerns, including perceived vulnerability to racial discrimination.” 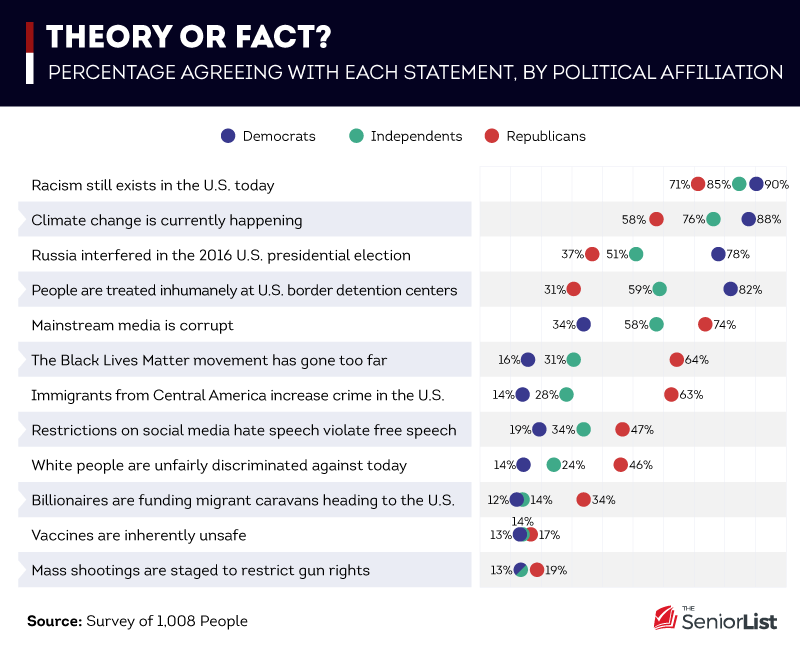 One thing our results can say is that Americans appear more polarized than ever.

The stance with the most divisive spread in our survey involved the controversial immigrant detention centers currently housing a record 54,000 people as of 2019. Eighty-two percent of Democrats, but only 31% of Republicans, supported the claim that people are treated inhumanely in these facilities.

There are many questions regarding the state of these installations, including accounts and evidence of dramatic overcrowding, unsanitary conditions, and family separation. These differences in opinion come directly from the different ways people learn about current events and the political figures they follow. This speaks to a larger issue on how people across party lines lack understanding into each other’s ideologies and can’t relate to the other’s concerns.

The public’s confusion over issues like familial separation likely comes from the concealed nature of these topics, especially in the media. Until recently, when videos of the conditions were exposed, firsthand reports of human rights violations were the only information the outside world had on these centers.

Most people agree that discrimination against women and the LGBTQ+ community exists today. At least half of respondents across genders and political affiliations concurred on these points.

Two-thirds of men and Republicans stood on the side of commonly accepted data showing women make just 80 cents for every dollar that a man earns, adding up to nearly $10,000 of lost wages annually. These figures are compounded when race and location are taken into account.

The popularity of some of these stances ends up hurting victims and marginalized groups. One in 5 women believed that other women make up sexual assault stories to get revenge on men, which can cast a shadow of doubt on victims who come forward. False reporting is generally uncommon, accounting for just 2% to 10% of all sexual assault cases.

Republicans were conflicted on LGBTQ+ acceptance. While 47% agreed that society has gone “too far” in accepting LGBTQ+ people, 56% contended discrimination of the LGBTQ+ community remained a problem. Opinions can be fluid, especially when faced with new information. As the relevance of some of these stances changes, it’s important to consider how the media’s dialogue can impact the national narrative surrounding each issue.

Across all issues, we saw a trend: An overwhelming number of Republicans (and some Independents) believed the media exaggerates most issues.

Inversely, Democrats believed most issues are vastly minimized. The repetitive programming on networks and websites and the emphasis of the media to pump the news cycle with the same stories can create burnout, causing many to question the overall quality of the news. 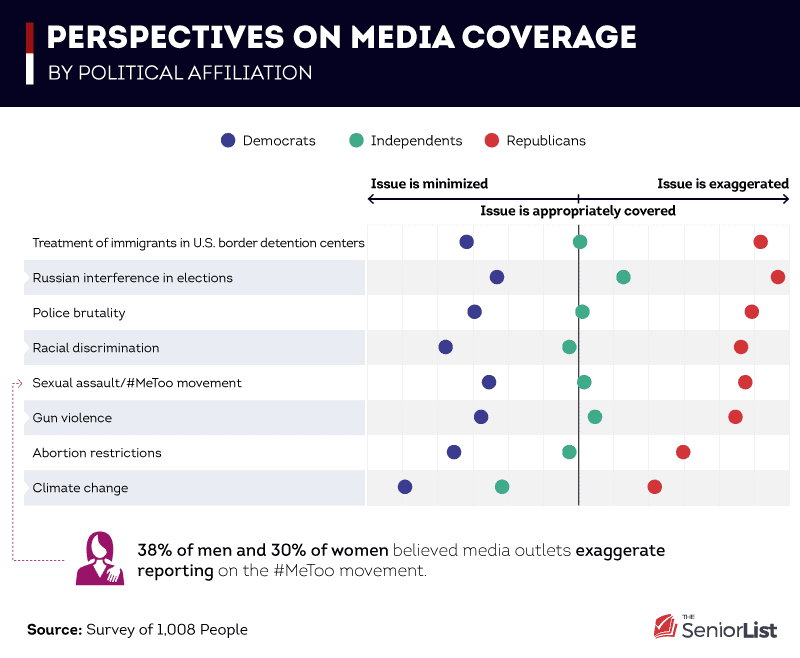 However, someone’s perception of the news cycle may vary based on a lack of connection or experience with a particular subject. This may explain why 38% of men believed media outlets exaggerate reporting on sexual assault or the #MeToo movement, compared to 30% of women.

Women may have more of an innate understanding and sensitivity of the issues facing other women, possibly giving them more of an awareness of how the news may create a dialogue around #MeToo and sexual assault. After seeing victims come forward in a very public way in the height of the #MeToo movement, reported sexual assaults are on the rise.

Republicans were much more likely than Democrats to think the media overblow issues on a large scale, indicating a more conservative trend of questioning the mainstream media.

With the lines between reality and fiction becoming more blurred every day, and as pundits twist narratives that support their stories, it becomes crucial to responsibly consume the news and respectfully discuss the issues facing our communities.

When it comes to holding opinions and stances on political, economic, and social issues, it’s important to be educated on the issues, so you can have a strong foundation of knowledge on the subject matter.

Here are some tips to ensure the best quality of news and the validity of your sources:

These days, it’s hard to trust anything, but since we live in the information age, we must do our due diligence to root our beliefs in fact. Often, extremely sensational headlines can manipulate a reasonable stance into a false narrative that can spread like wildfire.

When talking to friends, family, and strangers about these topics, always be respectful, especially if they do not agree with you. Hold each other’s beliefs with deep reverence, as long as someone is not intentionally cruel or hateful. It’s also important to know when to back down and disengage if someone is becoming overly vehement.

For this study, we surveyed 1,008 people using an online survey. 52.3% of our participants were women, and 47.2% were men. Less than 1% were nonbinary or did not specify a gender. Based on the sample size compared to the national population, the margin of error for women was 6% and 4% for men.

For each of the statements in this study, participants were instructed to indicate their level of agreement on a 5-point scale ranging from strongly disagree to strongly agree, and there was also an option to select “unsure” for each statement. For most visualizations, responses of “strongly agree” and “agree” were grouped.

There are many current events and controversies we did not address in this study. This study was based on self-reported data, and the results, therefore, may be influenced by issues such as exaggeration and telescoping.

Next time you’re engaged in a rousing discussion about political issues, make sure to follow our tips, and be aware and sensitive toward the various perspectives we all have! To help us share these findings, feel free to share this content with your friends! Just assure it’s for noncommercial use, and you cite us when mentioning this data, of course.