Social media is no longer the exclusive domain of the young: Older Americans are now flocking to Facebook, forming the platform’s fastest-growing user group. And as social networks play an ever-more powerful role in the nation’s political ecosystem, seniors’ Facebook activity will surely influence and reflect the country’s electoral future.

Older voters have long possessed outsized power at the ballot box, voting at higher rates than younger citizens. Now, as baby boomers embrace Facebook, what do their preferences reveal about their political leanings?

To find out, we studied information from Facebook Audience Insights, a tool designed to study the interests and activity of specific groups of users. Our findings highlight geographical differences in seniors’ Facebook activity and the political convictions of each state’s older residents. Ready to learn what Facebook reveals about older Americans’ political views? Keep reading.

Seniors on Social: State by State 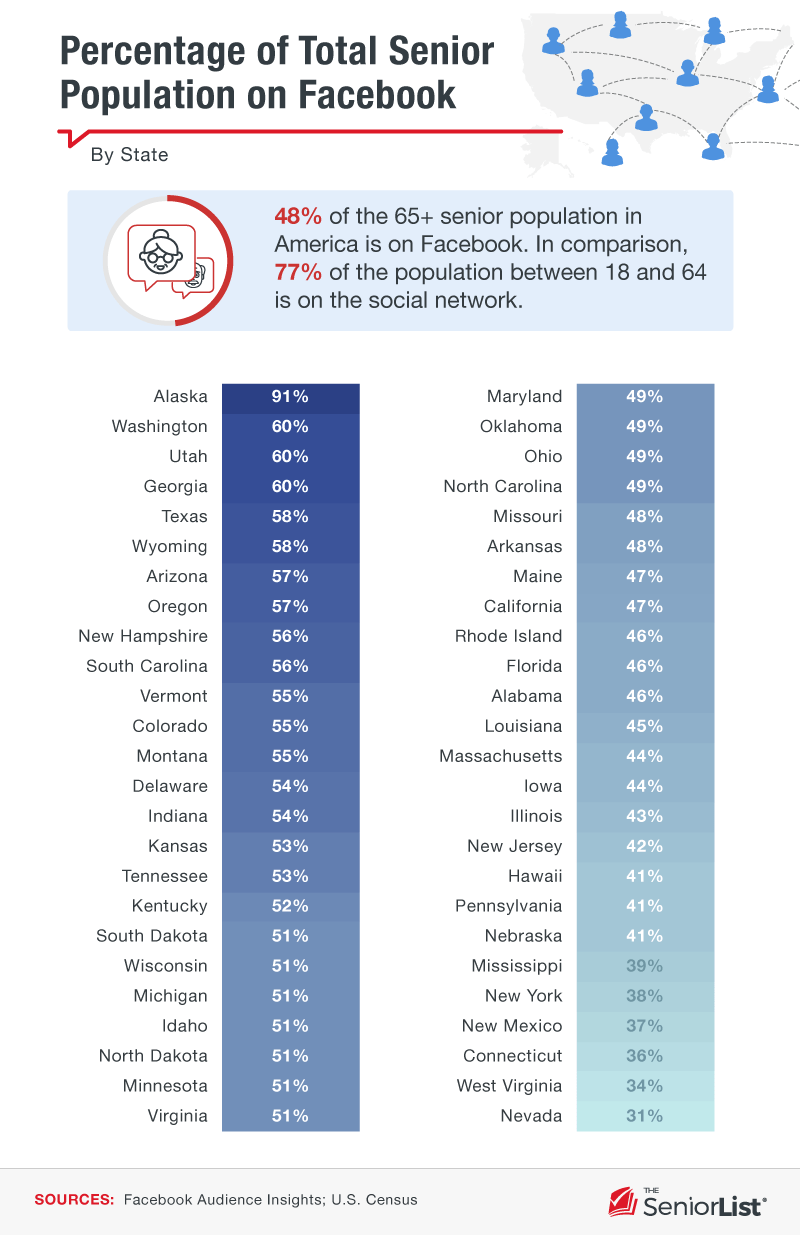 Nationwide, slightly less than half of seniors currently had Facebook accounts. This statistic denotes rapid recent growth: Just a decade ago, fewer than 1 in 10 Americans aged 65 and older were on any social media platform. Yet, this trend in adoption has been uneven, with older residents of certain states embracing Facebook more enthusiastically.

In Alaska, 91% of seniors had a Facebook account, according to our calculations. Given that many remote areas of Alaska don’t have consistent internet, this finding may seem surprising – although, perhaps, social media can be a valuable antidote to rural isolation. Indeed, other rural places such as Utah and Wyoming ranked among the states in which seniors used Facebook most often.

Conversely, some states had just a small portion of seniors on Facebook. In Nevada, for example, fewer than 1 in 3 residents aged 65 and older had an account on the platform. In a swing state with a rapidly growing senior population, this finding is especially interesting. If office seekers hope to persuade older voters, our findings suggest that Facebook may not be the most effective means to do so. 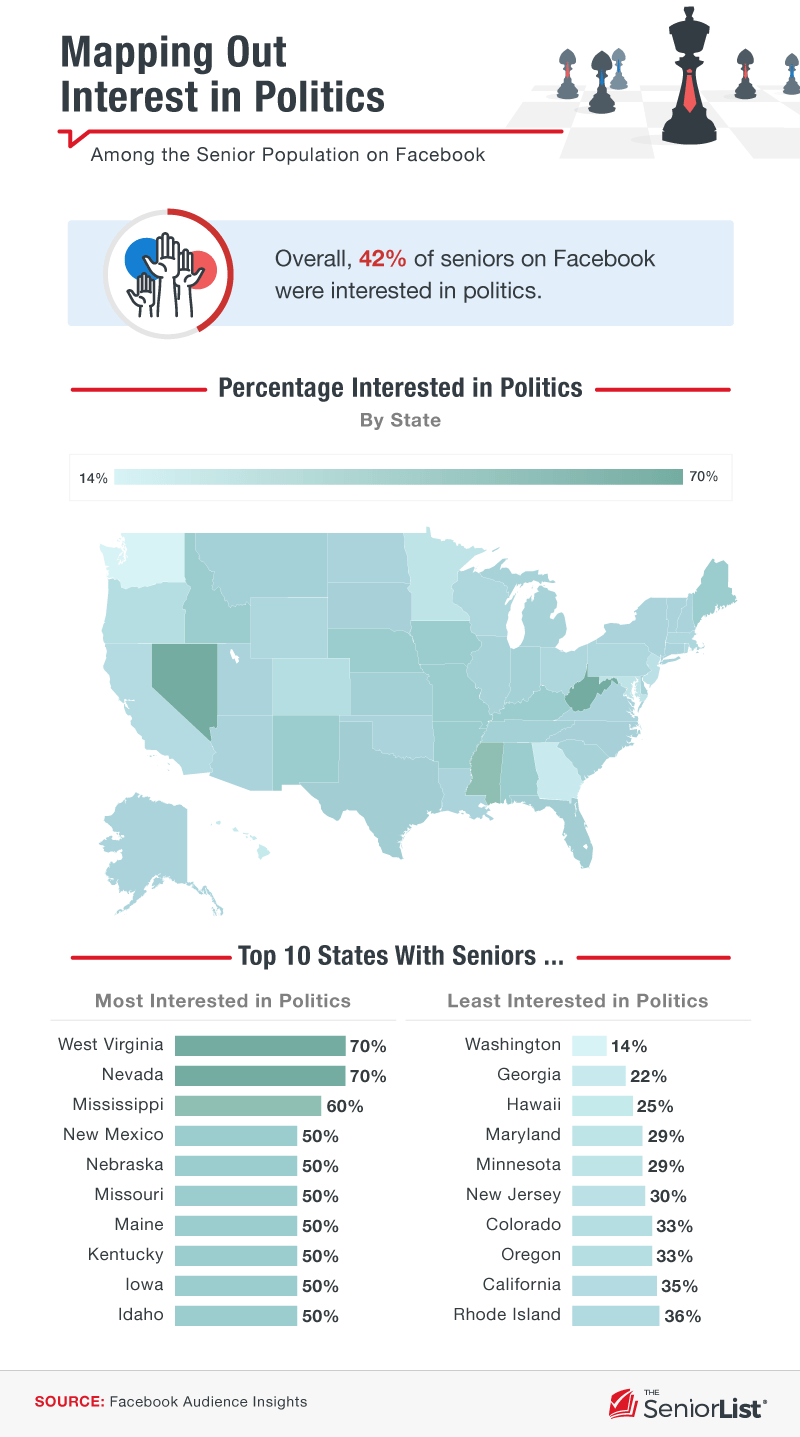 In recent years, seniors’ political social media activity has attracted increased scrutiny. One landmark study, for example, found that older users were especially likely to share fake news during the presidential campaign of 2016. Yet, our findings suggest that just 42% of seniors demonstrated an interest in politics on Facebook. Around the country, are there particular hotbeds where older Americans are more vocal about their views?

Interestingly, the two states with the lowest percentages of seniors using Facebook had the highest rates of political engagement. In West Virginia and Nevada, 7 in 10 Facebook users aged 65 and older were interested in politics. Perhaps in these places, where Facebook isn’t widely used by seniors, political convictions bring people to the platform.

One might imagine that political interest would be most intense in swing states, where ideological differences are common and frequently debated. But even some battlegrounds, such as Colorado, had a small percentage of senior Facebook users interested in politics. And in Mississippi, where conservative views are dominant, 60% of senior Facebook users said they were interested in politics. Accordingly, we can conclude that political diversity doesn’t necessarily increase senior interest – but consensus doesn’t exactly discourage it either.

Political Affiliation Among the Older Population

It’s a truism of American politics: Older voters tend to side with conservative candidates. But recent data indicates that this dynamic is slowly shifting, with more seniors adopting progressive views. Just how often do older residents actually lean right?

Our findings suggest that conservative views are far more common than liberal ones among older Americans on Facebook. Twenty-eight percent of seniors on the platform espoused conservative leanings; in strongholds such as West Virginia and Mississippi, a majority of seniors were conservative.

Liberal views were more muted among seniors: Even in progressive capitals such as New York and California, only about a quarter of older Facebook users leaned liberal. In most states, however, the majority of seniors’ political affiliations were unclear based on their Facebook activity. It’s unlikely that older Americans are simply apathetic because seniors have relatively high voter turnout rates. Perhaps like so many Americans, older voters feel fatigued by the political content they see online and refuse to overtly take part in these ideological clashes.

In an era where Americans’ trust in media has hit rock bottom, senior Facebook users remained interested in a few cable networks – especially when compared to younger users. For example, 35% of senior Facebook users demonstrated an interest in CNN; just 23% of younger users did the same. That finding has intriguing political implications, given how conservatives have targeted the network in recent years.

Fox News, widely viewed as a conservative alternative to mainstream networks, was also more popular among seniors than younger users. This finding suggests that older Facebook users are more likely to feel attached to their news sources, no matter where they stand on the ideological spectrum.

Additionally, certain political issues resonated with senior Facebook users, including medicine and Social Security. In this regard, our findings echo other research indicating that older voters are deeply concerned about affording health care and prescriptions, as well as making ends meet during retirement.

As far as specific politicians, two marquee names each interested 35% of senior Facebook users. One was President Donald Trump, whose presidency has continually supplied attention-grabbing controversies sure to interest any age group. The other was Joe Biden, whose support among older voters is a distinctive feature of his base.

Senior Sway: Online and at the Ballot Box

As the results of this project make undeniably clear, America’s seniors are not a monolith. Across state lines, levels of political engagement differ dramatically – and ideological divides run deep. Additionally, a majority of seniors are more moderate or private about their political beliefs, demonstrating no overt leanings toward either party on Facebook. As future elections unfold, however, can this pattern of outward neutrality last?

Our findings do present some potential areas of common ground among seniors and even suggest the possibility of bipartisan efforts around key issues. For example, fully half of seniors considered medicine a top issue – and it’s no coincidence that prescription drug pricing is a rare issue where interparty collaboration has proved possible. Could seniors come together, using their voting power to encourage more bipartisan efforts on issues that matter to them?

Only time will tell if senior voters can collectively influence progress. Yet, at least one thing seems certain: Whichever political views older Americans decide to express, many of them will do so on Facebook.

MethodologyTo conduct this study, we collected demographic information from the Facebook Audience Insights tool from Sept. 17 through Sept. 20, 2019.

We defined seniors in this study as people who were age 65 and older.

To calculate the percentage of seniors who had a Facebook in each state, we divided Facebook’s low-end estimate of the number of seniors on the platform by the senior population of that state according to the U.S. census.

Facebook allows users to see an estimated number of Facebook users who are interested in a specific topic, whether it is politics, a political party, or a specific subject like Social Security. Facebook Audience Insights gauges user interest in a particular subject matter on a day-to-day basis. Interests in each state may have shifted over the course of the four days we pulled data for this study.

Fair Use StatementGiven the importance of older voters in upcoming elections, your friends, family, and followers may find these results compelling. Feel free to share our work with them, but please make sure that you do so for noncommercial purposes. Additionally, please link back to this page so that your readers can dive into our full research.