Three of four seniors age 75+ believe they do not currently need a device; Caregivers disagree

The worldwide market for medical devices is expected to rise by nearly half over just the next five years, expanding from $6.5 billion today to $9.6 billion by 2025. And it’s little wonder why. The World Health Organization estimates that by 2050, 16 percent of the world’s population will be 65 or older, which is double today’s ratio of older adults (8 percent).

Technology like fall detection, location tracing, call assistance and care management have helped these devices grow far beyond the oft-parodied, “Help, I’ve fallen and I can’t get up,” commercial that became popular in the early 1990s. Today’s medical alert devices can come in the form of a wearable pendant, wristbands, watches, fixed standalone units and more, and as the features baked into them become even more sophisticated, the utility of medical alert systems becomes even more critical.

It’s estimated that more than 3 million American seniors own a medical alert device, and as more people age into the group, competition for customers and drive for innovation could further expand the utility of these devices. In addition, as COVID-19 reduces in-person contact between seniors and their caregivers or loved ones, there is an even stronger case for serious consideration.

To get a better sense of how and why people use medical alert devices, we surveyed more than 600 Americans aged 75 and over on a range of subjects related to these technologies. We also asked more than 500 caregivers for adults ages 70 and over about senior safety products.

The most common type of medical alert device used by seniors was a wearable pendant, with almost two-thirds of device users employing that type of device. But our research also indicates that many medical alert customers are using more than one type of device, as another 35 percent said they used wristband or watch-style devices. 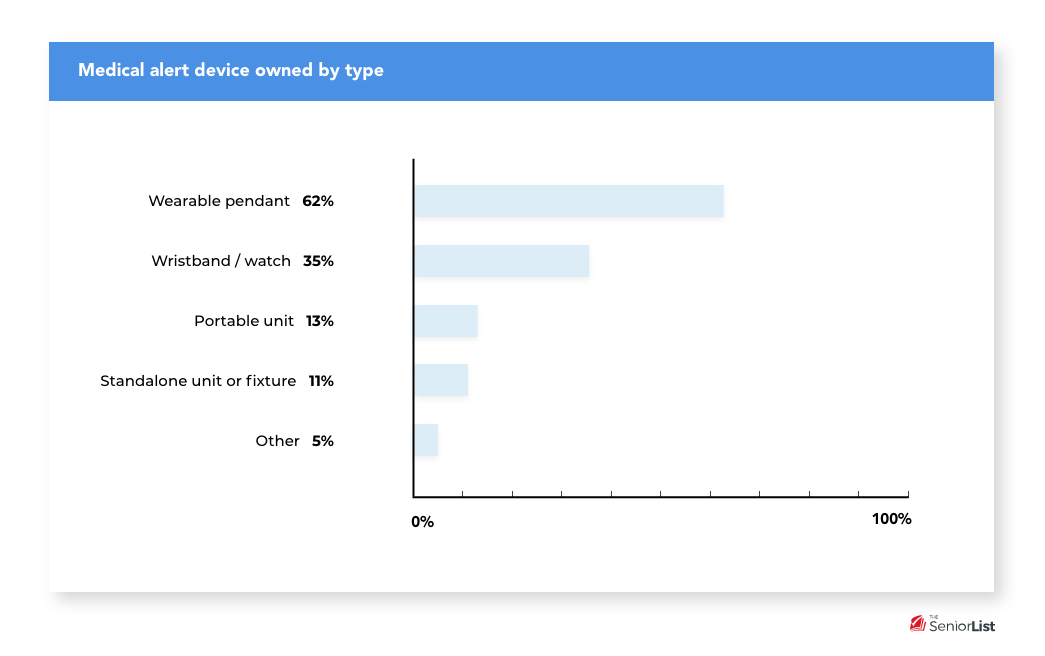 While the number of respondents who use medical alert devices was relatively evenly split between women and men (about 53 percent to 47 percent), women are far more likely than men to use pendant-style devices.

More than two in three owners of wearable medical alert devices have them on at least every day (with 40 percent having them on all the time). However, nearly one in three do not wear these devices regularly or as suggested.

Very few seniors, just eight percent, believe they for sure need a medical alert device. A large portion are unsure and the great majority believe they do not. 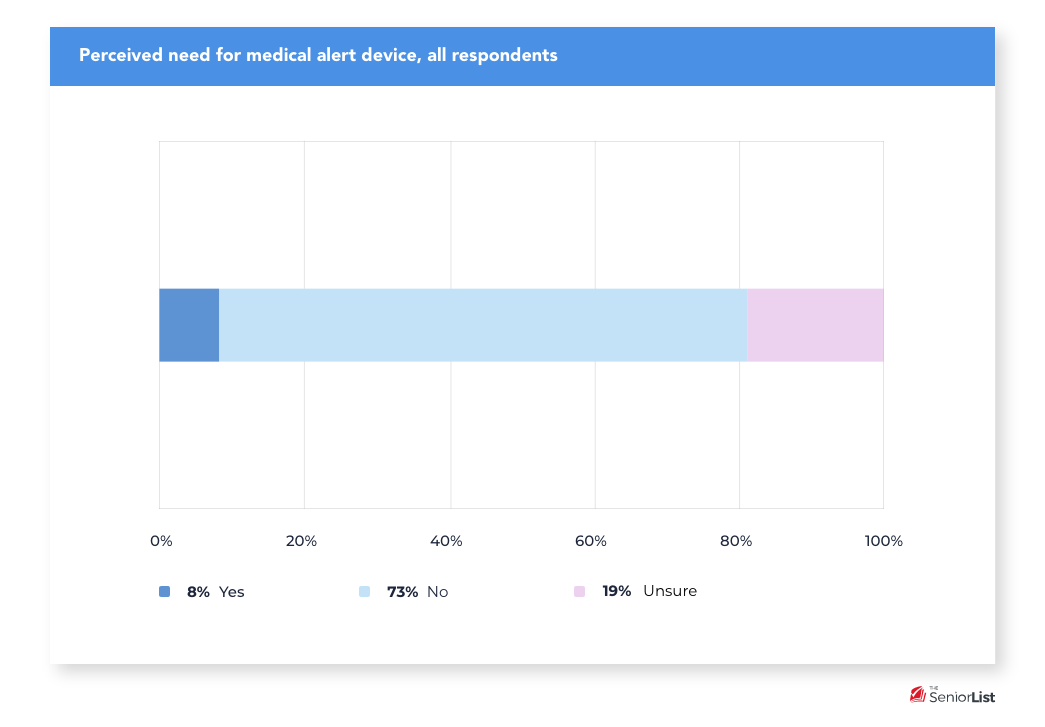 Compare this to the perceptions of caregivers, who recommend a medical alert device for care recipients of ages 70 to 80 more than any other safety product, and just behind walk-in tubs for seniors ages 80 and up. It should be noted that this is not an apples-to-apples comparison since not all of the seniors surveyed necessarily have a caregiver.

Older adults who live with at least one other person are the least likely to own a medical alert device, with just eight percent of this group adopting one or more devices. Those residing in senior living communities are the group most likely to own a device, which is unsurprising considering that many senior living communities provide wearables or fixed units to all residents.

Half of the medical device users in our survey bought their devices themselves, meaning that the other half use devices purchased for them or that came with their senior living apartment or room. Combined with the above analysis, it’s clear that having the choice made for them greatly increases the chances of seniors owning medical alert devices.

Similarly, the presence of paid caregivers, including staff of senior living communities, dramatically increases the rate of device ownership. Only 10 percent of seniors who don’t have a caregiver own a medical alert device.

While this largely tracks with data from our recent State of Caregiving and Elder Safety study, it’s also important to note that almost half of the caregivers in that study who live with the elders for whom they provide care said that the place the elder lives could be made safer, and for many families, that likely will mean purchasing one or more types of medical alert devices.

Roughly one-quarter of Americans 65 and older experience a fall in a typical year, and falls are historically the leading cause of injury death among older adults. and the risk of fall is one of the strongest driving factors not only in the features these devices offer but, according to our findings, adoption of medical alert devices by older adults.

Let’s take a look at what our survey indicated are the biggest reasons why people don’t use these devices:

The medical alert device industry has come a long way from the days of cheap-looking ads and clunky, old-fashioned devices. Brands like Bay Alarm Medical, Medical Guardian, and Lively have created sleek and technological devices. Today’s medical alert devices can live within an ecosystem of connected devices to ensure that as people age in place, they’re doing so safely. There’s no doubt that the alert device market will continue to mature right alongside the continuing aging of the U.S.

The Senior List’s research team actively studies aging in place. We publish independent content covering social, economic, political, and geographic topics for seniors. Data for this report comes from surveys conducted in May and June 2020. First, we asked more than 600 adults age 75 and up about their awareness, usage, and perception of medical alert devices. Second, we asked more than 500 adults that provide care to an adult age 70 and over detailed questions about safety products. We also used data from the World Health Organization and Washington Post.