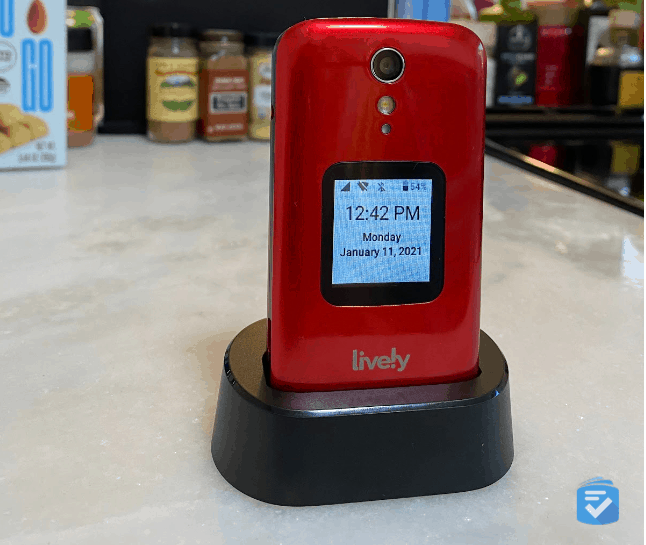 With tactile buttons, a long battery life, and built-in safety features, the Jitterbug Flip2 is one of our favorite cell phones for seniors.

Share: copied!
The Senior List is compensated when you click on the provider links listed on this page. This compensation does not impact our ratings or reviews.
Pros & Cons Purchasing Setup Using The Phone Health and Safety Extras Recap

With each year, it feels as though cell phones get more and more advanced, packing in features like touch screens, face detection, and cameras that can put a DSLR to shame. While I appreciate having the power of a computer in my pocket, I recognize that not everyone needs this. That’s where Lively comes in.

Since 2005, Lively has been bridging the gap between cell phones and older adults. In this review, I’ll be taking a closer look at one of their basic models, the Jitterbug Flip2. This phone, while simplistic in design, packs in some advanced care features that make it perfect for the older set. But is it the right phone for you or your loved one? Let’s dive in.

Pro Tip:Looking for a different device? Then check out my picks for this year’s best phones for seniors and senior cell phone plans.

What I Liked About My Jitterbug Flip2

The Jitterbug Flip2 can be purchased over the phone, through Lively’s website, or at many brick and mortar stores such as Best Buy and Walgreens. I decided to purchase my phone directly from Lively’s website. There, I was able to choose the color of my phone (either graphite or red), select my service plans, and check out some additional features.

Once I added my Jitterbug Flip2 to my cart, I was asked if I would like to keep my existing phone number. Although they couldn’t guarantee that I’d be able to keep my number, I was happy to find that, in my case, I could. After this, I had to select my service plan. Currently, Lively uses an à la carte model when it comes to minutes and texts, meaning any amount of minutes can be paired with any amount of text messages. Here is an overview of the options.

For the purposes of this review, I decided to sign up for the unlimited minutes and texts plan so that I could get the most out of my phone. You should also keep in mind that Lively has some pretty steep overage fees. Unlike Consumer Cellular, who will automatically upgrade your service plan in the event of an overage, Lively will charge you $0.35 per minute, which could definitely add up quickly.

There is no extra charge for calls made anywhere in the continental U.S. or Canada. With that said, Lively will charge $0.20 per minute for calls made to Puerto Rico, Mexico, and the U.S. Virgin Islands.

When all was said and done, my total startup cost for both my Jitterbug Flip2 ($99.99) and my unlimited plan ($19.99) came to $119.98, not too bad, especially considering how expensive some smartphones can be.

Be Careful: If you select a plan with no texting allowance, then each text sent or received will cost $0.10.

Setting Up My Jitterbug Flip2

Once I purchased my Jitterbug Flip2 and my service plan, it took less than one week for my phone to arrive on my doorstep. Inside my box, I found my phone, a wall charger, a charging cradle, and an instruction manual that guided me through the quick and simple setup process.

First I plugged my phone into the charger. Then I plugged that into a wall outlet and in a matter of two hours, my phone was fully charged and ready for action. I turned on my Jitterbug Flip2, dialed the service number listed in the manual, and confirmed my information. Just like that, my phone was up and running.

I have to say, when I powered up my Jitterbug Flip2, I almost felt like I’d gone through a time warp. Unlike my smartphone, which constantly barrages me with email and social media notifications, the Jitterbug Flip2 is comparably modest. The home screen presented me with the time, date, and a colorful background, nothing more. Gradually, however, I came to see the beauty of this simplicity. Especially for those of us looking for a phone, rather than a pocket-sized computer, the Jitterbug Flip2 is just what the doctor ordered.

In the many test calls I made, I was impressed by the clarity and volume of the audio, which could be made even louder by using the speakerphone option. Considering how many older adults suffer from hearing loss, a phone’s audio quality should be top-notch, and the Jitterbug Flip2 does not disappoint. The Jitterbug Flip2 is also rated M4/T4 in terms of hearing aid compatibility.

When it came to sending text messages, I was pleased with both the size of the buttons and their spacing, which made it a breeze to accurately type out letters. Additionally, everything on my Jitterbug Flip2’s screen was rendered in a large 32 point font, making it easy to read. The phone’s buttons are also backlit, making it possible to type in a setting with either low or no light.

The Jitterbug Flip2’s camera, I will say, is nothing to write home about. While rated at eight megapixels, the photos I took were not of a high enough resolution to warrant printing or sharing online. Still, the camera does the job, and for practical purposes, such as photographing a recipe, it could certainly come in handy.

I also appreciated the dedicated 5Star button on the bottom of my Jitterbug Flip2. When pressed, this button quickly connected me to one of Lively’s monitoring agents who would have been able to contact emergency services if necessary. Using GPS, the agent would be able to track my location as well. Although I encountered no emergencies during my testing period, I could see this coming in handy for any older adult. Without the hassle of dialing a number or navigating menus, I could press the button and immediately be connected with someone who could send help, if necessary.

My Jitterbug Flip2 also had some additional safety features, which I’ll get into below.

In addition to minutes and texts, Lively also offers what they call health and safety packages, services geared towards older adults looking to monitor their health and maintain an additional level of protection.

With all that said, I feel the need to clarify that Lively’s Health and Safety Packages are not quite an adequate substitute for a medical alert device, many of which are waterproof, can be worn around the neck, and feature automatic fall detection. With falls being the main source of fatal injury to older adults, I think of fall detection as an essential feature of any bonafide medical alert system. If you’re looking for a full-fledged system such as this, check out my rundown of the best medical alert systems with fall detection.

For an overview of Lively’s Health and Safety Packages and their costs, check out the chart below.

FYI: The Urgent Care feature, which allows you 24/7 access to nurses and doctors, can also be purchased on its own for $4 per month.

In addition to the phone and service options, Lively also offers additional hardware options for the Jitterbug Flip2. Here’s a closer look at these handy add-ons.

To learn more about our favorite phones and plans for seniors, be sure to check out our helpful guides: