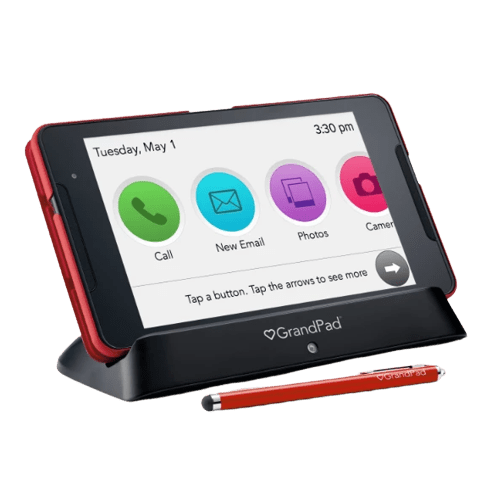 Share: copied!
The Senior List is compensated when you click on the provider links listed on this page. This compensation does not impact our ratings or reviews.
Pros and Cons Design Features GrandPad vs. Smartphones Costs Bottom Line

While smartphones and tablets have done much to facilitate communication––through both text and video––these devices are often difficult to use, particularly for seniors who are new to the technology. That’s where the GrandPad comes into play.

By simplifying the features of a traditional tablet, the GrandPad provides an ideal way for seniors to stay in touch with their loved ones. If you don’t mind the costly subscription fee of $40 per month, then the GrandPad might be the perfect alternative to a smartphone or conventional tablet.

FYI: To learn more about our favorite tablets, read our guide to the best tablets for seniors.

The GrandPad tablet has a user-friendly interface with a high-definition display. Buttons displaying apps are large so that users can view everything easily. When you want to use an app, you simply touch the app you want to use on the tablet screen.

Front and rear cameras make video calls possible, and the GrandPad’s clear and enhanced sound, from built-in speakers on each side, allows you to enjoy calls and music without holding a receiver close to your ear. At 8 inches high and 5 inches across, it’s the perfect size to rest in your hands, and it’s much easier to see and work on than a smartphone. Plus, at less than a pound (12.5 ounces), the GrandPad is comfortable to hold and carry around.

Upkeep of the GrandPad is easy. There’s no need to worry about draining the battery, as it automatically puts itself in sleep mode when the smart case is closed. There’s not even an on/off button. When the battery does run low after one to three full days, you set it down on the wireless charging cradle; it will reach a full charge after a few hours.

The GrandPad can make audio calls, send emails, and send recorded messages, but we were most excited to try the video calling feature. In our experience, this feature worked pretty well, with calls coming in loud and clear, with high-quality video. Even when these calls were conducted over 4G LTE (as opposed to Wi-Fi), we had a similarly seamless experience.

Another feature we appreciated was the auto-answer option. By turning this feature on, incoming calls will start after a few rings, which would come in handy for someone who might have trouble answering on their own.

Another useful feature of the GrandPad is the photo album. Not only does this app store photos taken with the GrandPad itself, but it also stores photos added by loved ones. Using the GrandPad app, they can upload photos to a shared cloud, and they’ll be immediately viewable on the GrandPad.

Both the front and rear cameras on the GrandPad are rated 5 MP. To give you a comparison, the iPhone 13 has 12 MP, and the latest iPhone has 48 MP. Your loved one may be able to see a crisp, clear image of you through their GrandPad, but keep your expectations low for the quality of image you’ll see.

While these cameras can perform well with video, photos are a different story.

Browsing the internet was easy, and pages loaded quickly, at least when we were connected to a Wi-Fi network. When I was on a 4G LTE network outside of the house, the connection was a bit spotty. The included internet app makes it easy to type in the names of websites and click and scroll.

As a huge music buff, I was thrilled about the 30-million-song database we could search for songs to add to our GrandPad’s music app. However, I was frustrated that the library initially available on the tablet was very slim, and I could not access any other streaming services, like Spotify or Amazon Music.

Both the GrandPad and a conventional smartphone feature a variety of communication and entertainment features; however, the two cater to different skill sets.

When purchased from Consumer Cellular, the GrandPad costs $149 and $40 per month for the required subscription.

Smartphones, however, will cost you either about this much or significantly more. On the pricier end of things, the newest iPhone will cost you well over $1,000, and an accompanying cellular plan will likely cost $50 per month, depending on your provider. On the cheaper end of the spectrum, you might purchase the Jitterbug Smart3, which costs $149 as well and can be paired with a service plan for about $30 per month.

In terms of cost, the GrandPad will cost you roughly the same amount as a smartphone, unless you splurge on a cutting-edge device.

The GrandPad's large HD screen allows seniors to look closer at text or images that may be difficult to process on a smaller smartphone screen. On the screen, large, color-coded icons reduce confusion and minimize choices for seniors with minor to moderate visual impairment. Like with a smartphone, seniors navigate the GrandPad via its touchscreen, and the option to zoom in to the text makes browsing the web easier than on a tiny smartphone screen.

Overall, due to its large size and simplified design, the GrandPad is definitely easier to use than a smartphone.

While the number of apps you can add to your smartphone is essentially limitless, the GrandPad allows only 16 apps. Those apps can be added or removed from the GrandPad based on the user's preferences.

While a small percentage of users will likely prefer a smartphone with infinite app choices, having fewer apps prevents one from becoming overwhelmed by choices.

When purchased from Consumer Cellular, the GrandPad will cost you $149 for the device and $40 per month for your subscription. This monthly charge covers the cost of service on your GrandPad, much like a cellphone plan.

Consumer Cellular also offers financing plans on the GrandPad starting at as little as $5 per month.

If the senior in your life isn't tech savvy, but you still want to help them avoid isolation and keep in touch with loved ones, a GrandPad is a fantastic resource. While it lacks specific technology capabilities like the option to stream audiobooks and interact with voice assistants like Alexa and Siri, the GrandPad provides a convenient way for your loved ones to stay connected.

In the end, the GrandPad provides even the most tech-averse senior with an approachable and senior-centric means of minimizing loneliness and maximizing invaluable connections with those who matter most.

To learn more about our favorite phones and providers for seniors, be sure to check out our helpful guides: