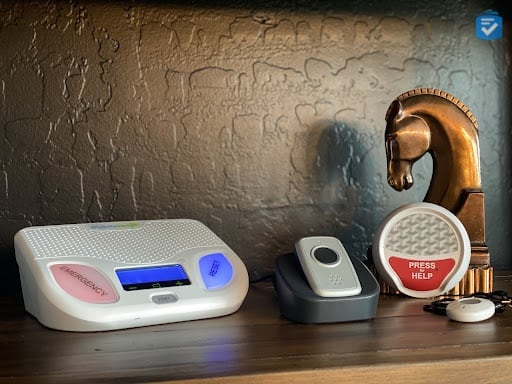 Are you sure MobileHelp is right for you?
See Our Top Picks

Share: copied!
The Senior List is compensated when you click on the provider links listed on this page. This compensation does not impact our ratings or reviews.
By the Numbers Pros & Cons Video Review Systems Overview Using the System Pricing Final Thoughts

4.5 / 5
Are you sure MobileHelp is right for you?
See Our Top Picks

Special Offer: For a limited time, MobileHelp will offer two free months of service and a discount on fall detection when you purchase a bundled system.

As the name implies, MobileHelp offers medical alert systems for use both in the home and away. What’s more, they offer discounted bundled systems that offer protection in any environment.

I recently tested MobileHelp’s Duo system, which includes an in-home system and a mobile medical alert with GPS. For those in need of protection both in and outside the home, this system can certainly do the job.

Pro Tip: If you’re new to in-home medical alerts, take a look at my medical alert system guide to learn about everything related to this technology.

Pros and Cons of MobileHelp

MobileHelp offers seven systems that can protect users both in and out of the home. Here is an overview of each:

FYI: All of MobileHelp’s systems are compatible with fall-detection pendants.

I purchased the MobileHelp Classic system. When it arrived, I opened the box and found the following:

To install my MobileHelp Duo, I plugged the base unit’s power cord into an outlet, turned it on, and held down the test button. After holding the test button for six seconds, it said, “User auto test,” and I was instructed to press the help button on my pendant. The base unit then said, “Test call sent to the emergency response center” and “Thank you for testing your device.” Not too bad! Although I have a landline in my house, I didn’t need to use it since the Duo system relies on AT&T’s cellular network.

To use the pendant, I just had to be within 1,400 feet of the base unit — one of the longest ranges I’ve seen from an at-home unit. It should work for the vast majority of homes, but if you have an extremely large house, MobileHelp also offers cellular options that work everywhere.

After pressing the button, the base unit said, “Call in progress,” and then “Please stand by for operator.” A few seconds later, an emergency operator answered me through the base unit. I told him it was just a test call, but I knew he’d coordinate the appropriate response with emergency responders if it weren’t a test.

To test my fall-detection pendant, I pretended to fall down the stairs by dropping the button from about three feet off the ground. About 20 seconds later, the button beeped and flashed yellow, prompting the base unit to announce, “Fall detected. Press and hold button to cancel.” I wanted to cancel, so I pressed and held the button until it flashed green — saving the emergency operator’s precious time. It’s nice to know MobileHelp’s fall detection works well, although, like any fall-detection pendant, it won’t catch 100 percent of falls.

Another feature I was excited to try was the MobileHelp Connect caregiver portal. With this feature, caregivers can keep track of a system’s location, activity, and alert usage. When connected to my system’s fall-detection pendant, my husband could log on to our caregiver portal to track my movement and any inactivity periods. This feature would certainly come in handy for those caring for people from afar. The portal can also be used to set up medication reminders for an extra $5 per month.

Like with most medical alert systems, I didn’t have to pay any up-front costs for MobileHelp. Instead, I rented the equipment, which required a monthly fee. For my MobileHelp Duo system, I paid $41.95 per month plus an additional $10 per month for the fall-detection pendant.

The cost of each system varies, but MobileHelp offers discounts for annual, semi-annual, and quarterly payments. You can also pay on a monthly basis, but it will cost slightly more.

For $5 per month, you can subscribe to MobileHelp Connect Premium, which protects your equipment from damage, guarantees your monitoring costs won’t rise, and offers additional discounts on fall detection.

For more information on MobileHelp’s systems and their costs, take a look at my rundown of MobileHelp costs.

While testing my system, I found that MobileHelp provides quality devices at affordable pricing. I feel wholly confident that MobileHelp devices can help my clients or loved ones age safely in their homes. MobileHelp is easily one of the best medical alert systems.

I’d recommend MobileHelp if you want:

I wouldn’t recommend MobileHelp if you want: