COVID requirements forced adjustments on all, but especially older Americans. With greater susceptibility to the virus and dependence on traditional commerce, senior lifestyles have been more dramatically impacted. As always, our most mature citizens have persevered.

Earlier this year, we documented a dramatic rise in online activity among older Americans, stemming primarily from pandemic conditions. In turning to the internet for finances, food orders, and social media, many Americans aged 60 or older proved they could learn new tricks. We also wanted to know whether this technical dexterity had similarly inspired widespread cell phone use among mature adults. Our research revealed that:

Cutting the Cord on Communication: Nearly All Older Americans Have Gone Cellular

It’s a common comic trope to depict elderly people as reliant on landlines and faxes, but the truth is that almost every older adult now owns a mobile phone. 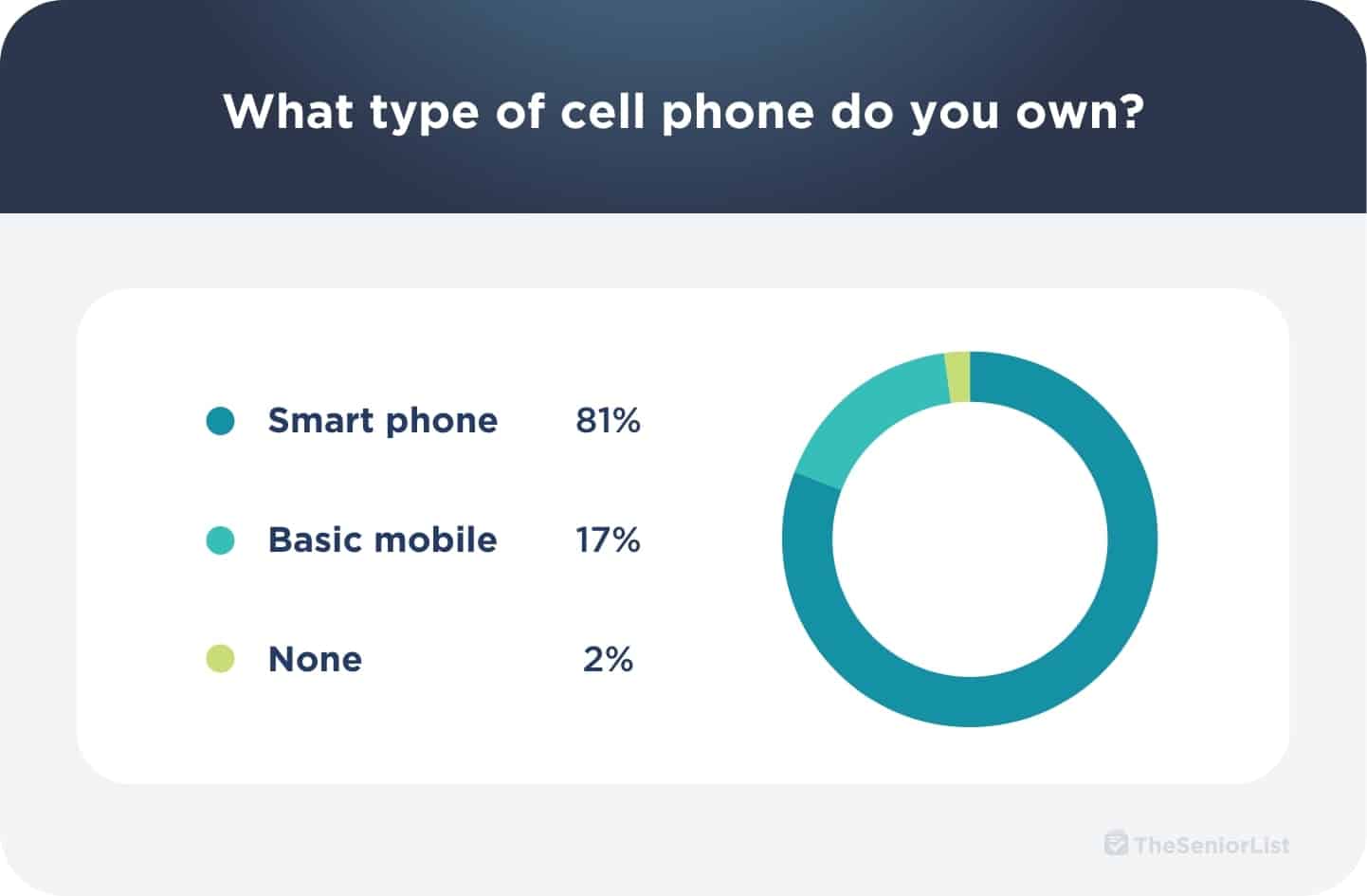 Not only do 98 percent of people aged 60 or older own a mobile phone, but 81 percent have a smartphone. Sixty-one percent use the intuitive Apple iPhone (chosen one of the easiest cell phones for seniors to use), but a significant number possess Android devices.

This level of adoption may be driven by pandemic restrictions. With COVID concerns limiting in-person gatherings, older Americans have turned to alternate methods for staying close with family. Phones sadly don’t allow for hugs from grandchildren, but they offer several options for keeping in touch. 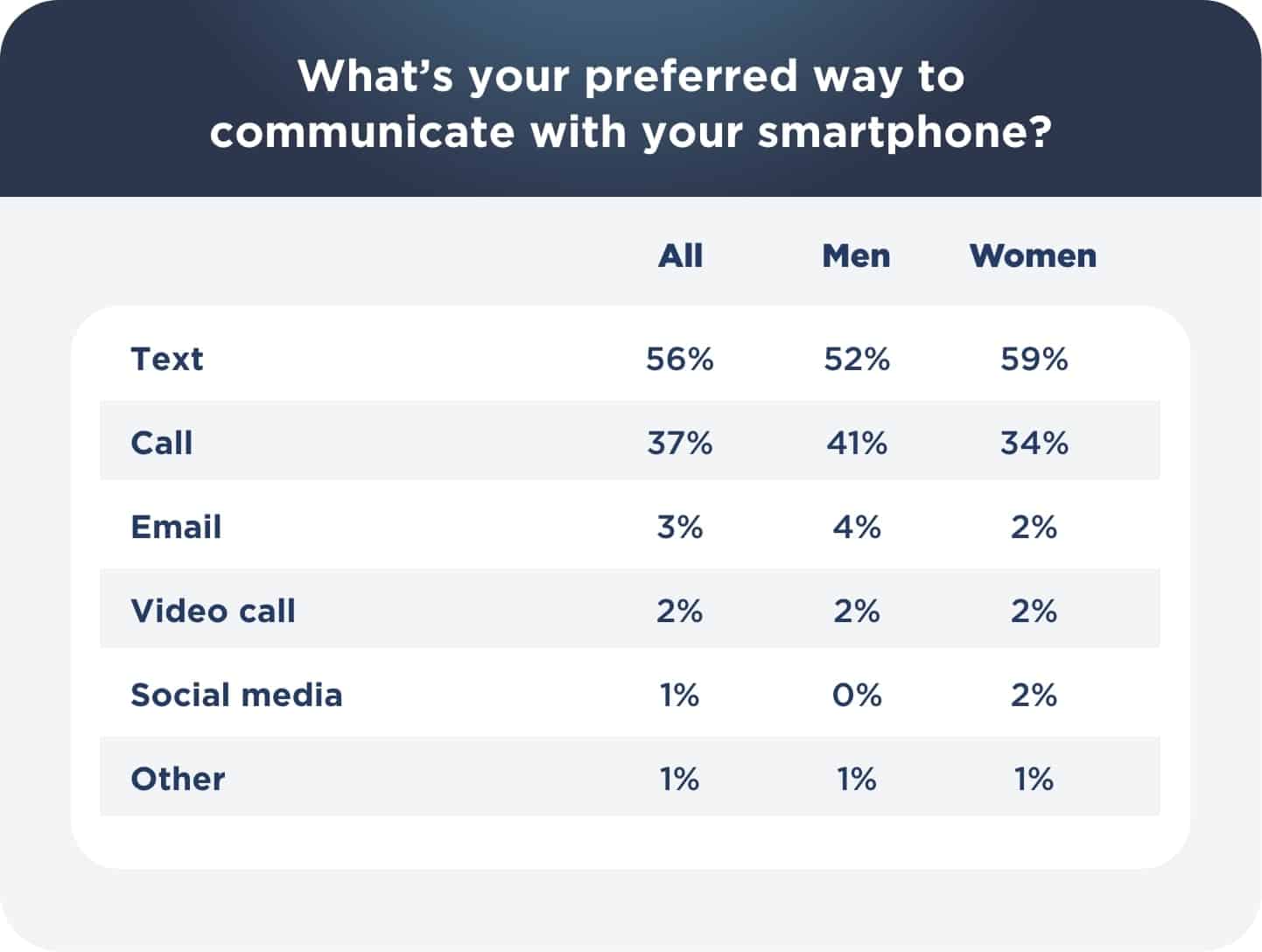 Somewhat surprisingly, texting was the preferred method of communicating among seniors. Older Americans still aren’t as committed to messaging as younger generations (who chose it three-to-one over calling), but a majority of mature adults preferred reaching out with a text.

Texting was not only the favored method but one that was frequently used. Three in four older Americans currently text at least once each day, with nearly two in three doing so several times. 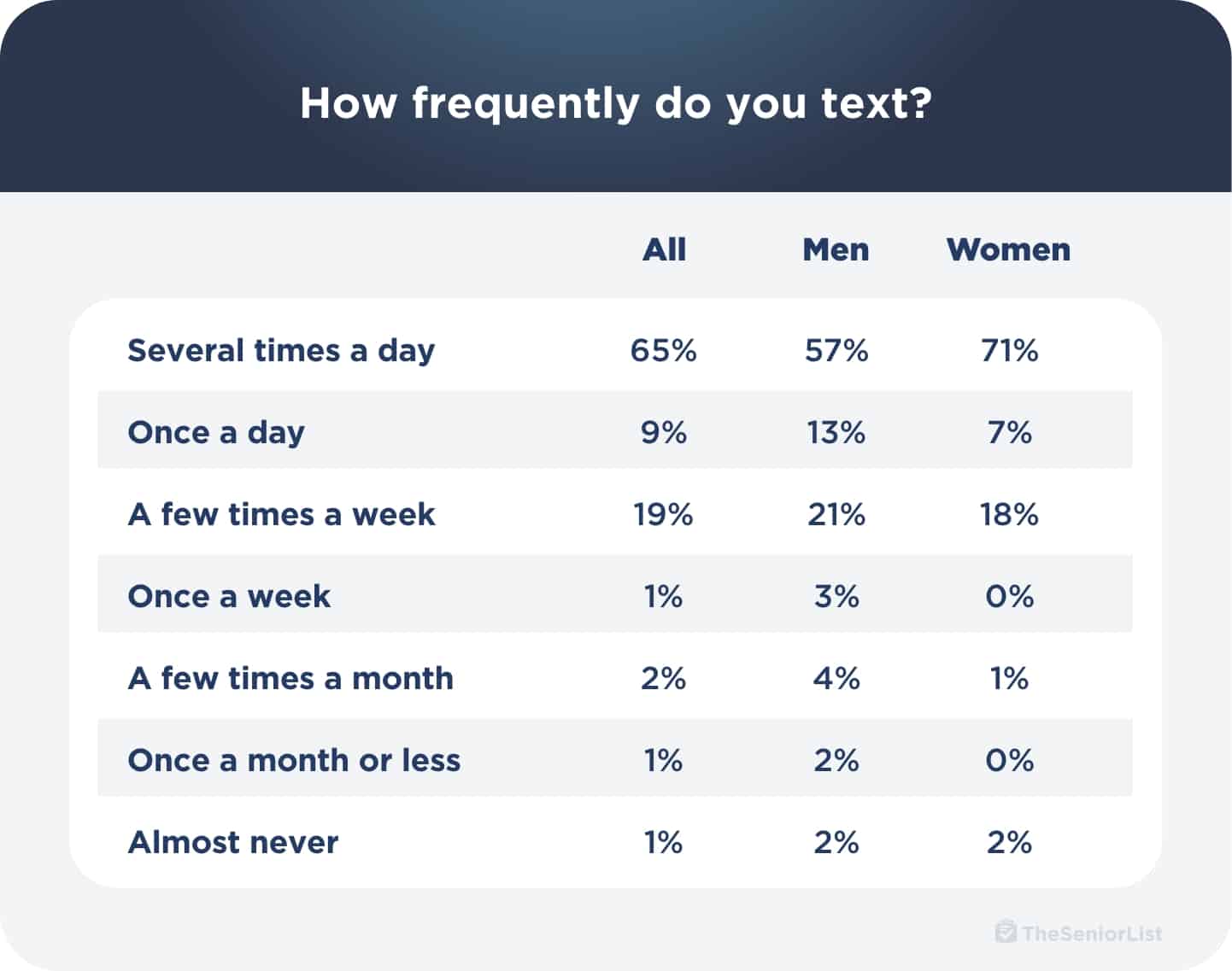 Notably, the amount of texting among older Americans also continues to grow. What might have been a novelty in the pandemic’s first year has increasingly become a habit. Only 4 percent of respondents texted less this year than last, while 46 percent said they sent more messages this year. Yet messaging is far from the only activity occurring on mature adults’ phones.

The Most Popular Apps Among Older Americans

With most older Americans now owning smartphones, it follows that apps have also been embraced by the group. The median number of apps installed by respondents was 25, but around one in four people had downloaded 50 or more apps. 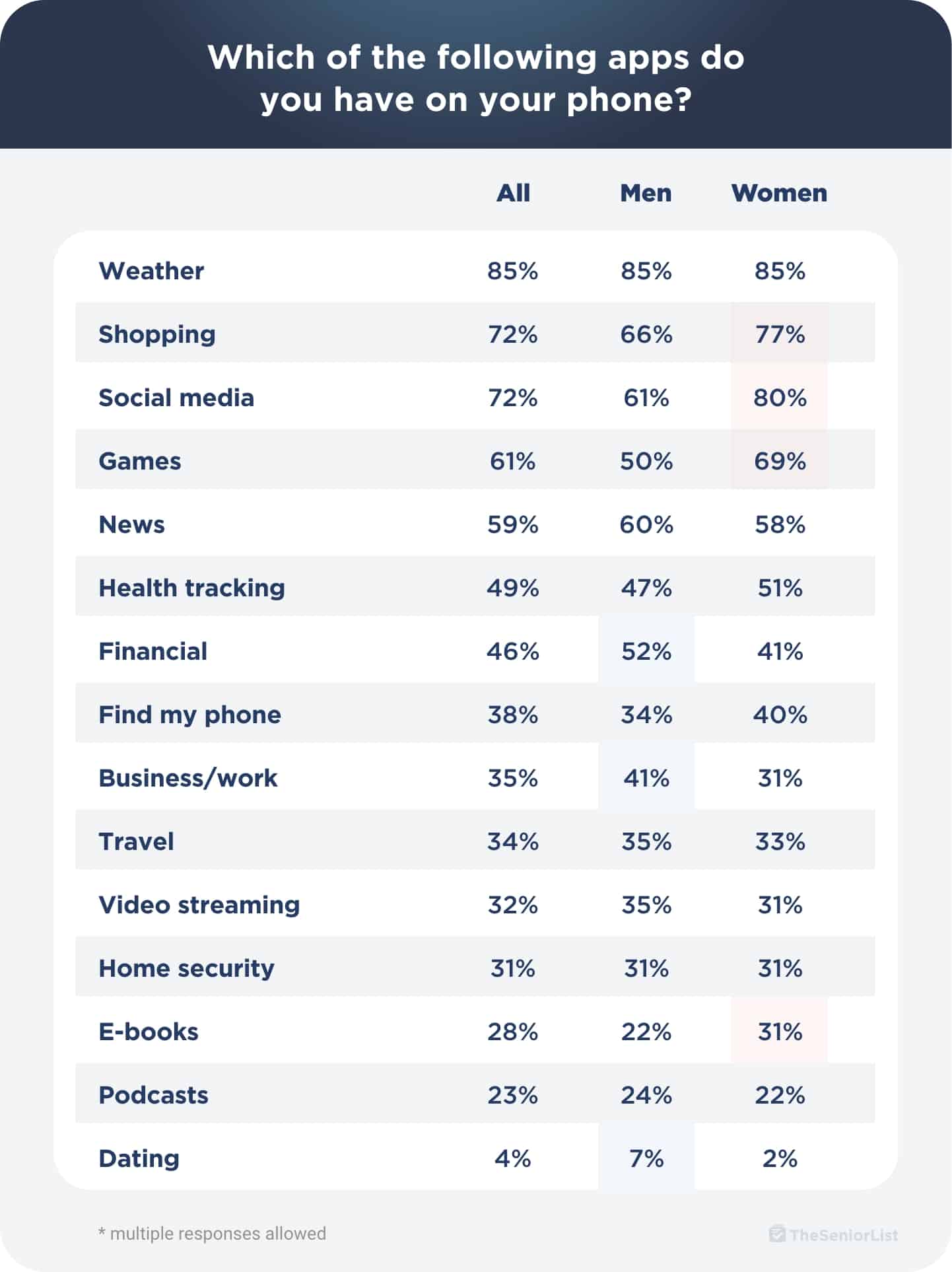 Several gender-based differences in app downloads emerged, but overall, meteorology apps were most common among both sexes.

Among both men and women, social media apps were the programs used most often. 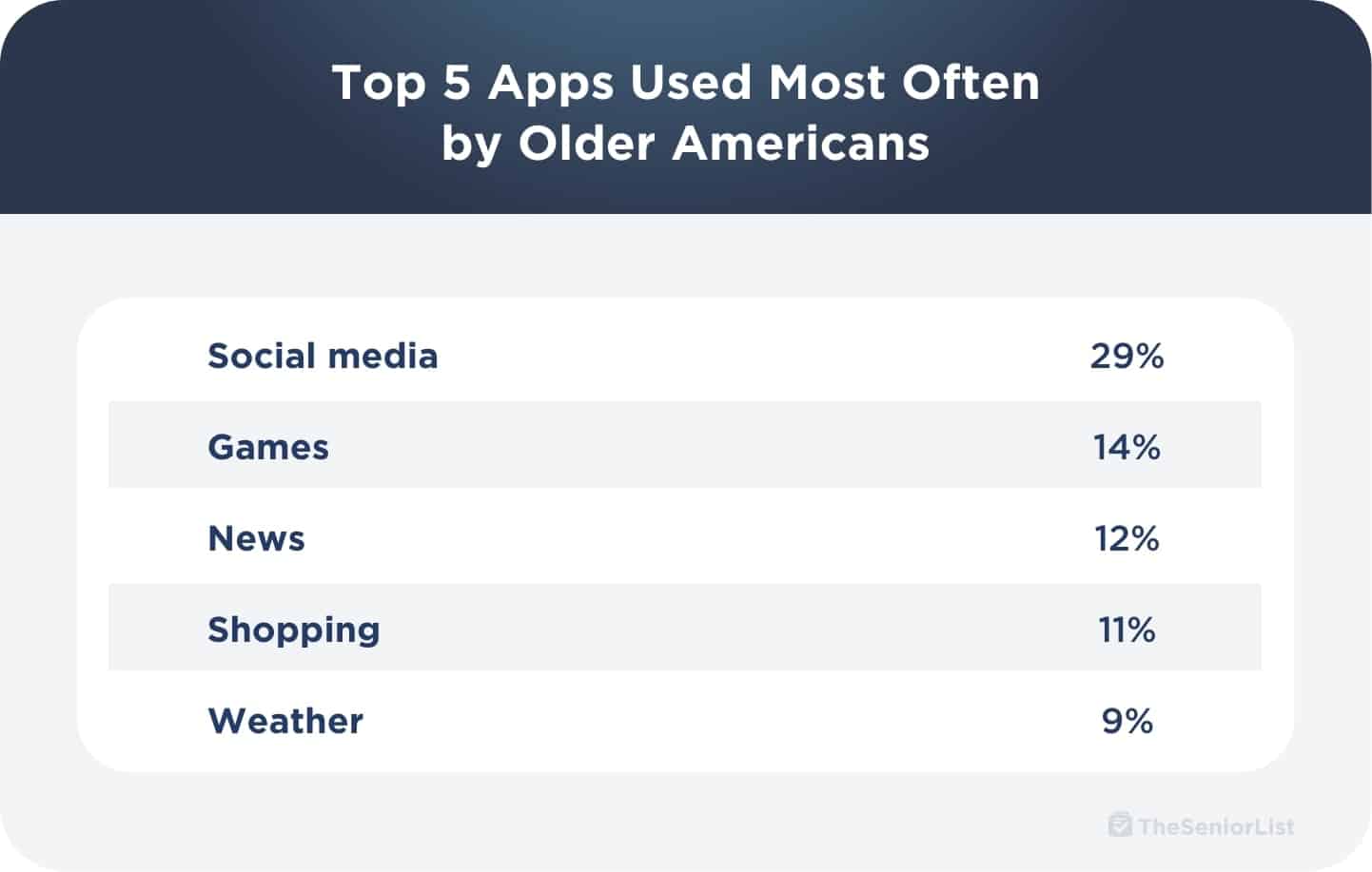 Specifically, Facebook is the favorite icon on older Americans’ smartphones. Despite losing favor among younger users, the platform’s blend of news, entertainment, and family connections keep it popular with the more mature set. 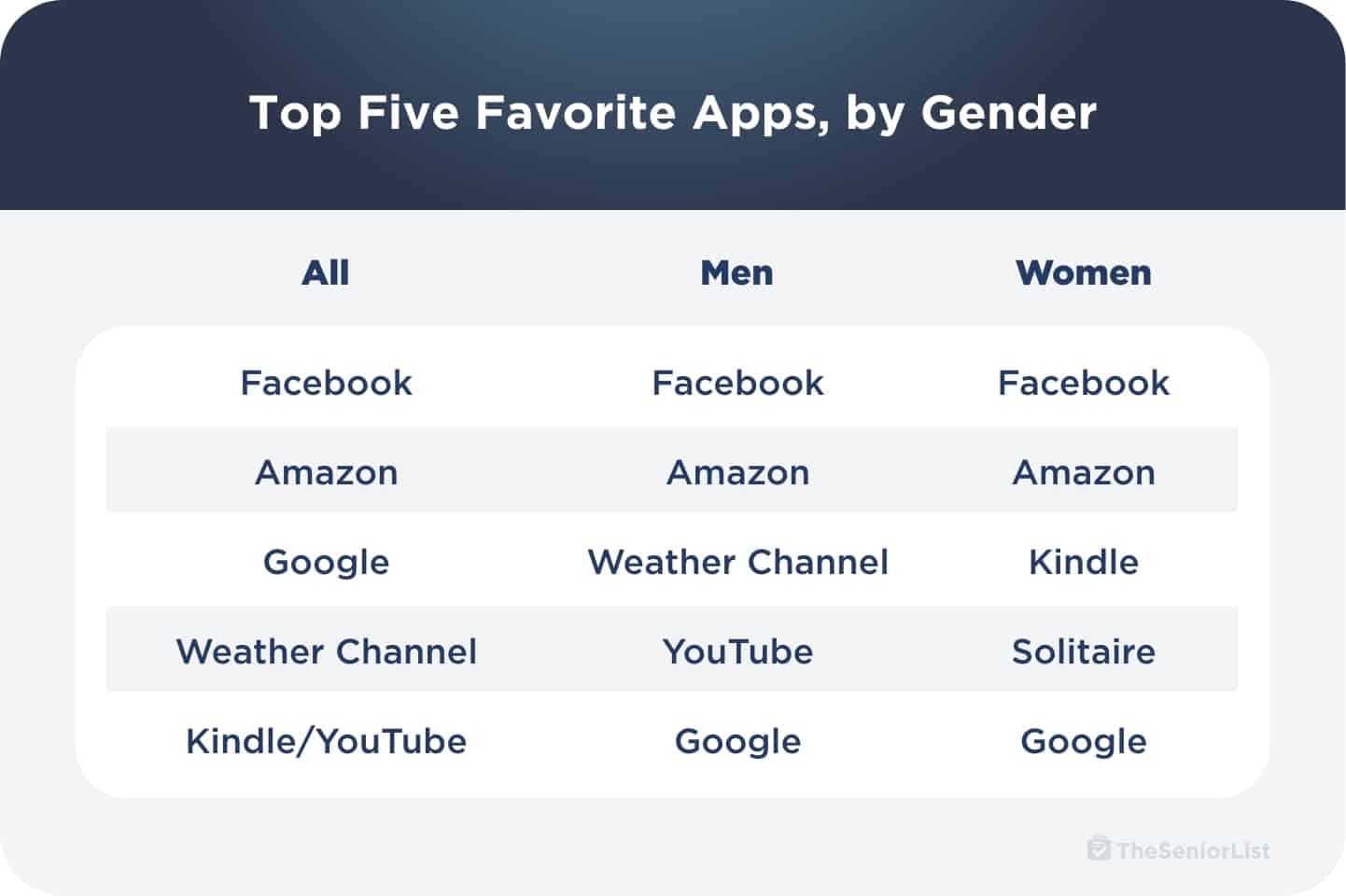 Mobile apps are now so popular with older adults that they’re devoting similar time to their phones as younger users. Two in three Americans aged 60 or older spend 3 or more hours on their phones each day, mirroring the national average of 3 hours, 10 minutes. One in four women reported using their phones for 6 or more hours a day. 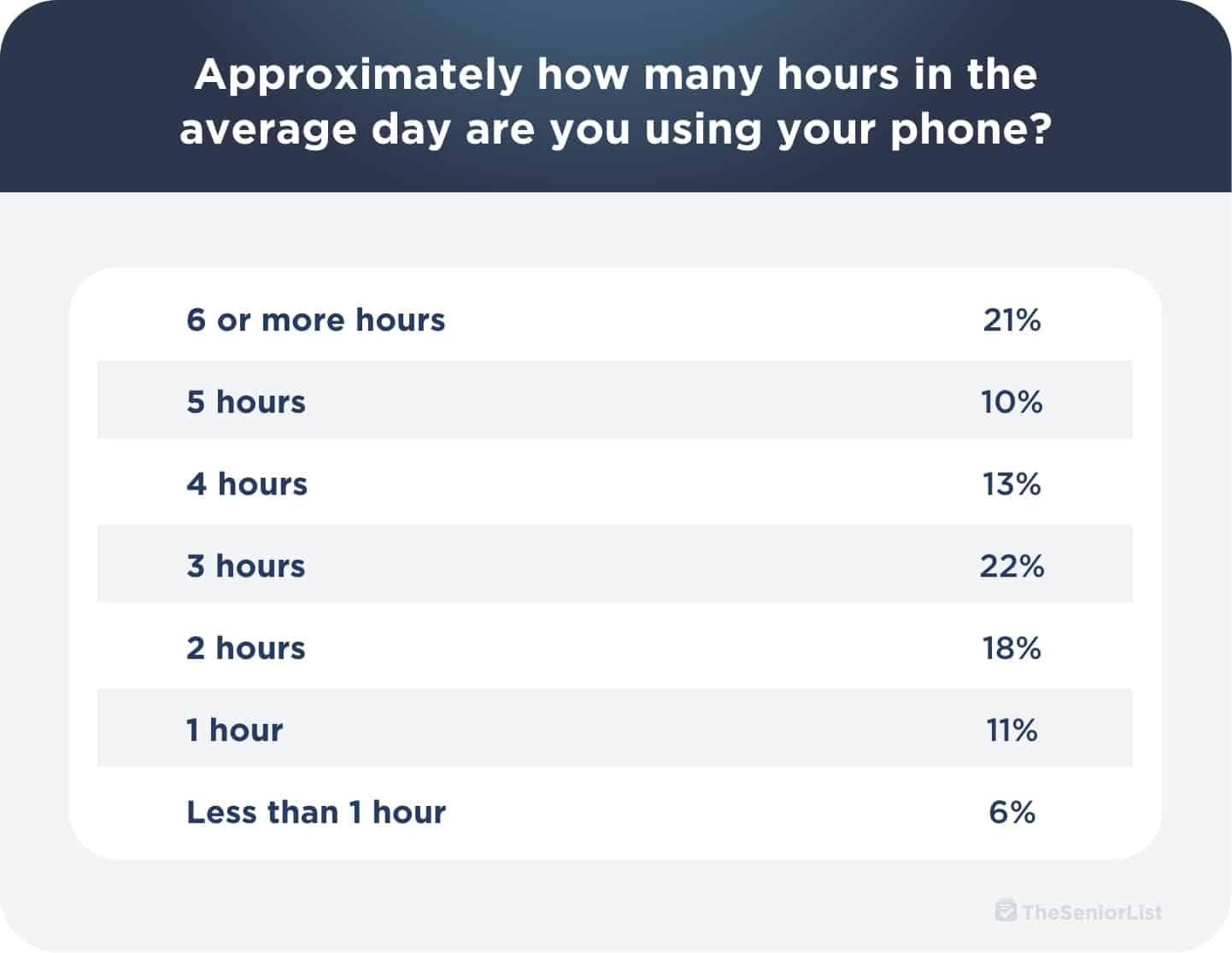 After mastering messaging and downloading dozens of apps, what lies ahead for those with smartphones over 60? Perhaps silver foxes on TikTok and senior Snapchats? Our survey sought to uncover what’s next.

Apps Poised to Pop with Seniors

To determine which downloads are still gaining traction among older Americans, we first assessed which categories were most recently downloaded. Among the 30 percent of smartphone owners who tried new kinds of apps in the past year, these were the most popular types: 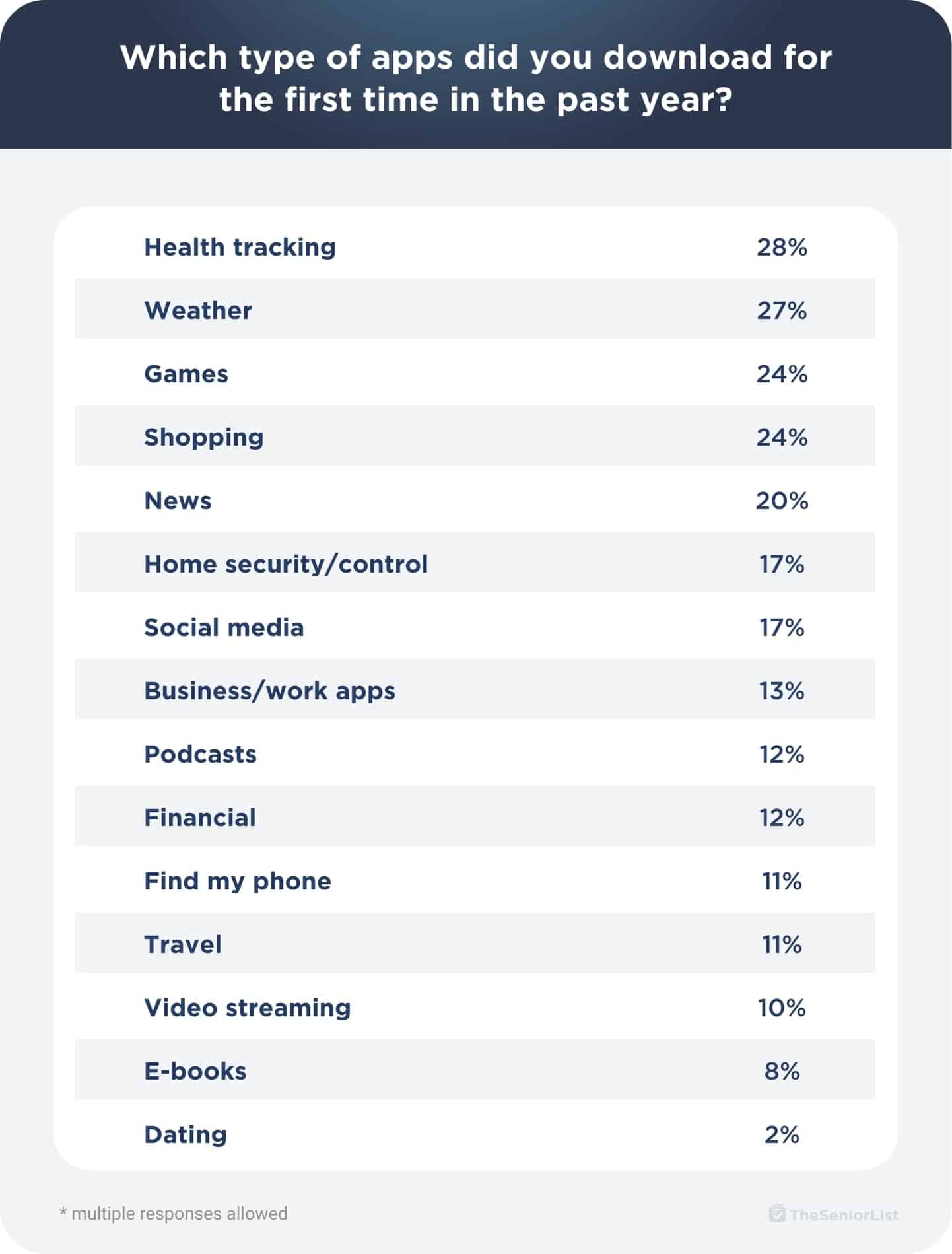 Health tracking programs, home security monitors, podcast players, and dating apps showed the most proportional growth, with at least 15 percent of each category’s users joining in just the past year.

We also wanted to know which apps seniors may begin using in the about willingness to try new apps in the next six months and found that 62 percent were open to exploring different kinds. Among those ready to sample new types of platforms, these fields generated the most interest: 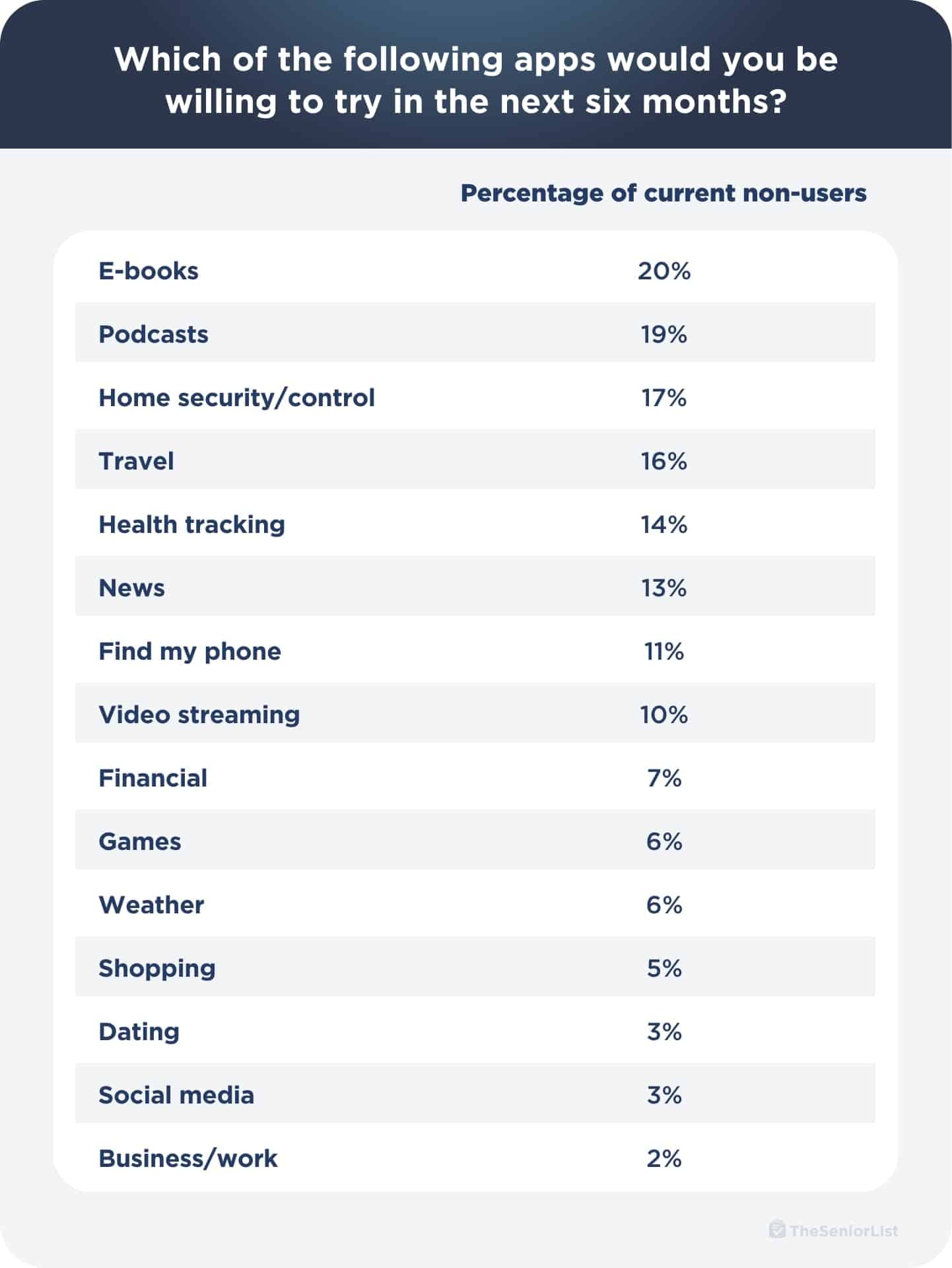 E-books, podcasts, and video streaming all demonstrate untapped potential among seniors, indicating the appeal of additional entertainment options, while the desire to download new travel apps likely reflects the broad hope that trips and tourism may soon return to real life.

Older Americans looking to stay in touch with loved ones and keep life convenient under pandemic restrictions not only turned to the internet but did so with the help of smartphones.

Unable to dissuade youngsters from obsessing over screens, it seems many seniors may have decided to join the crowd.

Those over 60 have taken to regularly texting, joining social media, and spending hours on devices each day, with the frequency of messaging expanding year-over-year and interest in new apps still growing.

Additionally, service providers have noticed – or perhaps fueled – the expansion of this maturing market with excellent cell plans for senior customers, so usage is unlikely to weaken.

In December 2021, TheSeniorList conducted an online survey of 532 U.S. residents aged 60 or older. Our panel was representative of the gender proportions for this age group (56% women, 44% men).